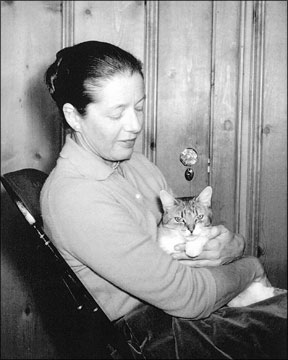 My dear friend, Dr. Jean Holzworth, a lifelong devotee of cats and a veterinarian of immeasurable importance to feline medicine, passed away this January. She would have been 92 years old had she survived until March 26 of this year. Dr. Holzworth received her bachelors degree, Masters degree and PhD in Latin from Bryn Mawr College, but after a beloved cats death in 1943 from feline panleukopenia (for which no vaccine then existed), she turned from teaching at Mount Holyoke College to veterinary college at Cornell University, from which she received her DVM degree in 1950.

From 1950 to 1986, she specialized in caring for cats at the Angell Memorial Animal Hospital of the Massachusetts S.P.C.A. in Boston. (She told me that, shortly after her arrival at Angell, the director at the time suggested she devote herself to cats

after she misidentified a clients Samoyed dog and called it a “spitz” much to the chagrin of the owner.) Dr. Holzworth was one of the first veterinarians to recognize hyperthyroidism in cats, along with feline infectious peritonitis (FIP). During her decades serving cats at Angell, she and her colleagues published many studies of important feline disorders.

Dr. Holzworth once revealed, “Pictures of my forebears, and of me at various ages, show us cuddling cats. The farm cats of my childhood were prone to fatal fits in bedroom closets (a propensity I am still at a loss to explain), and at 10 years I composed a Cats Funeral March, of which, unhappily, there were many performances …. Passionate cat lovers are legion, but very few are lucky enough to make cats their life work. I am one of these….”

A genuinely humble person, her life was guided by her deep love of cats and respect for her colleagues. She also possessed a keen wit: In a 1981 issue of

Time magazine, she noted, “When you talk about convenience, the advent of cat litter is comparable to the invention of the electric light bulb.”

Not long ago, Dr. Holzworth wrote the following to me in a letter and requested that I share this with CatWatch readers:

The appearance of a coyote in Central Park on the island of Manhattan is a forceful reminder that, once only known in the Great Plains west of the Mississippi, coyotes are now proliferating in every state of the union but Hawaii. As they reduce the small game populations that are their natural prey, they have discovered that domestic cats (and small dogs) make the easiest and tastiest meals. Wouldnt it be beneficial for

CatWatch readers to be aware of this danger?

The adult coyotes are now coming out of winter retirement to hunt in order to feed their young born this spring. Once hunting mostly from dusk to early morning, they now appear boldly at anytime of day in rural and even suburban yards where owners may witness the snatching of a pet. More often a cat simply disappears without a trace, and animal control officers believe that coyotes are often responsible for the numerous “missing cat” notices in newspapers and community bulletin boards.

For maximum safety, cats and small dogs should go out only on a leash or into an area that is inaccessible to coyotes. Even a once-free-roaming cat will adapt in time to this unnatural lifestyle, and will also avoid other outdoor hazards.