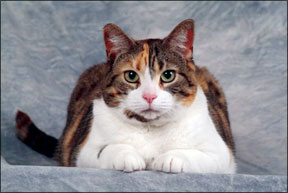 Many of you will recall that Dr. Mew, our longtime feline companion at the Cornell Feline Health Center, passed away earlier this year. We werent actively interviewing to fill his vacated position, but Elizabeth, the lovely tricolored kitty pictured here, had recently lost her previous job. We offered her a temporary position until she proved her capacity to fulfill the responsibilities which she most certainly has and she recently accepted our offer of full-time, permanent employment as our feline ambassador.

Her picture betrays her background. Youll notice that her right ear is tipped, a common way of identifying a feral cat thats been trapped, then spayed or neutered (they need to be clearly identifiable so that, if retrapped, theyre not mistakenly taken to surgery again). Shed been dumped at a farm near here when she was just beyond kittenhood, then she herself was trapped, spayed and ear-tipped. When she awoke from her anesthetic, it was clear she was very friendly and quite socialized to humans, so she was adopted by the person who coordinated her rescue and lived in a loving household for several years.

Subsequently, my mother, who was living in an assisted living facility, lost her longtime feline companion, so Elizabeth volunteered to serve in her stead. She embraced her new position vigorously. Elizabeth is an affable kitty, and Im sure my mother received many more visitors than she would have without the attraction of her feline sidekick. Ultimately, though, Mom required care that the assisted living facility was not able to deliver, so relocation to a new home became necessary. Wed hoped that Elizabeth could accompany my mother, but the six available feline slots at the new facility were already filled, forcing Elizabeth to join the ranks of the unemployed. Fortunately, her extensive resume worked in her favor, and she quickly found employment a few months after Mewsers position opened up. Were all very happy with her job performance.

Youll note that Lizzie has a bit of a weight problem my mother says she has “civil-service hips” from having a less-than-active desk job. Weve put her on a weight-loss program since shes become a Cornell employee, and so far shes doing quite well. Ill chronicle her success in future issues of CatWatch. v