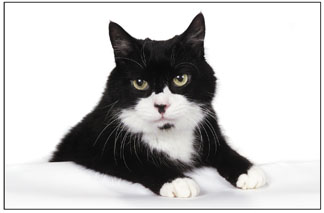 You all know Dr. Mew (aka, the Mewser, Mewie, Little Buddy,…), the beloved black-and-white tuxedo kitty whos lived at the Cornell Feline Health Center for most of his almost 17 years. His image (along with that of his much less attractive officemate) has graced this column since its appearance in 1997. His pictures appear in many of our publications, and although hes never had much patience with photographers, fast shutter speeds have allowed us to capture his charming features – usually! Hed much rather stay in my office with me, typically less than an arms length away in his own office chair, or on my lap helping me type.

With heavy heart, I must inform you that he passed away on Monday morning, May 1, 2006. Hed been successfully battling inflammatory bowel disease (IBD) for several years, but lately he experienced a dramatic downturn. An extensive diagnostic workup at the Cornell University Hospital for Animals confirmed what wed feared: Hed contracted intestinal lymphoma, a not-uncommon consequence of feline IBD.

In spite of the diagnosis, we were hopeful that hed respond favorably to treatment. His particular form of the disease – low-grade T-cell lymphoma – is a highly treatable condition in cats. A good quality of life extending up to two years is a reasonable expectation, and the side effects of treatment are quite manageable. But such was not to be for the good Dr. Mew: His cancer progressed rapidly and likely began to affect other organs. (Rightly or wrongly, I chose not to have a post-mortem examination performed, so well never know for sure.) He fought bravely and was responding to treatment in promising fashion, but his condition rapidly deteriorated, and he suffered cardiac arrest during his stay in the intensive care unit.

Dr. Mew came to us in a rather unusual way, back in 1990. His mother was infected with feline immunodeficiency virus (FIV), and he and his littermates were donated to a veterinarian studying the virus here at Cornell. (And no, we no longer accept donations of kittens, so dont ask!) He and his littermates tested positive too, but since the virus had been discovered only a few years before, we were still learning about how commonly the virus is transmitted from infected mothers to their kittens. As it turns out, it happens only rarely. Because FIV tests look for antibody produced in response to infection, kittens of infected mothers usually test positive as well (from the antibody they ingest in the milk), but only temporarily.  Dr. Mew had countless tests to make sure he was clean over the years, and he was indeed uninfected, as were his littermates.

We found homes for all the kittens, but the Cornell Feline Health Center got the pick of the litter.  Wed been interviewing for a feline staff member, and he really settled into his job.  The origin of his name? We held a name-the-cat contest, and for a small donation, members of the Center could offer suggestions.  We were offered many cute potential names, but Dr. Mew was the one that fit the best: His personality matched the appellation.

Up until the end, he was happy to sit on my lap, purring contentedly as always. I think he still enjoyed being a cat, and being with the people who loved him. Im glad we gave him every possible chance to fight his disease. Euthanasia was not an option I considered; even though he felt quite ill, I dont believe he was suffering, and in many ways he was improving and giving us hope.  But his last moments came and passed very quickly.  He didnt really give us a chance to ease his going.

The staff of the Cornell Feline Health Center and I extend our gratitude to the numerous people involved in the Mewsers care.  We are deeply appreciative of the skillful and dedicated faculty, staff and students at the Cornell University Hospital for Animals who generously gave him their best. They make me proud to be a veterinarian and their colleague.