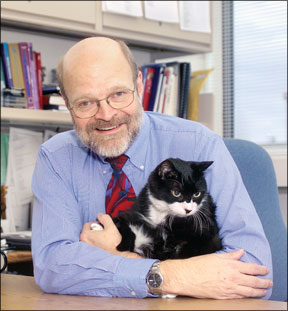 We are enormously saddened to report an immeasurable loss to the feline community. James R. Richards, DVM, the author of this column, editor-in-chief of

CatWatch and director of the Cornell Feline Health Center, died following a motorcycle accident near his home on April 22. He was 58. Next to his family – his

adored wife Anita and their two grown sons, Jesse and Seth – his church life and his widely influential work on behalf of “kitties” everywhere, Jim found no greater joy on earth than to take to the two-lane roads of the open countryside on his bike. Jim usually rode with friends and was, according to one of his frequent riding companions, a superbly skilled, cautious and graceful rider. But despite his best efforts, he was unable to avoid the stray cat that dashed from a barn and into his path on the first warm and sunny Sunday of the year.

“Jim was the quintessential feline expert in the country, but beyond that, he was a warm, caring and wonderful person,” said Donald F. Smith, the Austin O. Hooey Dean of Cornells veterinary college. “He touched and improved the lives of an untold number of students at the College of Veterinary Medicine and other individuals, not only at Cornell but in the pet world at large.”

A past president of the American Association of Feline Practitioners, Jim Richards was a nationally recognized authority on vaccination protocols for cats. After cats began turning up in the 1990s with sarcomas at the site of vaccinations, he created, and then led, the Vaccine-Associated Feline Sarcoma Task Force. He lectured on feline topics to Cornells veterinary students and directed the Dr. Louis J. Camuti Memorial Feline Consultation and Diagnostic Service, often giving his personal attention to the veterinarians and cat owners who called 1-800-KITTY-DR. He served as a faculty advisor to the Cornell Christian Faculty and Staff Forum and as an advisor to Alley Cat Allies, a trap-neuter-return program aimed at reducing populations of feral cats. He authored the ASPCA Complete Guide to Cats and was a consulting editor and contributor to The Cornell Book of Cats.

Despite his very notable professional contributions, Jim Richards will probably be remembered best and longest for the unusual depth of his humanity. He touched many hundreds, and probably thousands, of people with his warm collegiality, loving friendship, genuine compassion, easy and good-humored grace and expert guidance. A number of those people – from close colleagues to cat owners who knew him only from seeing him on television or reading this column – expressed their fondness for Jim by posting remembrances on the Cornell Feline Health Centers website, www.vet.cornell.edu/fhc.

One who captured some of Jims essence especially well was Bob Naum, a Cornell DVM who practiced with Jim when both were starting out as veterinarians. He wrote, “Jim has always been beyond nice – which many people wear on the surface. He was truly, truly kind – and that goes to the bone. We all recognized the personal magic in his manner and would watch with amusement as the fractious, Impossible to handle!! cats would seem dumbfounded by this man, who would just soothe and caress the bad attitude right out of them. His effect on people was much the same, and few came away untouched by his overpowering generosity of spirit…

The Richards family has very kindly allowed the Feline Health Center to post a video recording of Jims memorial service on their website. Four hundred or more people attended the service.

Those friends who spoke offered wonderful and discerningly nuanced portraits of a man who lived every day with joy and as an opportunity to give the best of himself to others.

The Richards family has requested that memorial gifts be directed to the Cornell Feline Health Center, James R. Richards Memorial Fund, College of Veterinary Medicine, Box 39, Ithaca, NY 14853. Gifts may also be made online at the Web address above.

Efforts are underway at Cornell to appoint an interim director of the Feline Health Center and to recruit a permanent director. That person is also expected to serve as the next editor-in-chief of

CatWatch. Though no one will ever replace Jim Richards, we can all take heart in the knowledge that the veterinary profession is filled with exceptional human beings, and that one of them will be ready with the knowledge, skills, heart and inspiration to start building on Jim Richardss remarkable legacy. v