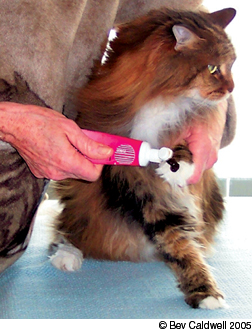 So whats the real deal with hairballs? Ive lived with cats for years and have always assumed that its normal for them to hack one up every now and then. But recently I heard of a cat that got one stuck in her intestine, and the veterinarian had to go in and take it out surgically. Should I be more concerned about hairballs? If so, how can I prevent them? Ive seen special cat foods on the market that claim to prevent hairballs.  Should I be feeding this kind of diet to my cats, or is there a better way to deal with the problem?

The medical term for a hairball is trichobezoar (pronounced TRYK-o-BEE-zor), one of my favorite funny- sounding medical words. My all-time favorite is the word for tummy grumbles, borborygmus (pronounced BOR-buh-RIG-mus).  What a great example of onomatopoeia. (Ill let you check the dictionary for that one!)

But back to the task at hand. Cats ingest fur when they groom themselves – you know, the tongue-as-a-hairbrush explanation. The hair usually passes inconsequentially through the gastrointestinal (GI) tract and exits the body in the feces. But if it doesnt go all the way through the GI tract, it can collect into a mat of hair – most often in the stomach – and is subsequently vomited up.

Some well-meaning folks attribute just about any illness one can imagine to hairballs, so whenever their cat is ailing, they dose her with some kind of hairball remedy. The standard remedies are safe enough, but by misplacing the blame, the cats person may be delaying treatment of a serious condition. And remember, if a cat is vomiting for any reason whatsoever, any hair that happens to be in the stomach at the time will come up as well.  The tendency is to blame the hair in the stomach for the vomiting, when, in fact, it was just an innocent bystander; the vomiting was from another cause.

Sometimes a cause for concern
Hair ingestion is not always innocuous, however. Excessive accumulation of hair in the GI tract can obstruct the esophagus, the stomach or the small intestine. Large quantities of hair in the colon (large intestine) can cause constipation or significant inflammation.

Veterinarians at the University of Sydney in Australia reported being presented with five cats over a two-year period, each suffering from a partial or a complete intestinal obstruction caused by hairballs. Persistent vomiting was the most typical finding. One of these cats had been grooming excessively because of an itchy skin condition associated with a heavy flea infestation, one had swallowed burr-like plant material entangled with hair, another had extremely long and matted hair and another was suspected of having a diseased section of intestine that failed to propel material outward in a normal fashion.

In reports from other veterinarians, hairballs have been found to lodge in abnormally narrowed or scarred segments of the esophagus or intestine, and a few cats with massive (softball-sized and larger) hairballs in the stomach probably have an underlying disease that inhibits normal stomach muscle contractions.

Prevention is best
Hairballs are more disgusting than dangerous for most healthy cats, but its always wise to try to minimize their formation. Periodic grooming by the cats person – at least once weekly for most cats – is the best prevention; hair trapped in a brush or comb wont be swallowed, and frequently groomed fur is less likely to mat. If necessary, carefully and gently remove any hair mats or burrs that a kitty could pull out and swallow whole.  (You may need a veterinarians or a groomers assistance with this.)

Cats cursed with hairball hacking more often than once every few weeks may benefit from periodic administration of one of the many brands of lubricant medications, the idea being that hair made slippery by the petroleum-based lubricant will more easily pass through the intestine. (Warning: Dont administer mineral oil to a cat! It can run down the wrong pipe and end up in the lungs instead of the stomach.) Feeding a hairball preventative diet may be worth a try. These types of diets typically contain dietary fiber that purportedly eases passage of hair through the GI tract.

Most importantly, if your cat is vomiting persistently or is acting sick in any other way, dont automatically blame it on a hairball. Have the kitty examined by your veterinarian right away.