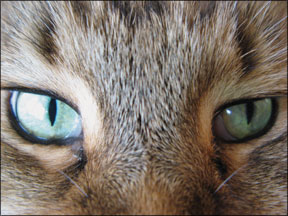 Dear Elizabeth: I was admiring my cat, Pearls, eyes and wondered why the shape of her pupil is so different from mine?

Thank you for your question about Pearls eyes. We cats are special in many ways, of course, but our eyes have always been particularly interesting to people – just think of the Egyptians fascination with eye make-up which was meant to make them appear more like … me!

Pearls pupil shape is unique to the family Felidae and is meant to maximize vision in low light. Did you know that cats can see at eight times dimmer illumination than humans? This gift is part of our heritage as nocturnal, carnivorous mammals. Our ancestors success in the wild depended on being able to hunt at dusk and dawn, times of day when many potential dinner species are most active. Adaptations to the eye improved our wild relatives night vision. For house-cats like me, these adaptations enable me to hunt wild bugs in the closet at night, allow me to startle people with glow-in-the-dark reflective eyes and are part of what make me uniquely feline.

Pupil shape is the most obvious characteristic adapted for improving night vision. Scientists have found that an elliptical-shaped pupil can open larger, and more quickly than a circular pupil as in humans (and other lesser species, like dogs!). The elliptical pupil allows more light into the back of the eye to stimulate the visual receptor cells in the retina.

The retina is another area of feline ocular adaptation. Visual photoreceptor cells in the retina are of two types: rods and cones. In diurnal species (those most active during daylight hours) such as humans, the retina is populated most heavily by cones. Cones respond to a wide range of light wavelengths which allows color vision; however, they are relatively insensitive – they require a large amount of light to achieve stimulation. Rods, on the other hand, are very sensitive to light, but only to a narrow range of wavelengths. Cats and other species that have a preponderance of rods populating their retinas can see very well in conditions of low light, but can detect only a limited range of colors. Scientists tell us that cats can appreciate the short blue and yellow wavelengths but cant differentiate among red, brown, and green wavelengths. We dont consider this a problem, though. We are very proud of our ability to tiptoe around in the dead of night and love our human friends no matter what color socks they wear.

Another characteristic of Pearls eyes that may interest you is the striking way they glow or shine yellow-green when you look at her at night. This is due to the presence of a specialized reflecting layer behind the retina called the tapetum lucidum. It is an important structure in the eye of many nocturnal species, and is particularly well-developed in cats. When light passes through the pupil and hits the photoreceptors in the retina, most photons interact with receptor cells. In animals with a tapetum lucidum, photons that miss and fail to interact with a rod or cone are recycled! After passing through the retina they are reflected by the tapetum lucidum and have a second chance of stimulating a photoreceptor cell. You see the effects of this photon recycling when you admire Pearls beautiful eyes shining at you from the back of your closet at night.

Pearl comes from a long line of nocturnal carnivores, exquisitely adapted to hunting during times of low ambient light. The relatively large size of her eyes, the dense population of rods in her retina, and the tapetum lucidum layer behind the retina are all adaptations aimed at maximizing night vision. Pearls pupil shape is one of her most obvious night vision adaptations and one of the characteristics that makes her (and me) so beautiful.