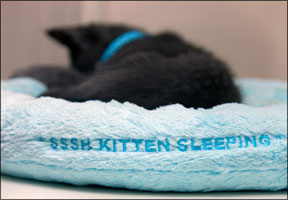 Q. Dear Elizabeth: We adopted the cutest little kitten from our local shelter last month. “Bob” apparently was exposed to feline distemper virus and, as a result, he wobbles and shakes when he walks, and falls over when he plays. He gets the most adorable determined look on his face when he wants to do something – and although it may take him longer to accomplish a task, we cant help but admire his persistent, sunny nature. Can you tell me about this condition he has and will he show any signs of improvement as he ages?

A. Kudos to you for adopting a special needs little fella. Bob most likely was exposed to feline

panleukopenia virus, sometimes called feline distemper or feline parvo virus, either shortly before or shortly after birth. This exposure caused a condition called cerebellar hypoplasia, or underdevelopment of the cerebellum. The cerebellum is located at the base of the brain, is responsible for coordination of movement and plays a role in balance. Kittens that are exposed to panleukopenia virus during development of the cerebellum (generally the last two weeks of gestation up until about four weeks of age) wind up with a cerebellum that is too small and doesnt function properly. Cerebellar hypoplasia can result from exposure to panleukopenia virus itself or from modified live panleukopenia vaccines given to cats during pregnancy or to kittens prior to four weeks of age.

Kittens with cerebellar hypoplasia usually appear normal at birth but show signs as soon as they begin to toddle around. They usually have a “base wide” stance, meaning they stand with their legs splayed out to provide support. W hen they attempt to move, they tremor and have exaggerated, uncoordinated movements, and they may lose their balance and fall over. They often lean up against walls for support. While these kittens may appear almost normal when theyre sitting still, the tremors become apparent as they attempt any sort of movement. Symptoms vary in severity but many of these “shaky” kittens, with a little extra care and attention, have a good quality of life and make delightful companions.

There are things you can do to improve Bobs quality of life. Protecting these kittens from injury is important especially as they learn to ambulate, so be sure to block off stairways or areas where Bob can fall from, and never leave him up on couches or beds unattended. It goes without saying that Bob should be an indoor only cat. Many cerebellar hypoplasia kitties find that a litter box with a low opening and high sides is easier to get into and provides supportive walls they can lean on. Heavy spill proof dishes help to keep the food in the dish instead of scattered around on the floor. If Bob has trouble drinking enough water, feed him canned food which will decrease the amount of water he needs to drink, and try elevating the water dish a few inches. Finally, encourage him to play with all sorts of toys … the more he moves about, the better will be his muscle development and the quicker he will learn to cope with his disability.

There are a few on-line communities for owners of cats with cerebellar hypoplasia. Here are two you might find helpful:

Unfortunately, Bob will not outgrow this condition as his cerebellum has been permanently damaged. The good news, though, is that his condition wont progress and he may overcome some of his difficulties as he learns to compensate for his lack of motor skills. He was born this way and doesnt know any other way to live, so he will continue to cope with his condition without any sort of self-pity. I dare say we can all learn a thing or two from Bobs happy-go-lucky attitude! Love, Elizabeth