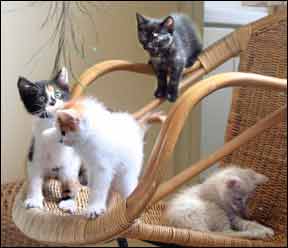 Q. Dear Elizabeth: My cat, Abby, recently had a litter of kittens — and the kittens are so different from each other in terms of size, color and personality, I think they must have come from different fathers. One kitten is fine-boned, white with grey patches and long-haired; while two of the others are short-haired, stocky and black.

Abby showed up at my door, pregnant, so I have no idea if she actually mated with more than one male. Is it possible that the kittens have different dads? And, as an aside, what is an average size litter for a cat? Abby had three kittens, which I think of as average, but the cat down the road had nine kittens! Is that some sort of record?

A. Not only is it possible, it’s quite likely that your new brood has been sired by different males. Congratulations to you, by the way, on your new babies and many thanks for taking in a cat in need!

Female cats in heat can be quite promiscuous and will often mate with more than one male, a survival mechanism designed to increase the chances that mating will result in pregnancy. Studies show cats that mate only once get pregnant just 50 percent of the time. Cats are induced ovulators, meaning that the act of mating triggers egg release or ovulation. When cats ovulate, multiple eggs are usually released. Not all of the eggs are necessarily fertilized following a mating. Unfertilized eggs can be fertilized during a subsequent mating, or the next mating may result in the release of even more eggs which are then available for fertilization.

It’s even possible for all of the kittens in a litter to have different fathers. One study showed that 80 percent of litters produced by stray cats in an urban environment had multiple sires. There’s a term which applies to this situation — superfecundation — which is used when more than one male fathers offspring in a single litter. And it’s not just cats that can have littermates with differing sires. Dogs, less often than cats, can also have multiple fathers for a given litter and even some humans have produced twins which have different fathers. This situation occurs far less commonly in humans for various reasons, including the fact that multiple eggs are not commonly released during one cycle in women, and cultural values have a bearing on how many mates a woman may have at any one time.

However, just because kittens vary in appearance or disposition, we can’t assume that the differences are due to the kittens having differing sires. Just look around at human families that you know … for all the look-alike brothers and sisters you may see, how many siblings appear to have nothing in common with each other, despite having the exact same parents?

With cats, variations in coat color and type are dependent on multiple genes and conditions within the womb, while personality traits are influenced by experiences after birth. Even clones — kittens which are identical genetic copies of one parent — may differ tremendously from the parent they are cloned from. For situations where it is imperative to know the sire of a certain kitten (ie. for breed registrations), DNA testing can be done to establish parentage … the test, though, requires a DNA sample (either a blood test or a swab of the inside cheek) from the mom, the dad and the kitten, and in many cases, the dad may have been a wandering, unknown tomcat. For most situations, it’s fun and less expensive to merely speculate on what may have occurred when no one was watching!

As far as numbers go, the average number of kittens per litter is three for first-time moms, and four to five kittens for moms who have had previous one to eight kittens. Your neighbor’s cat certainly had more kittens than most momma cats, but she’s nowhere near the record. That honor goes to Tarawood Antigone, a Burmese who gave birth to 19 kittens in 1970. Now that’s a lot of babies to raise! Love, Elizabeth