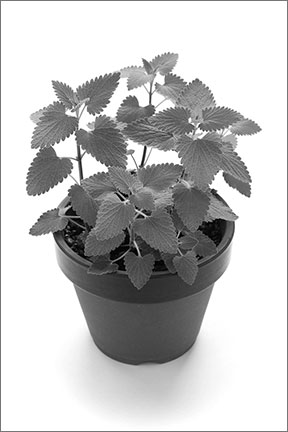 Q. We have two young male domestic shorthaired cats we love dearly, and we are always trying to find ways to make them happy and keep them occupied. We recently brought some catnip home, thinking that this would be a great way for them (and us) to have fun. One of the cats goes crazy for the stuff, while the other seems completely unimpressed. Is this normal?

A. I understand your curiosity about the variation in response to catnip that you are seeing with your boys. I personally love it and have always wondered why some (albeit few) of my feline friends can just stand there watching while I roll around like a lunatic in the stuff. It turns out, though, that not all cats respond to catnip by doing the funky chicken. While the mechanism of this variable response is not completely clear, we do know a few things about this interesting plant.

Nepeta cataria, commonly known as catnip or catmint, is a perennial plant that resembles mint. The active ingredient that makes us kitties (well, some of us kitties) crazy is called nepetalactone, and when the plant is crushed or bruised, this volatile oil is released. Interestingly, the chemical structure of nepetalactone resembles some of the sedative components found in valerian root as well as some of the pheromones in tomcat urine, which produces similar behavioral effects to those seen with exposure to catnip in many cats.
When domestic cats (and some wild feline species) inhale nepetalactone, it binds to olfactory (scent) receptors and activates pathways in the brain that remove inhibitions, much in the same way that some hallucinogenics do in people. This behavioral disinhibition promotes the behaviors that are commonly observed in cats that respond to catnip: rolling, purring, leaping around, drooling, and in some cases, aggressive behaviors like growling or hissing.

Interestingly, the response to catnip is hereditary, probably because expression of the olfactory receptors that are involved in the response to catnip is genetically mediated. This means that some cats inherit these receptors and some cats do not. Those cats who inherit these receptors (approximately two-thirds of cats) will respond to catnip in the characteristic disinhibited fashion, while those that don’t do not respond to it. It seems that you have one of each. While there is certainly no tragedy in not inheriting these nepetalactone receptors, I feel badly for kitties that do not!!☺

Another interesting and potentially useful property of catnip that many people are not aware of is that it is an excellent insect repellent, repelling a wide variety of insects, including mosquitoes, cockroaches, aphids and termites. My owners are very excited about these properties as alternatives to chemical insect repellents. I think this is great … more for me roll around in!!

Anyway, I hope this is helpful in explaining the variable response that you are seeing with your kitties, and while it’s too bad that they don’t both respond, at least the one who does can make a really funny show for everyone else in the house!

If you have the time, please send me a picture of your responder during one of his catnip sessions … they are always hysterical. ❖ —Best regards, Elizabeth