An angry cat can do a lot of damage quickly. It can happen so fast that you may not even realize what made him angry. “Cats may attack their owners for various reasons, including fear, irritability, pain, or to solicit play or attention,” says Pamela J. Perry, DVM, PhD, behavior resident at Cornell University’s College of Veterinary Medicine.

To resolve the situation, think about what was happening just before his reaction. If you were touching a particular part of his body, he might be injured there. If he was cornered, or your dog was close by, he may have felt trapped.

“Some cats also redirect their aggression from their intended target to the owner,” says Dr. Perry. If your cat sees another cat outside, he may want to defend his territory. When he can’t access the outdoor cat, he may become frustrated and take out his aggression on the first being that crosses his path, which might be you. 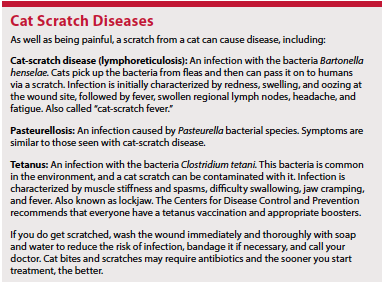 “Young cats and kittens can be very rambunctious and aggressive during play,” says Dr. Perry. “They may bite and scratch, treating people as they would another feline or prey.” There are some classic scenarios during which play biting can occur. The first is a cat launching a sneak attack as you walk by his hiding spot. The second is biting at your hands while you play with him (to prevent this, avoid “wrestling” with your cat with your hands, as it encourages him to nip). The third is when a cat pounces on you as you are sitting quietly, which might be a (very rude) demand for play and attention.

You can also look at your cat’s body language and the damage inflicted from the bite for clues. “When the cat becomes too aroused or aggressive, his tail may start to lash from side to side and his ears may turn back,” says Dr. Perry. “These cats can bite with more intensity, causing serious injuries to their owners.” In contrast, play bites are usually lighter, not breaking the skin.

“It is important that cats learn that it is unacceptable to bite or scratch their owners,” says Dr. Perry. Even little play bites should be discouraged, as they can escalate over time. “If the cat bites while playing, the owner should immediately stop the play session and withdraw all attention.” Once your cat is calm, you can begin playing again.

“If the cat is biting because of fear, irritability, or pain, the underlying issue needs to be addressed appropriately by a veterinary behaviorist,” she says. Pain issues may be diagnosed by your veterinarian and treated. Behavioral issues are often addressed with a combination of behavioral modification and medications to help keep the cat calm.

Feline attacks or overly aggressive playing don’t occur for no reason. The only way to effectively stop it is to find out why it’s occuring and address those issues. Watching for what triggers the overly aggressive play is the first step. If addressing that doesn’t work, discuss options with your veterinarian.