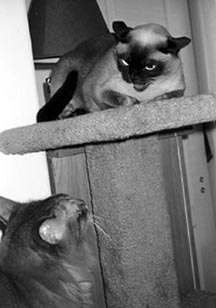 Talk to any two humans living under the same roof, and they will tell you that they occasionally squabble. Talk to any multi-cat owner, and they will tell you their cats have occasional disagreements, as well. The behavior may include hissing, spitting, swatting or chasing; and the disagreements may erupt during mealtimes, when two cats want the same comfortable chair, or even as part of play. If cats occasionally hiss and swat and dont cause injury, or if they take turns doing the chasing, its fine, says Ellen Lindell, VMD, board certified in behavior by the American College of Veterinary Behaviorists. But if one cat is playing and the other is not, its not play anymore.

When Play Turns Serious
Play aggression is not a cause for alarm – but if petty tiffs escalate into major altercations, the resulting skirmishes can become serious. Cat-to-cat aggression is one of the major behavior problems experienced by cat owners.  Its causes may include competing for females among sexually intact male cats, or the introduction of a newcomer, or incorrectly introducing the newcomer to the resident cat.

It can also be a case of redirected aggression caused by arousal from an external stimulus such as an unneutered cat outdoors that the indoor cat may see from a window, or competing for territory or dominance.  With cats indoors, aggression is usually related to status as opposed to territory or fear-based aggression where one cat is being defensive, says Dr. Lindell.

Too many cats in too small of a space may also result in fur flying, but how many is too many depends on the owner and the cats. People may have 20 cats without any fighting, says Dr. Lindell. Theres no magic number. Its really a [feline] personality issue. Some spats are okay, but head-to-head fighting should not be tolerated. Howling, yowling, flattened ears, dilated pupils, raised hackles, arched back and puffy hair are indications that a knock-down-drag-out battle is on the horizon, so you need to intervene – without using your hands – before they get to that stage. Watch for subtle things like a retreating cat or one cat threatening the other, says Dr. Lindell. Staring at each other with a twitching tail is a warning sign.

Cat-to-cat aggression may result in more than just a few clumps of hair on the carpet. If cats have unresolved issues with one another, they may injure each other, spray your house to mark territory, become lethargic, hide, refuse to eat and subsequently lose weight, experience stress and fear, and even become sick.

Aggression can lead to litter box problems or cats not being able to get to their food, says Dr. Lindell.

As Always, Prevention is Best
When it comes to aggression, the old adage, An ounce of prevention is worth a pound of cure, certainly applies. You can create an environment that promotes harmony among the resident cats rather than one in which the cats have to compete for resources. Give cats choices, says Dr. Lindell. Provide more than one litter box in more than one location, and let the cats decide for themselves which to use.

Providing a food dish for each cat or feeding stations at multiple locations can help reduce competition for food. Multi-level cat trees or shelves make use of vertical space within the home and give cats optional places to hang out. The more opportunity for cats to have their own spots, the better, says Dr. Lindell. If cats have their own stations, they can work out the time and space sharing for themselves.

Its impossible to know for certain whether a resident cat will like a companion. Often, a pet caregiver may project feelings onto a cat if he or she feels guilty for leaving the cat alone for blocks of time, but the cat may actually be perfectly content. In other cases, cats may enjoy the company of other cats. More and more people believe cats are better with a buddy, but its very individual, says Dr. Lindell. Ive seen many cats who are attached to their owner but have bonded with another cat, and cats who have bonded with one cat but not the other.

Consider Your Cat When Adding Another
If you want to add a cat to your household, do it because its something you want, but make it pleasant for your resident cat(s). Choose a new cat carefully by finding out as much about him as possible, and preferably from a multi-cat situation, says Dr. Lindell. In terms of inter-cat aggression, there is no statistical difference in gender, according to Dr. Lindell. Age may be a factor, but it depends on the cats. Kittens have a better chance of accepting adult cats, but not necessarily the reverse. Some adult cats are not comfortable with very playful kittens, says Dr. Lindell. Serious aggression is often not exhibited until cats mature socially at the age of two or three.

When selecting a new cat, look for signs of fear. If a cat is fearful, it may have a hard time adjusting, and may overreact to a small threat, says Dr. Lindell.

Adopting a sexually altered cat is more likely to ensure success than bringing home one that is still intact. If you bring home a new kitten, have it spayed or neutered as soon as possible to prevent sexually related aggression. Whenever a new cat is introduced to a resident cat, proper introductions will play a major role in how well the cats get along.

If Fights Erupt, Get Involved
If your cats begin to fight, interrupt the melee. Make a startling sound like shaking a jar of pennies, snapping your fingers, or clapping your hands, says Dr. Lindell. If that doesnt work, blast them with a stream of water. Once they stop fighting, separate them and reintroduce them gradually, even if they have lived together for some time. Never try to separate fighting felines with your hands. It could result in injury to your hands, face or other parts of your body. Have a heavy-duty water gun or a blanket to throw over them, says Dr. Lindell. Make sure they are settled before putting them together again.

If you arent able to keep the cats or people in the household safe or free from injury, separate them permanently. You dont have to give up a cat, says Dr. Lindell, but do time sharing. One gets the bedroom at one point, while the other is in the den. There are always ways to work through the aggression.

Anti-Anxiety Drugs: Can They Help?
If behavior or environmental modification alone doesnt work, discuss drug therapy with a veterinarian. Anti-anxiety drugs including anti-depressants will lower arousal level, says Dr. Lindell. Some cats are explosive and an anti-anxiety drug will help with impulsive aggression. Its important to work through environmental factors, though.