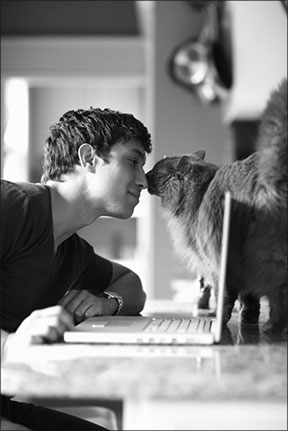 At some point in a bid for your attention, your cat may silently hover over your desk so close to your computer keyboard that your elbow bumps him. He may nearly trip you with figure-eight moves between your legs as you head for the kitchen. He may indulge in a marathon of loud meows at the foot of your bed two hours before your alarm clock is set to ring.

If you’re among the unfortunate, he may perform all of above — and more — as he clearly crosses the line of good manners. “When it comes to the most frequent complaints of owners about their cats, demanding attention ranks third behind periuria (urinating outside the litter box) and aggression toward another cat in the household,” says behaviorist Katherine A. Houpt, VMD, Ph.D., professor emeritus at the Cornell University College of Veterinary Medicine.

Cats may be just a whisper less annoying — or their antics a bit more tolerated — than their canine counterparts. Some dogs and cats have honed their skills at being stubborn, persistent and clingy. “I think dogs are far more demanding than cats,” says Dr. Houpt. “The size of a dog’s paw is generally bigger than a cat’s, and a dog can bark at you at higher decibels than a cat’s meow. But both can be demanding.”

The best way to deal with incessant meowing: Don’t engage your cat in chatty conversations. “The secret is to never answer the cat when he meows,” Dr. Houpt says. “Don’t answer a meow with, ‘What do you want?’ You should initiate the conversation with your cat — not respond to meow questions. Continue to ignore him even if he keeps at it.”

The other prevalent ways cats seek attention from their owners include:
– Looming close at all times.
– Standing on the keyboard or standing between the computer monitor and keyboard.
– Rubbing against your legs when you move.
– Sitting on the newspaper, work papers or book you’re trying to read.
– Leaping up on your lap when you sit down.
– Pacing back and forth and vocalizing at you.
– Nipping your hand or forearm.

To avoid surrendering to your cat’s demands, look for clues behind the behavior. Cats crave daily routines, and some may vocalize when you’re an hour late in serving their meal or become put off because you forgot to scoop their litter box. You cat’s clock is also set to be more active at dawn and at dusk. That’s why he may disturb your sleep before your alarm goes off.

Genetics may play a role. The Siamese has a reputation for being vocal and bossy. Other purebreds, such as the Sphynx, can be clingy, wanting to be with you every minute. It may be simply that they need to be kept warm — the breed lacks a haircoat.

Prey and Predator. In some cats, the need to feel safe from predators kicks in, Dr. Houpt says. “Cats are both prey and predator. Even though they have been domesticated, that fear is still hardwired into them. Some cats may feel vulnerable with their heads down in the food dish. They can’t take their bowl of kibble to a safe hiding place as they could with a dead mouse. They want their people around them for protection at meal time.”
Medical conditions can also trigger a cat’s sudden insistent or bossy behavior. If your otherwise-mellow middle-aged or senior cat suddenly starts long meow sessions or acts hungry even after eating a meal, play it safe and have him examined by his veterinarian.

Your cat could have hyperthyroidism. The common glandular disorder causes the thyroid gland to produce excessive amounts of the hormone thyroxine, resulting in increased appetite, sudden weight loss and hyperactivity. Or your cat may be yowling in pain because of an injury or abscess. Any sudden change in behavior warrants an immediate trip to the veterinarian, Dr. Houpt says.

While cats may not heed training cues as easily as dogs, Dr. Houpt offers these steps to tamp down demanding behavior:

Don’t regard your cat as a small dog. Dogs, in general, respond appropriately when ushered into a closed room for a time-out when they’re annoying you or your houseguests. “Time-out does not work well for cats,” Dr. Houpt says. “It does not take much energy to meow, and some cats can meow for a long time. Make the closed room pleasant. Provide a soft place to nap, water, and if the cat is not obese, food. Clip his nails so he won’t damage the door frame by scratching.”

Engage your cat in five- to 10-minute play sessions morning and night to give him physical and mental outlets for his energy. Have him stalk and pursue a feather wand toy or chase a laser pointer’s moving beam. Or crinkle paper wads and toss them down a hallway or up and down a stair for your cat to hunt.
Provide company during meal time. As mentioned, some cats feel vulnerable lowering their heads into bowls to eat.

Postpone the evening meal. “There is no reason that a cat’s second meal of the day has to be at 5 p.m. It could be at 9 p.m. right at bedtime,” says Dr. Houpt. “Or consider putting a food bowl on a timer in your bedroom so you get a good night’s sleep.”

Practice the art of compromise. Put a cozy cat bed on your desk to stop your cat from standing between you and the computer monitor.

In her home, Dr. Houpt has compromised with a newly rescued cat, Hadley, who tended to shadow her to every room. Since Dr. Houpt is often busy in the kitchen, she relocated Hadley’s towering cat tree there. The result is a contented, quiet Hadley taking in every move from her high perch.

As your cat’s demands fade, Dr. Houpt says, “You can be happy he enjoys your company and wants to be with you.” ❖