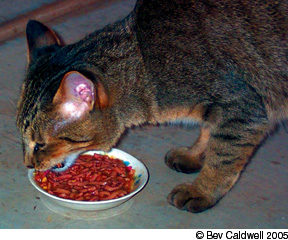 Despite your cats normally docile and compliant temperament, there are bound to be some things in this world that she finds intolerable – and the food shes been eating may be among them. Perhaps she doesnt like its taste or texture. Or, worse, maybe shes allergic to it. If thats the case, the signs are likely to be very clear: The animal will be tormented by constant and insufferable itching, which will become obvious as you witness her nonstop scratching.

Food allergies are not uncommon in the cat population, says Ilona Rodan, DVM, director of the Cat Care Clinic in Madison, Wisconsin. In fact, they can be the most frequently seen feline allergy in some areas of the country, depending on the environment and season of the year. Studies have shown that food allergies are the third most common type of feline allergy, outranked in frequency only by allergies to flea bites and inhaled substances. It has been estimated that food is responsible for about 10 percent of all feline allergies.

You can also observe intestinal signs of a food allergy, says Dr. Rodan, such as vomiting and diarrhea. And in some cases, the animal may suddenly stop eating its food, even if it is the same food that it has been eating for years. But the most commonly seen signs are related to the skin – usually around the ears, eyes and neck – which will be inflamed and covered with little sores.

Potential Hazards
As irritating as they are, the itchy welts on an allergic cats skin do not, in themselves, pose a serious health hazard. But the incessant scratching that they prompt may cause secondary skin wounds and a resulting vulnerability to severe bacterial infection. In addition, the gastrointestinal problems stemming from a food allergy may have far-reaching systemic implications. And unless a food allergy is treated promptly, an animals avoidance of its food may result in health-compromising weight loss.

The most visible signs of a food allergy – the persistent scratching, the emergence of skin lesions, hair loss and a general deterioration of the coat – do not develop overnight. Instead, they tend to show up gradually and intensify over an extended period of time as a cats immune system gradually mounts a defense against certain protein and carbohydrate molecules that are present in most standard cat foods.

Prompt Attention
To combat these chemicals, which are perceived as dangerous invaders, the immune system generates antibodies – cells that are dispatched to destroy the offending allergen. In time, the antibodies precipitate the leakage of fluid from the blood into the tissue beneath the skin. The fluid eventually collects to form skin eruptions and inflammation – and thats when the telltale itching and scratching begin.

Since the proliferation of antibodies is a gradual process, it is not unusual for a cat to start exhibiting signs of an allergy to food that it has been consuming enthusiastically and without incident for months or even years. When the signs do appear, a cat should receive prompt veterinary care. And if a food allergy is indeed diagnosed, the specific allergen should be identified and removed from the animals diet, since the condition could conceivably be life-threatening as the result of, for example, infection and ongoing nutritional malabsorption. In any case, Dr. Rodan points out, A cat with a food allergy will, at the very least, continue to be terribly uncomfortable if the problem is not addressed as soon as possible.

Initial Treatment
The first step in treating a cat with a suspected food allergy, Dr. Rodan notes, is to make the animal comfortable. Well clean the cat up, she says, and well treat any apparent secondary infections with antibiotics. And we may try to stop the itching with steroids.

An attempt will then be made to rule out other frequent causes of the skin eruptions and other signs. These include, for example, a hypersensitive reaction to a medication or to an inhalant, such as pollen or mold spores; to a plant, such as poison ivy or poison oak; or to flea bites. The veterinarian will also try to rule out a possible metabolic cause, such as gastric intolerance of a specific substance – lactose, for example, or a food contaminant.

If a food allergy is identified as the probable cause of the symptoms, says Dr. Rodan, Well send the cat home with antibiotics to treat the infection and, possibly, with a short dose of steroids. And to make sure the animal doesnt continue to destroy its skin, we may recommend plastic caps to cover its nails.

Identifying the Allergen
The next challenge is to identify what precisely in the cats diet is responsible for the problem. And this, Dr. Rodan says, is always done at home by the owners introduction of what she calls a novel diet (also termed a hypoallergenic or elimination diet).

The principle used in devising a novel diet is based on the fact that most feline food allergies are traceable to the protein or carbohydrate content of an affected animals normal fare. These substances are present in the form of large molecules that can bind readily with an immune system cell to produce an allergic reaction.

The most commonly used protein and carbohydrate sources in cat food include beef, pork, lamb, chicken, turkey and eggs. Since protein is a fundamental component of living cells and is necessary for the proper functioning of an organism, the novel diet must contain protein – but it must be derived from a source to which an affected cat has not been previously exposed. The same goes for carbohydrates, so the vegetables that are frequently used in cat foods – wheat, barley and corn, for instance-should also be excluded from the novel diet.

To perform a conclusive search for the offending allergen, a cat must consume nothing but the novel diet and water for a period of at least eight to 10 weeks. (This includes abstaining from treats of any kind, Dr. Rodan notes.)

Novel Ingredients
Most veterinarians will be able to recommend a specific diet that is nutritionally sound and contains none of the conventionally used protein or carbohydrate sources. Many readily available novel diets have been formulated using such unusual protein sources as rabbit, venison, fish and even kangaroo meat, as well as an uncommon carbohydrate source, such as tofu. In addition, some diets use proteins from the traditional meat sources that have been broken down into molecules that are too small to stimulate the immune system.

In all likelihood, a cats allergic signs will gradually disappear while it is on the novel diet. In that case, you can assume that the allergen was a component of the previous diet. Consequently, that allergen must be eliminated from the animals food in the future.

Confirming Results
To enable the identification of a specific allergen, the owner can subsequently reintroduce components of the cats original diet one by one and watch carefully for the reemergence of allergic symptoms. If the symptoms recur, they will probably do so within a week or two, in which case you will have confirmed at least one source of the allergy.

Following this successful test, you can return to the novel diet until the itching stops and repeat the test using another protein or carbohydrate source. If the signs of allergy do not recur, it is very likely that the animal is not allergic to the recently added diet ingredient.

Through repeated systematic testing, it may be possible for you to pinpoint all dietary ingredients to which your cat is allergic. Therapy, it follows, requires the vigilant exclusion of these ingredients – the goal being, of course, to permanently prevent a recurrence of the animals food allergy signs.