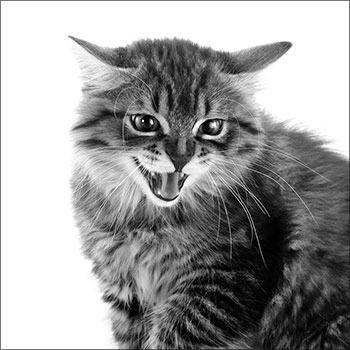 Chibi was a therapy cat, placid and friendly. She visited senior homes and was sociable around dogs, other cats, even doves and a guinea pig. Imagine her owner’s surprise when she saw a large red warning banner on Chibi’s chart at the veterinary clinic.

Daleen Comer of Mission Viejo, Calif., was stunned to learn that the technicians considered her otherwise mellow cat dangerous. She clawed and hissed, especially when they had to draw blood. “For vets or vet techs, she was an extremely scary cat,” Comer says. “After that, I always made sure I trimmed her nails before vet visits.”

Defensive Reaction. Aggression is the most common feline behavior issue animal behaviorists see after litter box problems, according to the ASPCA. Aggressive cats may threaten or injure people, other cats and dogs. Ilana Reisner, DVM, Ph.D., of Media, Penn., describes it to her clients as self-defense. Dr. Reisner, who completed her residency at the Cornell University College of Veterinary Medicine, is one of only 52 members certified by the American College of Veterinary Behaviorists in the U.S.

“Most aggression in cats and dogs is defensive,” she says. “Cats display ‘emotional’ responses in the form of attempts to escape, hissing, dilated pupils, biting and swatting. If they are closely threatened or startled, we may see piloerection—arched back and hair standing on end like the classic Halloween cat.”

Car rides and veterinary visits frequently trigger fear aggression. Diane Claridge of Lake Forest, Calif., remembers the challenge of taking her cat, Morton, to the veterinarian. He had never been in a car, and she didn’t own a carrier.

“He was a little sweetheart — until the car started moving down the street. Morton instantly resembled the Tasmanian devil. He climbed up on my shoulders and started howling. When I got to the vet’s office, there was a man in line with a German Shepherd. I was trying to hold Morton close to comfort him, but he just wanted out of there. I still have a scar from the scratch he left on my chest.”

Fear aggression can have numerous causes. Some cats fear the presence of strangers in the home. Others are often fearful in stressful environments, such as animal shelters or boarding kennels. Some cats can be afraid of sounds, especially high-pitched or unusual sounds resembling fight-related vocalizations of other cats. Dr. Reisner says. Hearing such sounds can cause cats to turn on whoever’s closest. Pain from an unrecognized medical condition can also cause them to lash out.

Household Fights. “Any fearful animal will try to get away first and will be worse if there’s no escape,” Dr. Reisner says. “Fear-related aggression can be proactive and appear offensive. When household cats fight with each other, the fearful cat will typically be the more explosive and

It’s easy to recognize a fearful cat through body language. His pupils enlarge, letting in more light and giving him greater peripheral vision as he prepares to defend himself. More aggressive signals include growling
and scratching.

“Cats commonly redirect that aggression to people or the nearest cat,” Dr. Reisner says. “Unfortunately, that person or cat can then be seen as a conditioned stimulus for the fear long after the original trigger or noise
has disappeared.”

If your cat is in full aggressive display, the safest strategy is to back off. Claws and teeth can do serious damage. Don’t try to soothe or speak to your cat; simply walk away and give him some space until he can relax. The last thing you want is for him to feel cornered or trapped.

Try a Time-out. You absolutely don’t want to punish him. That will only increase his fear and aggression. If you have to move the cat, use an object such as a blanket or pillow — never your arms or legs. Gently guide him into a separate room and shut the door so that he has time to calm down.

Of course, your cat is going to have to go to the veterinarian or experience strangers in the home at some point. Sometimes you can manage his fear by desensitizing him to its source, taking steps to help him feel more comfortable in stressful situations and, when possible, avoiding those that frighten him.

For example, if your cat is fearful when strangers visit, gradually expose him to visitors at what he considers a safe distance. When he sees them far away, reward him with treats. If he’s too frightened, allow him to leave the area and hide if he chooses to do so; it’s important to give cats the opportunity to feel safe.

Food or toy rewards can counter-condition the cat’s fear so that he associates the visitor with good things.

Continue rewarding the cat with favorite treats as long as he chooses to be present. When this desensitization is done over a period of time — and it will likely require multiple practice sessions — your cat will eventually learn to associate guests with his favorite salmon snacks and may even begin to welcome them. Then guests should ignore your cat but toss treats or a favorite soft toy in his direction. He learns that the person’s presence is an opportunity for high-value food.

His Own Safe Room. An alternative is to avoid the situation by providing your cat with a safe room that contains everything he needs for comfort: food, water, toys, resting and climbing spots, and a litter box. Let him stay there when you have guests. There’s no point in aggravating him if you don’t have to.

Veterinary visits and car rides call for more patience and tactics. Teaching your cat to love his carrier is the first step for both. Marty Becker, DVM, who advises veterinary practices on fear-free visits for pets, recommends leaving the carrier out all the time so the cat becomes used to its presence and priming it with food, treats and toys. This helps the cat form positive associations with the carrier so he’s not reluctant to ride in it. A carrier with openings on two ends is most attractive because the cat won’t feel trapped and might enter more easily.

An hour before any car ride or visit to the veterinarian, release cat-relaxing pheromones – available in sprays and wipes at pet stores — in the room where the cat spends the most time and apply them to the interior or bedding of the carrier. At the clinic, check in while your cat waits in the car until you can take him directly into the exam room (be careful not to leave him in the car unattended in overly hot or cold climates for any length of time). If possible, instead of letting it hang at your side, hold the carrier as if it contains a valuable and delicate object — which, of course, it does.

Stress-free Travel. Practice car rides long before your cat needs to travel. Start by placing him in the carrier in the car and closing the door. It’s best if the carrier is on a flat surface so the cat is comfortable. Sit in the car for a few minutes, and then take him back indoors. After doing this a few times, move on to starting the engine and then to backing down the driveway and back in. Eventually, go around the block or take him to the drive-through to pick up some burgers or a breakfast sandwich.

Rewarding him with a bite of beef or egg can go a long way toward enhancing his appreciation of car rides. Also, take him to the veterinarian for practice visits that involve only petting and treats from the staff, nothing scary or painful.

Socialization is important in preventing fear aggression, Dr. Reisner says, but the sensitive period for socialization is largely over by the time kittens are adopted at 7 to 8 weeks of age, and it’s not always possible to influence their early experiences. If you have a choice, pick a kitten or cat who isn’t fearful when approached or handled by people. And if your cat has injured you or others through his aggression, consult a veterinary behaviorist for expert help.

Back Off From These Telltale Signs
It’s essential to recognize fearfulness in your cat before he becomes aggressive, says veterinary behaviorist Ilana Reisner, DVM, Ph.D. “Watch the cat’s body language carefully.” Here’s what to look for to avoid an encounter with his claws or teeth. When you see these signs, it is best to walk away and, if possible, shut a door to securely separate the cat until he calms down. In the unlikely situation that the cat lunges toward you, use a blanket or pillow to protect yourself as you back away.

A cat in a defensive mode who may be ready to attack will:
– Crouch
– Roll onto his back
– Tuck his head in
– Curl the tail around his body
– Flatten his ears
– Turn sideways to the threat
– Dilate his pupils