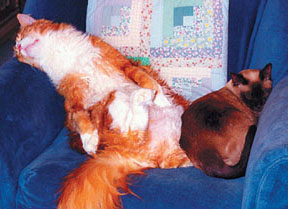 Your cat is a bundle of energy – when shes awake, that is. Youre concerned, though, because the little creature seems to be spending the better part of her life asleep. In fact, just about every time you look at her, shes dozing off.

Most likely, according to veterinary experts, you have nothing to worry about. All felines – from lions, tigers and leopards to the common house cat – naturally sleep a lot. Its perfectly normal. Indeed, some cats will spend 16 hours per day slumbering – and sometimes as much as 18 hours in hot weather. The typical house cat, says Katherine Houpt, VMD, PhD, spends 40 percent of its life – about 10 hours per day – asleep.

Its a Hereditary Trait
Why do cats sleep so much during the day? One theory is that they are genetically programmed to do so. Todays domestic cat has evolved from wild felines that conserved their energy by sleeping in broad daylight so that they would be well-rested to hunt for prey at dawn and dusk. As crepuscular animals, their eyesight is especially keen in dim light – perfect for stalking victims that are not similarly equipped.

According to Dr. Houpt, director of the Animal Behavior Clinic at Cornell Universitys College of Veterinary Medicine, Cats usually have two major sleep periods – or epochs – during the night. How soundly they sleep depends on several factors, such as their age and the way they are fed. And during the day, theyll take several comparatively brief catnaps, alternating periods of light sleep and wakefulness.

Types of Sleep
Periods of deep sleep typically last for only ten minutes or so. During these periods, the animal tends to lie flat or peacefully curled up. Its body is relaxed – although it may twitch now and then – and its paws, legs and facial muscles may move. Deep sleep is also characterized by rapid eye movement (REM). These manifestations may suggest that the animal is acting out during a dream – perhaps chasing a mouse or fleeing from a predator. (Experts believe that cats dream, but what they dream about remains a mystery.)

Periods of light sleep are longer, lasting up to a half-hour or so. During light sleep, the cats body is comparatively unrelaxed, and the animal appears ready at any moment to awaken and spring into action. Frequently, says Dr. Houpt, a cat will assume a sphinx position during light sleep, its paws tucked beneath its chest and its head erect and facing forward, as if the animal has prepared itself to move into action quickly if it senses the approach of something potentially dangerous.

Possible Variations
Sleeping patterns differ from cat to cat. For example, Dr. Houpt points out, indoor cats probably sleep more than outdoor cats because they are less active. Theres nothing much for them to do, she says, and they dont have to hunt for food – it just appears.

Fat cats tend to sleep more than slim ones, she notes. Conversely, she adds, if you put a fat cat on a diet, dont be surprised if it gets up earlier in the morning.

Newborn kittens sleep more than mature cats do; in fact, until the age of three months, when the adult sleeping pattern is pretty well established, kittens are asleep most hours of the day and night – a habit that keeps them in their nests, tucked safely away from predators.

Worrisome Changes
Once established, the sleeping patterns of most cats will remain quite constant throughout life. Therefore, any sudden or dramatic change in sleep habits may signal the presence of a serious health problem. For example, an older cat that is sleeping noticeably less than usual – and is much more active when awake – could be experiencing a glandular condition called hyperthyroidism. Researchers have also identified sleep reduction as a possible sign of infection with feline immunodeficiency virus (FIV).

As for cats who abruptly begin to sleep more than usual, some veterinary scientists believe that they may be exhibiting signs of a cognitive disorder similar to Alzheimers disease in humans. Excessive sleep, says Dr. Houpt, has also been linked to kidney disease, cancer and any number of other illnesses.

In addition, says Dr. Houpt, a cat that begins to sleep in a different position than it normally assumes may be attempting to cope with a bothersome condition. Any dramatic change in a cats sleeping behavior, she advises, warrants examination by a veterinarian.