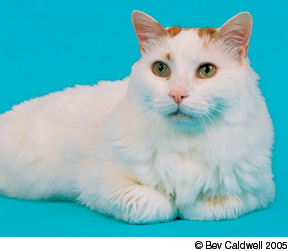 Susan Smith, a secretary in New York, almost didnt notice that her two-year-old tabby, Herman, was losing weight. But one evening, while petting him, she could feel the sharp protrusions of his vertebrae through his skin. She thought shed ask the veterinarian about it at the next scheduled checkup. But the next day, Herman was vomiting. This called for an immediate trip to the veterinarian.

The visit showed that he was suffering from a chronic infection, and the weight loss was indeed the sign that something was wrong.

Signs such as weight loss, behavioral changes, a suddenly unkempt appearance and even a refusal to eat may be indicators that something isnt right with your cat. Unfortunately, in many cases those signs are so subtle – or so close to normal feline behavior – that many cat owners miss them.

A Pound Too Much
By the time Herman visited the veterinarian, the normally 12-pounder was down to 11 pounds. A pound may not sound like a lot of weight to us, but according to James Richards, DVM, director of the Cornell Feline Health Center, a one pound loss in a cat is a cause for concern.

Weight loss may be just a normal part of aging, but it could also signify serious, chronic illness such as kidney failure, hyperthyroidism, infection with the feline leukemia virus (FeLV) or feline immunodeficiency virus (FIV), cancers or other diseases.

While weight loss in a cat is often an insidious process, you can take steps so that you will notice it as early as possible. Follow your cats weight. Get on the scale with him in your arms (if hell let you). A baby scale is even better, as it will more accurately detect subtle changes in weight that may be missed by using a bathroom scale. Rub your cats back and sides frequently, if hell tolerate it, so youre familiar with the feel of his ribs and backbone through his skin and coat.

Since its sometimes difficult to tell by looking at a long-haired cat if its losing weight, comb his fur regularly. That way, you will be more likely to notice if his backbone becomes more apparent under his skin. Notify your veterinarian at once if there are any obvious changes.

If you notice that your feline napper is now trying to break sleep records, that too may be a sign of illness. Because a cat is usually awake for barely six hours a day – and you may not be home all day to observe him – if you notice your cat sleeping more than usual, take him to the veterinarian. Again, this may be just be a sign of old age, but it could also indicate an infection or other physical problem.

Conversely, if you notice that Kitty appears wired, not sleeping as much and much more active than usual, consider a veterinary visit. This could be a sign of hyperthyroidism, a common illness in older cats.

Eating and Drinking Habits
It may not be unusual for Kitty to turn his nose up at his bowl of cat food on occasion. But if he appears to be doing this more frequently, or does not appear to be eating at all, you may have a sick cat on your hands. No eating can also signify tooth or gum disease, which makes eating painful; a decrease in the sense of smell, which is not uncommon in older cats; or even arthritis, which makes it difficult or painful for the cat to walk to his food bowl. Loss of appetite may indicate more serious illnesses, as well, so a visit to the veterinarian is in order.

Although his water bowl is always available to him, Kitty may not often be seen drinking from it. Canned food provides a large proportion of the water that cats need. But if you notice a sudden change in your cats fluid intake, this may indicate that the cat is diabetic, has hyperthyroidism or is suffering from chronic renal failure, among other diseases. A loss of thirst is of equal concern.

Other Changes
If your cat has always been perfectly groomed, and she suddenly appears matted and dirty, there may be a physiological cause – including painful skin lesions or tumors. Or if Kitty seems to be scratching a lot, it may be from infestation with fleas, mites or fungi, or even result from an allergic response to fleabites or to environmental factors.

Sometimes there will be a subtle behavioral change. Kitty begins urinating on upholstery or carpets and not always in the litter box. You may mark it off as to a change of season, the addition of a new cat or baby to the household, or even a change in your decorating scheme. But such inappropriate urination could also signify that Kitty has a urinary tract disorder. Have him checked out by his veterinarian immediately.

Sometimes a cat will leave feces in places other than the litter box. This may indicate a problem affecting the large intestine. It can also be that the cleanliness of the box is not up to his standards, so make sure to scoop daily and clean regularly.

If you ever see your cat straining in the litter box, this is a sign of a problem that requires immediate attention. Dont delay. 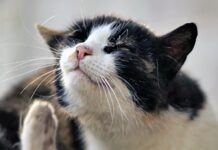 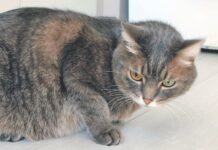