While jokes abound about how cats just utilize humans as their slave caregivers, cats do care about and get attached to their owners. They just don’t turn themselves inside out fawning all over them and licking their face like some dogs do. So how can you read your kitty’s more subtle signs of affection?

“Cats can show affection in many ways,” says Pamela J. Perry, DVM, PhD, Behavior Resident at Cornell University’s College of Veterinary Medicine. “One of the most common ways a cat shows affection is through purring, which indicates contentment. However, some cats purr when they are ill or in pain, so the context of this behavior should be taken into consideration.” If your cat is hunched in a hiding place or has her eyes wide with fear and her whiskers pulled tight, she is probably stress purring. But if she’s snuggled up in your lap or strutting up to the door when you get home, she’s one happy kitty.

“Other signs of affection include head bunting or cheek rubbing, which transfers pheromones from the cat’s cheek glands to you,” says Dr. Perry. “My favorite sign of affection is the slow blink. I often can get one of my kitties to demonstrate this behavior if I slow blink at her first. Other kitties express affection by grooming their owners, a type of allogrooming that cats display towards preferred feline associates.”

While cats do often show some of these behaviors when you are dishing out the cat food (after all, who doesn’t like dinner?), they will also show them during other points in the day, such as when you are both lounging on the couch or when you return home after running an errand. Your cat may also rub against your clothes or other items that smell like you.

If you just got your cat, it may take some time before she forms a bond with you and starts showing signs of affection. Relationships take work! Bring her her meals and treats (in moderation of course) and make sure she has places to hide where she feels secure. Provide opportunities for interactive play, such as with a wand toy, each day. As she settles in and gets used to you, initiate physical interaction such as petting. You can use treats to help gain her trust—gradually require her to come closer and closer to you to get the treat, working up to walking under one hand to get the treat from the other hand. Calm persistence will win her over.

Some feline indications of affection can be easily misunderstood. “Some cats solicit attention and affection through so-called ‘love bites,’ ” says Dr. Perry. “When your cat is interacting with you, rubbing and head bunting may be mixed with a very gentle holding bite. Love bites are gentle and brief, intermixed with rubbing or licking, as opposed to harder bites accompanied by tail twitching and dilated pupils (which are a sign of petting-induced aggression).” So if your cat is doing some silly nibbling on your arm, don’t worry, she isn’t evaluating you as her next meal—she’s just saying she loves you!

A 2019 study out of Oregon State University’s Human-Animal Interaction Lab looked at how cats responded when they were left alone in an unfamiliar room for two minutes and then the owner returned. As it turns out, cats show many of the same attachment behaviors that dogs and human babies do. They care when their owners leave and when they return.

A Swedish study published in 2017 looked at how cats behaved while their owners were away and when they returned after two different absence lengths. The cats were left alone for half an hour and then for four hours. The cats did not behave differently during the two absences, but purred and stretched more when the owners returned after being gone for four hours!

These behaviors are signs of affection from your cat: 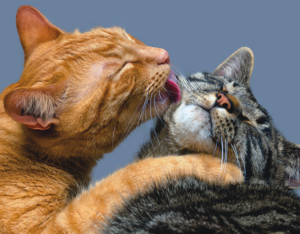 Allogrooming is when two members of the same species groom each other. This activity helps with bonding, forming and maintaining social relationships, and establishing hierarchies. Chimpanzees and Vervet monkeys are the most famous for their intricate mutual grooming, but many other species exhibit this behavior as well, ranging from bees to ravens to horses—and cats of course!