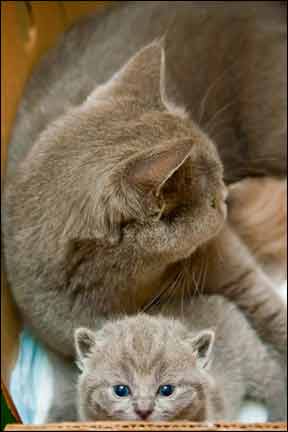 If anyone has learned to accept the empty nest syndrome, its the mother cat who watches her kittens leave one by one by at about 12 weeks or so – either through adoption or by wandering off to fend for themselves. So its interesting to see how mother cats and their kittens behave when they remain together in the same

Sibling Rivalry? “The least amount of conflict occurs with cats that have been brought up together,” says Katherine A. Houpt, VMD, the emeritus James Law Professor of Animal Behavior at Cornell Universitys College of Veterinary Medicine. “Feline siblings often become friends in the household.”

But staying together in a small area, such as inside a home, is not the usual course of events for adolescent cats, explains Dr. Houpt. Friction can occur. There may be skirmishes for social ranking among cats, especially the males. Most of these conflicts involve some threatening posturing, but usually dont result in all-out fights. Eventually, one cat will probably assume an “alpha” position in the hierarchy, while the others become content to sit on a lower rung on the social ladder and maintain the peace.

Mother and Daughters. Adult females are usually less likely than males to fight. In fact, there can be an enduring relationship. Some females in the wild will care for each others kittens, such as when one of the mother cats goes off hunting. A mother cat in the wild may end up adopting small kittens if their own mother doesnt return. So the female bonding that occurs within the household among mother cats and their grown daughters may be similar to the bonding that occurs in the wild between female cats. And this bonding may very well serve as a survival mechanism, further ensuring the protection of the young.

Mother and Sons. It can be a different story with feline mothers and sons. Some females may become aggressive toward a male when he becomes an adolescent. A mother cat may be affectionate to her son one day and turn on him the next, seemingly without any reason. “As a child, I had a male cat that was beaten up by his mother,” says Dr. Houpt, “but this is not very common in free-ranging cats.”

Here is one possible reason for this occasional behavior: “In the normal situation, the male will usually leave the area where hes born when he gets to a certain age,” says Dr. Houpt. So its not natural for males to live for a prolonged period of time with their mothers. In the household, therefore, the mother cats aggression may “signal” that she no longer wants her male kitten around – that its time, in fact, to leave the nest. The problem is that the male may have no place to go if hes kept inside, causing friction between the mother and son.

The Incest Taboo. Will cats from the same litter mate with each other? Unlike humans, cats dont have an incest taboo. Siblings and mothers and sons will mate, as distasteful as that may seem to humans. Again, says Dr. Houpt, “this normally wouldnt happen in the wild because the male usually leaves his mother and siblings and looks elsewhere for a mate. But if hes given no choice, he may try to mate with the cats he grew up with.”

Cats that grow up and stay together in a household with humans do face social dynamics that probably differ from what they would experience in the wild. But if cats could talk, theyd probably concur with humans about family: You can choose your feline friends, but not your relatives.”