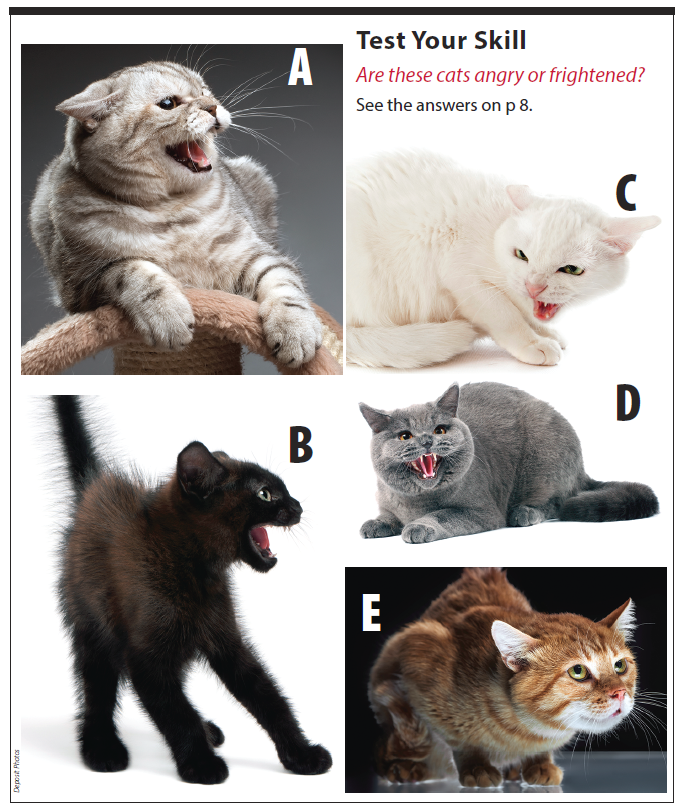 Your cat is tense and clearly unhappy, but you aren’t quite sure what he’s feeling. Here are some tips for decoding his body language.

A cat exhibiting aggression is unhappy with his current situation and willing to resolve it—violently. “An aggressive cat walks with his head slightly lowered and his back legs straightened (on tiptoes) so that the back slants downward from rump to head,” says Dr. Pamela J. Perry, DVM, PhD, behavior resident at the New York State College of Veterinary Medicine at Cornell University. “His pupils may be constricted, and his ears are typically erect but rotated so that the openings are facing toward the back.” His body is tense and oriented toward the perceived threat, often leaning a little forward.

Aggressive cats often growl. Cat growls don’t rumble quite like a dog growl, but rather sound like a low sustained yowl. This is a warning sound telling anyone nearby to back off.

“A frightened cat is usually crouched, has dilated pupils, and with ears flattened to his/her head,” says Dr. Perry. “In addition, a fearful cat’s feet (if the cat is standing) are close together under her body so that it looks like the front feet are retreating while the hind feet are approaching. The ‘Halloween cat’ is also a fearful cat, but one who may become aggressive if the threat does not retreat.” Cats who are scared usually look like they are trying to shrink away from whatever is bothering them, and keep their whiskers and tails close to their bodies. If possible they will try to hide.

Dr. Perry adds, “A frightened cat also may make a lot of noise—hissing and spitting.” While at first it may seem counterintuitive that a frightened cat would make a lot of noise (shouldn’t he be trying to hide?) this is the feline equivalent of bluffing. By making loud noises, the cat is trying to convince whatever is scaring him that he is too tough to take on. He doesn’t really want to fight.

“It is important to wait until the cat is no longer aroused before attempting to interact with him, [or] the owner may be bitten or scratched,” advises Dr. Perry. A fearful cat that is pushed too much may lash out defensively. “Cats take time and patience, especially when they are fearful or aggressive.It is best for everyone to allow the cat enough time to calm down (which may be hours) before engaging in any interaction with him or her. Owners should avoid confronting a fearful and/or aggressive cat or using verbal or physical punishment.” Punishing the cat just exacerbates the situation.

For a cat who is displaying aggression, try to alleviate the situation by walking away/ignoring him or by distracting him. Some possible distractions include tossing a toy or empty plastic bottle near (but not at) him to redirect his focus, or making a loud, strange sound. Never reward an aggressive cat with treats until he is calm and relaxed, and keep your hands away from him to prevent a pounce. The Cornell Feline Health Center has excellent information on the types of feline aggression and some strategies for preventing and resolving aggression: http://bit.ly/felinecenter

“With a fearful cat, the owner should identify what causes the fear and avoid the trigger as much as possible,” says Dr. Perry.”If the cat is fearful of people, for example, allow the cat to retreat to a safe area when someone comes to visit.” Let your cat choose when to approach something/someone new and “scary” rather than forcing an introduction. Speak to him in a calm voice, and avoid staring at him directly or making sudden movements toward him.