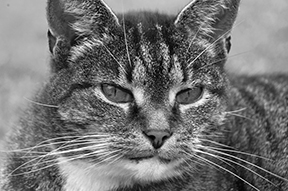 When a kitten or elderly cat shows little interest in food, loses weight, develops a persistent fever and succumbs to an untimely death, too many heartbroken owners are left to wonder: What was the cause of death?

One possible culprit is feline infectious peritonitis (FIP). The often-fatal disease usually goes undiagnosed, says Cornell University virologist Gary Whittaker, Ph.D. “The idea that FIP is a rare disease is not true. It can actually be quite common, and it’s currently the leading infectious cause of death in cats under 2 years of age.” What’s more, there is no simple test for it. The only available vaccine is not generally recommended by the American Association of Feline Practitioners. And there is no known cure or effective treatment.

Promising Research. If Dr. Whittaker and his team researching FIP are successful, however, their promising work could lead to discoveries to make a simple, reliable diagnostic blood test for FIP a reality — perhaps in as soon as five years, with government approval to follow. Ideally, the test will identify a mutation that sets the deadly FIP infection into action.

If that happens, it would bring the possibility of intervention or at least a drug for treatment. “That’s a little long range but definitely a practical application,” says Dr. Whittaker, a professor in the College of Veterinary Medicine’s Department of Microbiology and Immunology.

Andrea N. Johnston, DVM, DACVIM, a Clinical Instructor in Internal Medicine at Cornell, says it’s a misconception that the complex disease can now be diagnosed with a blood test. “It is very challenging to diagnose. A reliable blood test for FIP would allow early detection of the disease, eliminate the need for costly and invasive diagnostics, and potentially improve our ability to treat cats with FIP.”

Uncovering Mysteries. As Dr. Whittaker and his team conduct their painstaking research to uncover the mysteries of FIP, it sounds like a whodunit. Among a host of issues surrounding the disease, one problem is this: While it’s known that feline coronavirus leads to FIP, there are two forms of it — one benign, one deadly — and yet they look exactly alike under a microscope. Veterinarians can test for coronavirus, but even if results are positive, they won’t know the type. A positive result simply means a cat has been exposed to coronavirus, period.

“We’ve had samples from breeders and shelters where 100 percent are positive for feline coronavirus,” Dr. Whittaker says. Such findings turn out to be practically meaningless.

While a 2005 study published in the Journal of Virological Methods stated that coronaviruses “are ubiquitous among cat populations,” only some cats go on to develop the deadly form of the disease.

By some estimates, five to 10 percent of infected cats eventually develop the deadly form because of a virus mutation or aberrant immune response. But FIP often can go undetected. To confirm a diagnosis, veterinarians usually use biopsies and reports from pathologists, who examine tissues under a microscope. That’s after examining the cat for clinical symptoms, which can mimic other diseases.

It Started With SARS. While Cornell has a long history of work on FIP, Dr. Whittaker’s involvement began almost by happenstance. He had been researching the virus that causes the human respiratory disease SARS (severe acute respiratory syndrome) in the wake of the 2003 Hong Kong outbreak that appeared poised to become pandemic. The disease is caused by a coronavirus, specifically the SARS coronavirus. That prompted him to study coronaviruses in general, and he soon became fascinated by the feline coronavirus.

“I’ve been studying viruses for some time, and this is one of the most interesting,” Dr. Whittaker says of feline coronavirus, a precursor to FIP. Actually, FIP isn’t a single virus. “It’s a crazy virus — a cloud of viruses,” he says. And like a cloud in the sky changes, so does FIP in a single cat. No two FIP viruses are alike; there is always variability.

All the viruses appear to have a biological switch, kind of like a light switch that turns the virus on. But a mutation in the viral genome can change the switch and instead turn on FIP in a cat, Dr. Whittaker says. The thing is, though, that “It’s never the same change. Almost every FIP cat has a different switch. It’s a different change every time.” Not only that, even within an individual cat different tissues will have different switches to turn on FIP. “Very intriguing and almost unique,” Dr. Whittaker calls the process. “We’re trying to figure out what’s happening.”

Studying Blood Samples. His team is gathering samples of blood or tissue ­— mainly from deceased cats — from around the country to examine. So far, they’ve found the switch in the virus in the feline gastrointestinal tract. In a healthy cat, six identical amino acids comprise the switch. If you look at the same six amino acids in a cat with FIP, Dr. Whittaker says, at least 95 percent of the time there is a change in one of those amino acids. His team believes this switch is largely driving the syndrome, though, as noted, not all cats have the same switch.

Team members are working closely with pet owners, breeders and veterinarians. Ideally, they want to follow healthy cats who may develop the full-blown syndrome. In late 2011, they found their first example of such a situation. A breeder who had been having problems with FIP allowed the team in 2008 and 2009 to collect samples from all the young cats at her cattery, all of whom were healthy at the time. In November 2011, the team got a call from a veterinarian saying one of the cats had just been euthanized due to FIP.

The team jumped into action. They compared the virus in the deceased cat with a 2008 sample when the cat was healthy. A mutation had indeed occurred. To help ensure the finding wasn’t a fluke, the team obtained a sample from a still-healthy cat from the breeder to compare that virus with the cat’s 2008 sample. The healthy cat’s sequence hadn’t mutated. Admittedly, the finding was based on only one cat, Dr. Whittaker says, “But it kind of strengthens the hypothesis. It ruled out the possibility of random gene variation.”

For now, FIP occurs worldwide and remains an enigma. As Dr. Whittaker describes the disease, it’s a big black box in veterinary medicine — meaning it exists without our knowledge of its internal workings. ❖