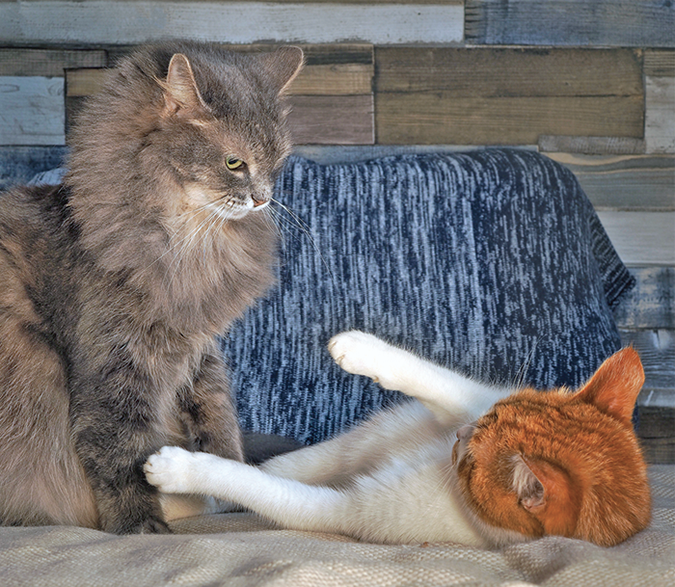 Just like people, not all cats like each other. Maybe your cat is not thrilled about the latest feline addition to the family, or two long-time housemates are no longer seeing eye to eye. Whatever the cause, there are some things you can do to manage rival cats and prevent rivalries from escalating.

Prevention is the best medicine. Every once in a while, really watch what your cats are doing and how they interact with each other. “Obvious behaviors displayed by cats who are not getting along well include growling, hissing, swatting, chasing, and attacking,” says Pamela Perry, DVM, PhD, ACVB Behavior Resident at the New York State College of Veterinary Medicine at Cornell University.But just because there are no active fights doesn’t mean that all is well in the kingdom.

Dr. Perry says, “More subtle signs that may go undetected include staring and posturing.For example, [one] cat may have his ears turned back and stare intently at the other cat.He also may block access to parts of the house, thus forcing the ‘victim’ cat to make a wide arc around him.”

These small slights can add up and cause increasing stress to the cats involved. Everyone has off days, but if you notice these behaviors happening on a regular basis, some changes may need to be made to prevent the cats from escalating to full-on fights.

Other signs that may indicate your cats are not getting along well include eliminating outside the litterbox and/or urine marking. This can be because one cat is preventing the other from accessing the litterbox, or because the two cats are marking out their “territory” in the house. If one cat is being picked on by another, he or she may frequently hide.

Whether you can let the cats work things out on their own or need to step in depends on the severity of the rivalry and the frequency of issues. Dr. Perry says, “Mild agonistic encounters, such as an occasional spat that ends quickly without injuries, usually do not need owner intervention, especially if there are enough perches and hiding spots available so that the cats can avoid each other until the conflict is resolved.” These little spats can sound terrifying due to the noise, but only some hair will be ruffled.

“If two cats are overtly fighting, they should not be allowed to work things out on their own,” advises Dr. Perry.”In addition, if one cat frequently blocks access to areas of the home or persistently ousts the other cat from a resting area, then intervention may be necessary.” For cats who are seriously fighting and at risk of harming each other, separation is in order, either temporarily or permanently.

You can step in to stop bullying early. “If owners notice one cat staring at the other or blocking access to an area, they can calmly redirect the aggressor by tossing a toy or treat nearby or by calling him away from the area and engaging him in an appropriate behavior,” Dr. Perry says. Distracting the cat who is being a jerk relieves the tension of the situation, whereas correcting the cat for his poor behavior (by spraying him with a squirt water bottle, for example) could cause redirected aggression toward the other cat.

Resource management is the best way to keep rival cats happy and out of each other’s hair. “Both cats should have separate but equal areas in the home so that they can ‘time-share’ their environment,” says Dr. Perry.”These areas should have separate resources, such as food, water, resting areas, perches, scratchers, and litterboxes, to allow the cats to co-exist without needing to encroach upon the other’s space.”

Physical barriers are often not necessary as long as resources are located throughout the house so that one cat can’t block the other cat from something he or she needs. For example, a single feeding station located in a bathroom is easy for one cat to block off. Setting up two food bowls (or more depending on how many cats you have), each located in separate parts of the house, ensures that each cat can always access food even if a bully has claimed one spot.

Also, make sure that each cat gets some one-on-one attention from you every day. Cats can consider their owners coveted resources, too! Petting and grooming can help to enforce your bond with your cat, and playtime is both fun and good exercise—and a tired cat will have less energy to put toward harassing a feline rival.

Dr. Perry warns, “If there is frequent aggression between the cats, they should be separated completely until a program of systematic desensitization and counter-conditioning can be implemented (with the help of a veterinary behaviorist).”

Behavioral management and training take time, but it is well worth the effort to ensure your cats’ safety and well-being. In the meantime, use closed doors to keep the rival cats apart so that they can’t stress out or harm each other. In extreme cases, it may be necessary to place one cat in a new home.