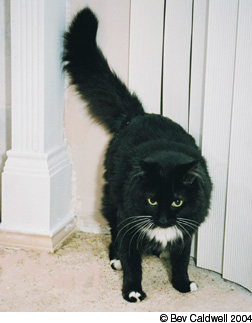 You return home and your cat rubs her head against your leg, your purse – even the bag of groceries youve placed on the floor. What owners often view as a greeting is a behavior, called marking, that helped Kittys feral ancestors survive.

Understanding what marking is, how your cat marks and how to manage the behavior can help to foster a feline-friendly home.

Why Do Cats Mark?
Cats are territorial, avoidance-based animals that prefer a solitary lifestyle. They claim an area using scent and visual marks that communicate physical, social and sexual status to other felines. The rubbing behavior described earlier is a ritual between colony members, and we believe this leads to a colony odor, according to Paul L. DeMars, DVM of Oklahoma State University, who is board certified by the American Board of Veterinary Practitioners.

A cats vomeronasal or Jacobsons organ – which is located behind the incisor teeth in the roof of the mouth – detects the pheromones deposited by other felines during marking. When your kitty assumes a grimacing pose with her  mouth slightly open – exhibiting what veterinarians call the Flehman response – she  is likely investigating another cats mark.

In the wild, the size of a cats marked territory is determined mainly by food supply. If food is plentiful, felines happily share territory with others, but when supplies dwindle, dominant cats will force others out. Sexual state also dictates territory range. Tomcats seeking mates will venture ten times further than females and mark repeatedly to discourage other suitors.

The Ways That Cats Mark
Cats mark in four ways: by rubbing, and scratching and with urine and feces. But the different methods have different motivations, explains Dr. DeMars. Facial pheromones are happy cat pheromones, while urine pheromones are more stress-related.

Cats have enlarged, scent-releasing sebaceous glands around their mouths, on their chins, in their ear canals, on the neck and shoulders, near the anus and at the base of the tail. Grooming spreads your pets signature scent over her entire body.

When your cat rubs against something, she scents her personal space, which helps her feel secure. Rubbing also mimics the comforting behavior mother cats use with their kittens. Your house (and you yourself) are covered with a potpourri of feline fragrances.

Cats typically mark people with their foreheads and use their cheeks or chins for inanimate objects.

New items, people or pets alter Kittys scent structure and compel her to mark the additions, sometimes excessively. Your feline may first rub a previously marked object for reassurance before wiping against the interloper. Severe environmental changes may cause anxiety and lead to marking with scratches, urine and feces (see information in sidebar). These feelings are exacerbated in blind cats, who must navigate their territories using memory and scent.

Marking with scratches stakes out territory and is found on commonly used doorways, sleeping quarters and boundaries that your cat thinks are threatened. Kitty uses her paws and claws to create a visual and olfactory communication mark, the latter via sweat glands in the skin of her paw pads. Scratching also communicates size, which is why cats often reach up and scratch downward.

Grooming scratching – which helps remove old skin and claw sheaths and to maintain muscle tone -differs from marking scratching because the latter repeatedly occurs in the same spot.

Urine Spraying/Marking
Both females and males spray and mark with urine, although the behaviors are more common in males and the scent more pungent in non-neutered toms. A fatty ingredient allows cat urine to cling to surfaces.

These behaviors are deliberate actions intended to send different messages. Cats twitch their tails and spray from a standing position onto a vertical surface, usually in a sheltered location (to prevent removal by rain) at another cats nose level. The message is, Keep out or in the case of some males, Look, here I am. Come back when you are in heat.

Urine marking from a squatting position most often stems from anxiety. Its purpose is to cover up an unfamiliar scent, claim a new item as territory and regain a sense of security. New animals, people or living arrangements and schedules can provoke urine marking. Conflict with a family member, bullying behavior by another pet, or even seeing strange animals from a window can be other causes.

Urine marks on floors or in tubs are unlikely to indicate true marking behavior. Your pet may have a lower urinary tract disease that causes her to have a sudden and unexpected urge to urinate, or makes her want to avoid the litter box (which she associates with painful urination). Take her to your veterinarian for a checkup.
Thankfully, fecal marking, also known as middening, is rare. Like urine marking it indicates that something is wrong and the location of the mark is the first communication as to the cause.

Feces left next to a litter box may indicate a problem with the intestinal tract or it could mean, My bathroom environment is unpleasant. Other changes in the scent structure, such as an overnight house guest, can also incite this conduct.