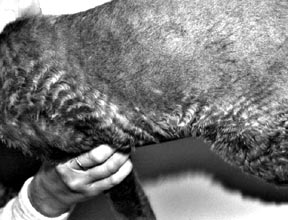 A car backfires as it passes your house. Startled, your cat flips from her window perch onto the floor and begins washing herself. Unrelated to her sudden fright, the licking at that moment is a displacement behavior – an activity that is performed at an inappropriate time. Displacement behaviors are normal behaviors that are out of context for the situation, says Wayne Hunthausen, DVM, a pet behavior consultant who, along with Gary Landsberg and Lowell Ackerman, is the author of the Handbook of Behavior Problems of the Dog and Cat.

They are comparable to chewing fingernails in people and occur when the animal experiences mild conflict or stress. Displacement behaviors may include head-flicking, rapid licking, dashing or pouncing on imaginary prey, eating, vocalizing, yawning, and, most commonly, grooming. No one knows exactly why they occur, he says. The theory is that the displacement behavior helps to diffuse nervous energy or stress.

From repetitive to compulsive
Displacement behaviors are usually of no concern to the pet owner. They are typically benign, unless they interfere with the pets quality of life, explains Hunthausen.

When the displacement behavior occurs frequently and repetitively, it develops into a compulsive disorder – an activity that is constant with no goal or function, such as over-grooming. The activity starts out as a displacement behavior, but then physiological changes occur in the cats brain. The cat loses the ability to control starting and stopping the behavior, says Hunthausen. At that point, it becomes a compulsive disorder.

Compulsive disorders interfere with the cats quality of life and may lead to self-inflicted injury, such as licking the skin raw from over-grooming or biting the end of the tail until it bleeds. Compulsive disorders in cats may include tail chasing or chewing, pica (wool sucking), or psychogenic alopecia (hair pulling).

The most common cause of compulsive disorders is stress within the cats environment. Anxiety may arise from many causes: confinement, boredom, social isolation, inadequate stimulation, too much or the wrong kind of attention, other pets in the home, certain people or animals from whom the cat cannot escape, changes in the owners schedule, punishment such as the excessive use of spray bottles, booby trapping areas the cat is not allowed to inhabit, or environmental changes such as moving or the addition or loss of family members.

Detective work
Before assuming your cat has a compulsive disorder, have your veterinarian perform a complete medical workup, which may include a skin scraping for bacterial and fungal cultures, radiographs, and skin biopsy to rule out possible medical causes for the behavior. Once medical problems have been excluded, the veterinarian should take a complete behavioral history, including a determination of whether the owner has played a part in development of the chronic behavior by inadvertently reinforcing it. At some point, a veterinary behaviorist should be brought on board to prescribe a course of action as well as medication if necessary, says Hunthausen.

Solutions
Once a behavioral problem is confirmed, identify the source of the stress or conflict in your environment and seek to eliminate it. You should be careful not to call attention to the behavior. Avoid attention, positive or negative, that reinforces the behavior, says Hunthausen.

Begin a program of counter-conditioning, which involves reinforcing an emotional response to a stimulus or situation that is not compatible with the emotional/behavioral response you are trying to eliminate. For example: Every time your cat that is afraid of children hears them playing in the yard and looks towards their direction (but is far enough away that she doesnt act fearful) give her a treat.

In addition, Hunthausen recommends that the environment be changed to be consistent and relaxed. If there is chronic stress, determine if the cat gets enough and the right kind of attention. Do family members interact with the cat or yell at her? asks Hunthausen. Provide more mental and physical stimulation. Get the cat to play until shes tired, says Hunthausen. Physical exercise has a calming affect.

Enrich the cats environment with interactive toys, such as fishing-pole or wand toys that are designed to increase physical exercise and mental stimulation. Tossing crumpled paper balls are great ways to exercise your cat. Roll a plastic golf ball in the bathtub for kitty to chase. Multi-level cat trees give your cat a place to climb as well as to sharpen her claws. Give the cat more places to get up and climb on, says Hunthausen.

If there is something specific causing the stress, such as visiting grandchildren, work on the visits to make them more relaxing for the cat. Give the cat time out away from the kids, says Hunthausen, or have treat parties with the kids gently tossing treats to the cat.

Treatment for compulsive disorders may involve removing the distressing environmental change, but in some cases, such as the arrival of a new baby, the cause may be permanent. An owner can take steps to decrease the stress, however, by spending quality time alone with the cat, petting or playing with her, says Hunthausen.

If your compulsive cat is chewing on things she shouldnt, provide alternatives.

Orient the cat to chew on acceptable things, like rawhide, says Hunthausen. Spray off-limit items with something offensive, such as bitter apple.

If your cat is chewing her tail, make sure she gets enough exercise and play time. Wearing an Elizabethan collar will keep your cat from reaching her tail until it heals. If the tail is bandaged, you can spray the bandage with bitter apple in an attempt to keep her from attacking it.

In some cases, medication may be required instead of or along with a behavioral modification program. Discuss drug therapy with your veterinarian.