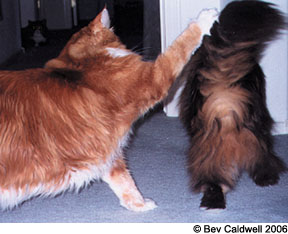 One of your previously mild-mannered indoor cats attacks a cat companion for no apparent reason. As the victim scurries out of the room, you notice a cat belonging to your neighbor loitering in your front yard. That same previously mild-mannered feline is now tense, puffed up and ready for action – having just redirected his frustration onto a housemate.

Redirected aggression can occur when an indoor cat sees something outside that he or she objects to. The intruder can be a cat or other animal that for some reason startles or offends the indoor cat. Because the cat cant get at the intruder, he vents his anger on the nearest body.

Cats redirect aggression for one of two reasons, according to John C. Wright, PhD, a certified applied animal behaviorist, professor of psychology at Mercer University, and author of Is Your Cat Crazy? Solutions from the Casebook of a Cat Therapist. When provoked, some cats target a housemate because its safer than attacking the provocateur, which might fight back.

In the second scenario, the aggressor really wants to get to the cat outside thats invading its territory. Since he cant do it, he redirects the aggression to something he can bite. Its the classic frustration-aggression hypothesis, says Dr. Wright. When a goal-directed object is unavailable or blocked, the pent-up energy is expended as aggression and redirected onto whatever is available, because the situation doesnt allow energy to be expended for obtaining the desired object.

Redirected aggression is the feline version of the spouse who has a hard day at work and comes home and takes it out on the family. Because the person cant take it out on co-workers or the boss, the family becomes an easy target.

Its Not My Job
In a multi-cat household, how cats react to outdoor intruders is influenced by a variety of factors, including stress levels and the cats history with other animals. Its a combination of environment and genes, says Kimberly Barry, PhD, a certified applied animal behaviorist at Town Lake Animal Center in Austin, Texas. Some cats havent had a lot of experience with other cats at a young age, while others have personalities that are more easily aroused.

Some cats may not perceive the intruder as a threat. Some indoor cats may choose not to react when another cat invades their territory or personal space, says Dr. Wright, because it isnt their perceived job to protect their territory or they have no reason to want to attack.

Territoriality may or may not play a role. In general, cats may not establish formal territories, but react to one another based on their familiarity with the other cat, says Dr. Barry. If one took the two cats in question to a neutral territory, they still might not be fine with each other.

Sexuality may or may not be a contributing factor. The role between testosterone and aggression is complex, and neutering may not eliminate the desire to fight, especially if the indoor cat has had experience fighting. Add to the dilemma the fact that even females may take exception to the outdoor cat. Ultimately, so many variables exist that defining the cause is not always possible. Sometimes there is no answer, says Dr. Wright.

Whatevers Handy
The victim of redirected aggression may not be aware of the event that triggered the episode, but is simply nearby. The aggressor may retaliate against an adolescent kitten, an adult cat companion, a dog, another household pet or even the human caregiver. It doesnt have to be another cat, says Dr. Barry.

As with the aggressor, no common personality traits link the victims. Victims of redirected aggression seem to be whoever is right there, says Dr. Barry, and the status of the relationship between the two animals before the event may not have an effect.

What begins as a single act of frustration may become a habit. The aggressive cat may terrorize the other animal, says Dr. Barry. If the redirected aggression continues, it can lead to a variety of behavior problems in both the aggressor and the victim. Sometimes the frustration leads to displacement behavior, says Dr. Wright. At its mildest, the displacement behavior may include licking and grooming at inappropriate times. If left untreated, the behavior may lead to more serious problems including urinating or defecating out of the litter box.

Diffusing the Situation
Occasionally the situation may return to normal, but if not, you may have to embark on a path of environmental and behavioral modification. Close curtains or put something in front of the window to keep the cat from gaining access to it, advises Dr. Wright. Provide an incompatible activity in another room, such as structured play, fishing-pole or catnip toys, or even clicker-style training. Keep the training positive by pairing it with food rewards. Teach a really nice recall command to get the cats out of the situation, says Dr. Barry. Shake a can of cat treats or make a can opener sound so that any tension in your voice doesnt add to the situation.

If necessary, separate the cats. Because the victim has undergone trauma, provide positive activities to boost the victims self-esteem. Direct the aggressor into more people-oriented activities. Once both cats are more stable, allow them access to the area of the house where the attack took place. Do what works and build on it, says Dr. Wright. The goal is to interrupt the pattern and replace it with a healthy one.

If you know to whom the intruding cat belongs, talk to the person about the situation and urge him or her to keep the cat confined. If they are responsible owners, they will make an attempt to do something about it, says Dr. Wright. If the cat has no owner, consider trapping it and taking it to a humane shelter.

Keeping the Peace
As always, an ounce of prevention is worth a pound of cure. If one of your cats is acting in an uncharacteristic way at certain locations, pay attention to what is on the other side of the window. Interrupt the behavior before it becomes a pattern, says Dr. Wright. Pay daily attention to what your cat is doing. Dr. Barry concurs. Its a management issue, she says.