Your young cat likes to dart out from under the table and grab your pant leg like a lion taking down a gazelle. This was cute when he was a two-pound kitten, but not so much now that he is 12 pounds of lean muscle. What can you do?

“Play aggression is a common behavior complaint, especially in young cats,” says Pamela J. Perry, DVM, PhD, ACVB, behavior resident at the New  York State College of Veterinary Medicine at Cornell. Like other species, including dogs and humans, young cats use play to practice and perfect life skills, and for an obligate carnivore such as a cat, hunting is an important skill to practice.

“Hunting behaviors are a common component of cat play behavior,” says Dr. Perry. “Stalking, chasing, pouncing, and biting are typically seen in kittens and young cats (because they engage in play more frequently) but also can be displayed by older cats.”

Kittens start trying out their moves on siblings or their tolerant mother. As they grow and explore their surroundings, other targets become apparent: toys, leaves, shoelaces. Eventually, young cats will start stalking live prey if the opportunity arises, and they continue to play to hone their skills. Adolescent cats have more energy, making play sessions longer, more frequent, and more intense. Dr. Perry warns, “If a cat does not have suitable outlets for these behaviors, he may target his owner.”

As you hopefully do not have a mouse problem for your young hunter to deal with, your cat will need other appropriate channels for his ferocious instincts.

“Cats should be provided with suitable outlets for hunting behaviors in the form of toys that flutter, bounce, or move erratically to encourage the cat to stalk, chase, and pounce on them,” says Dr. Perry. Wands with feathers or fuzzy toys on the end are perfect, because you can move them around to capture your cat’s interest and they provide something to chomp down on when he catches it.

Never use your hands to wrestle with your cat. This type of play encourages him to think of your hands as a playmate like another cat, and human skin doesn’t stand up to play bites very well. If you have already been doing this with your kitten, stop now to break the habit, as those kitten nips will hurt a lot more when he gets bigger!

“If the kitty prefers sneak attacks (the “slash-and-dash” type of ambush), the owner can preempt these attacks by tossing a toy past the cat’s hiding place, e.g., before walking down a hallway,” says Dr. Perry. Pay attention to your cat’s favorite lairs so that you know where he is likely to be waiting. Tossing the toy still gives him the thrill of a moving target, but then allows you to walk by unscathed.

For some overenthusiastic hunters, it may be necessary to rearrange the “jungle” to curb play attacks. If he likes to jump down from above, prevent him from accessing high perches. Shut him out of rooms with high shelving, or move shorter pieces of furniture that he can use as a stepping stone to a higher spot. If he likes to stage his hunts in areas where it is difficult for you to see his lair and be prepared, move his cover (for example, if he hides under an end table next to the door to pounce, move the end table to another room or get one that is taller with thin legs so it doesn’t feel like as secure a hiding place).

Prevention is the cornerstone of controlling rough play, but there will be slip-ups. If your cat launches a sneak attack, redirect him with a toy. If he gets a hold of your pant leg, gently but firmly remove him and then redirect with a toy.

If your cat play bites when you are petting him, remove attention (and your hands) and ignore him for a few minutes. Then you can either try again or, if he seems to be pretty wound up, get a feather wand out to burn off some energy with play first. Keep in mind that cats often grab their “prey” with both paws and then draw it in to bite down—if your cat grabs your hand like this, he is not being cute and lovey. Free your hand as calmly (and boringly) as possible and then ignore him for a few minutes and/or redirect with an appropriate toy.

Dr. Perry warns, “Punishment should not be used because there is a risk that it could exacerbate the attacks or cause the cat to fear his owner.” It can be difficult to stay calm when you abruptly find out that you’ve been assigned the role of Jogger 1 in your mini mountain lion’s home movie, but it will get you better results in the long run. Pay attention to your cat’s preferred strategies and come up with a plan of your own to outsmart him and prevent attacks from happening.

“When the attacks are uninhibited, frequent, or cause injury, the owner should seek professional help,” says Dr. Perry. “Although ‘hunting’ behaviors are most often seen in kittens and young cats, the seriousness of the resulting injuries should not be ignored.” Contact an animal behaviorist who works with cats to come up with strategies to manage your cat’s behavior and make your home safe for everyone. 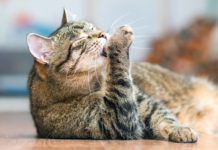