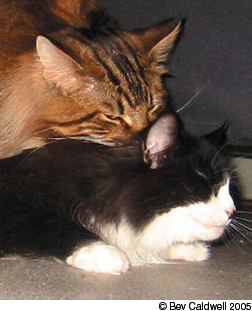 Why does Toby, your normally well-behaved cat, suddenly insist on lifting his tail and spraying the legs of your dining room table with particularly foul-smelling urine just when the guests are arriving? Why do the cats in your neighborhood keep you awake on warm summer nights with their incessant yowling and screeching? And why do virtually all veterinarians strongly recommend the routine neutering and spaying of kittens?

Such questions are frequently asked, even by people who have owned a cat for many years. The answers can be gained through a basic understanding of feline sexual anatomy, the speed with which cats mature and acquire reproductive capability, their characteristic mating behaviors as adult animals and their astounding ability – and apparently relentless instinctive drive – to reproduce more…and more…and still more of their own kind.

Sexual Anatomy
In almost every respect, notes Peggy Root, DVM, associate clinical professor of small animal reproduction at the University of Minnesotas College of Veterinary Medicine, the components of the feline reproductive system correspond to those of humans.

The female systems major components include the vagina; the cervix (the entrance to the uterus); the uterus; two oviducts; and two ovaries. Female cats also have four or five pairs of nipples, located on the lower abdomen and chest.

The male system comprises the penis; two sperm-producing glands (testes) that are enclosed in the scrotum (a fur-covered sac positioned just below the anus);  the prostate gland; two bulbourethral glands (which produce seminal fluid); and the vas deferens, a tube that carries sperm from the testes to the urethra, a channel within the penis. As in humans, the male cat also has nipples that are nonfunctional.

The sole unique feature in male cats, says Dr. Root, is an array of tiny needle-like projections that encircle the end of the penis. There are rows and rows of them, she says. They are not hard – their texture resembles scar tissue. We dont know why theyre there. But if you neuter a male, they go away, and if you then give the animal testosterone, they come back. So they apparently play some role in the intact male.

Coming of Age
Female cats (queens) typically reach puberty and are capable of sexual reproduction when they are between seven and 12 months of age, depending on their overall health and, to some extent, their breed. For example, says Dr. Root, Short-haired cats, such as Abysinnians, tend to start showing sexual behavior and are ready for breeding at six to eight months, while long-haired breeds, such as Persians, may not reach puberty until they are 11 or 12 months old.

Onset of puberty also depends on weight, with large cats, such as Maine coons, maturing later than leaner breeds. In general, says Dr. Root, a queen will reach puberty when she is about 80 percent of her adult weight.

The sign that a female has reached puberty is her demonstration of receptivity to a males sexual advances. She is then considered to be in estrus, commonly known as heat.  A queen will go into heat for about a week, says Dr. Root, and this occurs about every two weeks starting in the early spring and lasting through late autumn in temperate parts of the Northern Hemisphere. Then the cycles will stop, and they wont resume until the days grow longer again.

While human females normally ovulate monthly, felines are what Dr. Root calls induced ovulators.  That is, a queens ova (eggs) will not be available for fertilization until certain hormones have been released into her system, and this release is stimulated by her coupling with a tom. Indeed, she may not ovulate for several days following sexual intercourse. But thats all right, says Dr. Root, because the males sperm can remain alive in her vaginal tract for a week or so. If ovulation and pregnancy do not occur within a heat cycle, a female will simply go out of heat and then enter another period within a few weeks.

The Mating Game
The act of mating, according to Dr. Root, is very quick – were talking seconds! At the start of her heat cycle, the female will be clearly restless and very vocal. Those screeching sounds you hear at night are not made by males and they are not made by cats that are fighting, she says. They are made by females in the process of mating.

An indoor queen is likely to rub her head against her owners legs – or a refrigerator, for that matter – and will mark various objects around the house with an oily secretion containing pheromones, chemicals whose scent indicates her willingness to mate. She will also roll on the floor, crouch on her front legs, raise her rump and wave it back and forth. If she remains indoors, this behavior – accompanied by the utterance of deep guttural howling – will go on for a few days and then cease until her next estrus sets in. If she ventures outdoors, the result is very likely to take another form.

In that event, a tom who has been observing the females display and has been inhaling the seductive scent of her pheromones will approach the queen and grab her with his teeth at the scruff of her neck. This is not an aggressive act, says Dr. Root. Its just to position her, and a female in heat will cooperate. Shell drop her forequarters to the ground, lift her hind quarters into the air, and form a nice dish-shaped posture that allows the male to fit nicely into her.

In a flash, the male will introduce his erect penis into the queens vagina, ejaculate and then swiftly retreat to a distant spot, looking on distractedly as the queen launches into what Dr. Root calls an extreme set of behaviors – throwing herself around on the ground, screaming and rolling frantically. The tom stays well away from her while she does this, says Dr. Root.

A Call for Neutering
About 80 percent of the time, this interlude will result in pregnancy and, about two months later, a new batch of kittens. Although a queen will tend to spend most of her time with her litter, female cats can – and frequently do – resume their heat cycles and  become pregnant again within as little as 48 hours after giving birth.

Cats are tremendously prolific, Dr. Root points out, and as a result, millions of them are born and soon thereafter euthanized every year. Indeed, the American Humane Association estimates that between 11.1 million and 18.6 million unwanted cats and kittens are put to sleep annually in the U.S. alone. One study has found that 85 percent of cats that are brought to shelters are destroyed.

So, says Dr. Root, unless youre breeding pedigreed cats for a very specific purpose – for showing, for example – I strongly recommend the neutering of males and the spaying of females when they are kittens. We really dont need more cats than we already have.