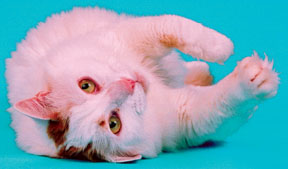 When your cat snuggles next to you or on your lap and starts that sweet purring, it makes you happy that your feline is content and relaxed. Sometimes you can hear the peaceful rumbling and other times you can just feel it. And when you know that you have had something to do with making your cat purr, its a wonderful feeling.

Purring is a natural form of expression for cats. Even some big cats – lions, pumas, and cheetahs – purr. But what exactly is purring? What causes it, and why do felines do it?

Many Reasons
A kitten is able to purr long before he can open his eyes – often by the second day of life – probably to let his mother know that he is getting enough milk. And the mother cat purrs back, reassuring her kitten that all is well. Some experts believe that this was the original purpose of purring: communication with the mother cat.

But now we believe that cats purr for many different reasons. The most obvious – and delightful – is the purr of contentment or pleasure. Most cats will purr when being stroked. Some will purr at the mere sound of your voice.

But cats purr at other times you would not expect, says Linda Mizer, DVM, PhD, senior lecturer in the Department of Biomedical Sciences at Cornell Universitys College of Veterinary Medicine. Cats purr when they are frightened, ill or even injured. Mother cats often purr while in labor and giving birth.

Animal behaviorists believe that cats purr under stressful conditions to comfort themselves and to signal to other cats. A frightened cat may purr, for example, to indicate that he is being submissive or non-threatening to other cats. On the other hand, an aggressive cat may purr to let other cats know he is not going to attack.

Some purr specialists believe that purring happens only when the cats choose to purr, along the lines of growling and meowing. But I dont think purring is always the result of intentional mental effort, but more of an automatic response, says Dr. Mizer. There could be numerous stimulating events – both pleasant and unpleasant – that might lead to the same physiological events and result in purring.

The Fauna Communications Research Institute in North Carolina is a nonprofit institute dedicated to the study of animal communication. Founder Elizabeth Vonmuggenthaler – who has received a National Science Foundation grant to study purring – speculates that the vibration of purring seems to help cats in healing themselves from illness or injury, especially when the bones are involved. She also claims that some studies have shown that domestic cats purr at the same frequency as cougars or cheetahs.

How Purring Works
There are a number of theories, but no one really knows for sure how purring occurs, says Dr. Mizer. One idea is that purring involves the vocal chords. Or it may also involve the vibration of certain vessels, says Dr. Mizer. Still another opinion points to purring occurring in the vibrations of the hyoid apparatus, a series of small bones connecting the skull and the larynx that serves to support the tongue. According to the Fauna Institute, purring may be caused by the vibration of air in the larynx and diaphragm. Some experts claim that a cat can even purr after its larynx has been removed, using just the diaphragm.

However its done, the purring that occurs when your cat is content  can be a pleasure for both of you. But dont feel bad if your cat doesnt purr often. Some cats purr infrequently or very slightly. Says Dr. Mizer, We have a cat that didnt purr too often as a kitten [she had been abandoned], but now that shes grown and secure with us, she purrs a lot.