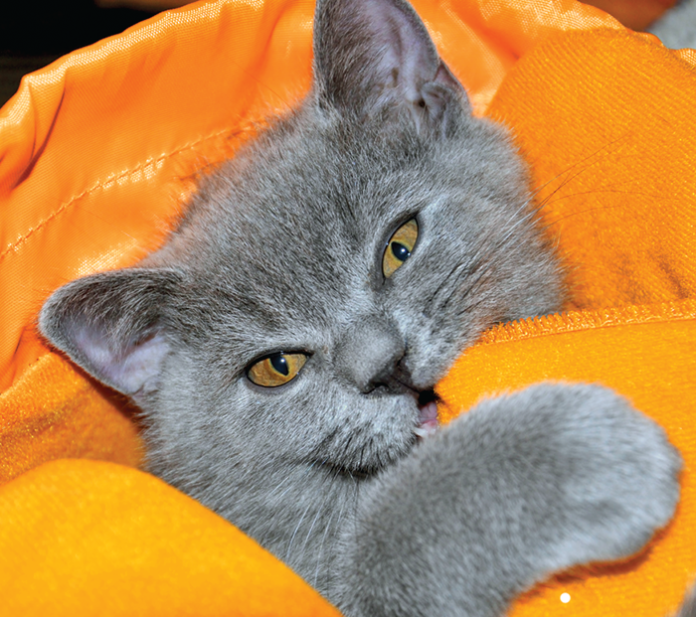 Cats often use seemingly odd ways to cope with stress, such as sucking on fabric (wool is a kitty favorite) or eating bizarre items, like a bread-bag twist tie. Consuming any non-nutritive object is a cause for alarm. While choking is rare, ingesting fabric, string, plastic, or any other non-food item can lead to gastrointestinal tract obstructions, requiring emergency life-saving surgery.

“Pica” is the proper term for the ingestion of abnormal substances. Pica is the medieval Latin name for the magpie, a bird known for eating anything. People, dogs, and other animals can also demonstrate pica. In cats, a study from the United Kingdom showed that the most common material cats sucked or chewed on was wool (93%), followed by cotton, man-made fabrics, rubber, plastic, paper, and cardboard.

Unfortunately, no definitive cause has been found for pica, but early weaning of kittens may be a contributing factor (see sidebar). Many cats show wool-sucking behavior as young as 6 months of age, and most cats that develop it are noted to express the problem by 18 months of age.

Stress, anxiety, and boredom can lead to a resurgence. Chewing or sucking on objects is believed to release endorphins, which are pain-relieving hormones that lead to warm feelings of well-being and comfort (this is also a reason why some children suck their thumbs). In some anxious cats, chewing behaviors serve as coping mechanisms, with the resulting endorphin rush becoming addictive and developing into an obsessive-compulsive disorder (OCD).

Low-fiber intake may be a cause. Fiber promotes a feeling of fullness. Some cats do better with high-fiber kibble in a separate bowl that they can eat at will. Potted cat grass or catnip can help, too.

Remove all the items your cat likes to suck on, such as afghans, wool sweaters, scarves, and heavy socks. Offer cat-safe rubber toys scented with fish oil and additional dry cat food. If you choose the latter, make sure that the dry food used is part of your cat’s calculated daily caloric intake so you don’t cause obesity.

Be aware of what kitty is doing. If your cat starts to chew or suck on something inappropriate, startle her with a sound, such as a loud tap on a tabletop. The minute she is distracted, get her attention with a treat or toy, and lure her away from the object of her desire. Remove the object from her reach, at least temporarily, if possible.

Consider stress. If the behavior is new, look for triggers, such as cat aggression. Work to find solutions, such as separating feuding cats or placing a favorite perch back where it used to be. Feliway, a calming, pheromone-like substance, reduces anxiety levels in some cats and may reduce aggression.

Increase your cat’s environmental enrichment. A busy, mentally stimulated cat has less time to participate in compulsive behaviors. An outdoor catio (see January 2020 “The Ins and Outs of Catios,” available at catwatchnewsletter.com), a cat tree or “kitty condo” that she can crawl up or hide in, and, especially, extra play time with you can help. Spend time with her, tossing kibble or ping-pong balls for her to chase.

Use bad-tasting, commercially available pet repellents on fabrics to deter chewing. Do not just spray one thing, although her favorite sucking spot is certainly the place to start. Rotate the items sprayed so your cat learns that all fabric tastes bad.

If all else fails, consider working with a veterinary behaviorist. Fluoxetine (Prozac) is a selective serotonin reuptake inhibitor (SSRI) antidepressant that can help with OCD, but it should be used in combination with behavior-modification management techniques.

A genetic predisposition to wool-sucking and -chewing behaviors has been suggested in the Siamese and other Oriental breeds. An August 2015 study of 204 Siamese and Birman cats was conducted through Tufts University Cummings School of Veterinary Medicine. Researchers looked for physical characteristics or environmental triggers that could cause pica (abnormal chewing or sucking on fabric, plastic, metal, or paper). Cats who showed other compulsive behaviors, such as psychogenic licking, were not included. Half of the cats were known to wool-suck.

All of the affected cats had an intense appetite. Early weaning and a small litter size were correlated with wool sucking in the Birman cats. In Siamese cats, a correlation with health problems was noted.

A September 2017 study from the University of Helsinki looked at over 5,000 cats to see if early weaning (removed from queen before 12 weeks of age) might influence aggressive behaviors and stereotypic /compulsive behaviors. Both aggressive and compulsive behaviors were lower in kittens weaned after 12 weeks of age, with fewer if they were weaned after 14 weeks. Over 40 breeds of cats were included in the study,  and breed was not determined to be a factor. The researchers felt that early weaning of kittens caused neurobiological changes in brain function that may contibute to pica, possibly disruptions in cortical basal ganglia circuits and interference with normal dopamine response.