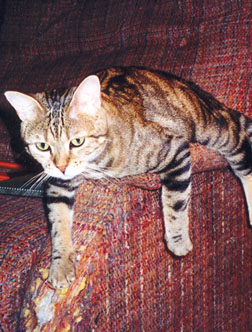 Your cat seems to have no respect whatsoever for your property, especially your fancy dining room table, your leather club chair, and, worst of all, the beautiful upright piano that graces a corner of your living room. At every opportunity, he uses the legs of these elegant pieces of furniture as scratching posts, and they look it – so hacked up and pitted that youre actually ashamed of their appearance when friends drop by.

A summary solution to the problem occurs to you. You could simply take your furry little friend to a veterinary clinic and have its claws removed. No claws … no more damage to the furniture.

But hold on! Maybe theres a kinder, gentler way to deal with the scratching issue. Indeed, James Richards, DVM, director of Cornell Universitys Feline Health Center and editor-in-chief of CatWatch, would like to see cat owners consider declawing – a procedure called onychectomy – only as “a last resort.”

A cats claws are epidermal structures comparable in makeup to human fingernails and toenails. However, they differ significantly from human nails and, for that matter, from those of all other carnivores, in that a cat can project them at will. In their retracted position, the claws are enclosed within the skin of the paws, held there by tough elastic bands of tissue (dorsal ligaments). To expose its crescent-shaped, dagger-sharp little claws for use, a cat must employ a muscle called the deep digital flexor, which is strong enough to overpower the resistance of the dorsal ligaments elasticity. When this muscle is relaxed, the claws immediately retreat within the paw.

Feline claws serve several purposes. They are indispensable to a cat for climbing up tree trunks and maintaining a grip on a slender branch. They allow a cat to seize and hang onto prey. They are also used to mark a cats presence in an area; when scratching at a tree trunk or a patch of turf, a cats pads secrete substances whose odor is detectable to other felines.

Scratching behavior is normal for a cat. It serves to scrape away outer layers of the claws to keep them sharp; it enables a cat to exercise the extending and retracting muscles and ligaments in its paws; and it strengthens an animals legs and shoulders.

As surgical procedures go, explains Dr. Richards, onychectomy is comparatively simple. In most cases, only the front paws are declawed, so that the animal will still be able to climb small-diameter trees and to defend itself if necessary. The cat is placed under general anesthesia, a tourniquet is wrapped around its forelimbs, and the feet are thoroughly scrubbed and bathed with antiseptic. During surgery, the nail is not pulled out. Instead, the end bone of each digit holding a nail is amputated, usually at the joint, and the skin is brought over the end, leaving a smooth surface covered with skin.

The paws are then bandaged securely, with the bandages remaining in place for a variable length of time, depending on the veterinarians preference. In some cases the patient can be taken home immediately following surgery; in other cases, it may have to remain hospitalized for a few days.

Research has shown that onychectomy causes neither psychological problems nor an increase in undesirable behavior among cats that undergo the procedure. However, Dr. Richards notes that the surgery carries a number of risks. “Most often, it goes off without a hitch,” he says, “but there can be problems – excessive bleeding and infection, for example, which may result in the need for additional surgery. And some cats experience postoperative lameness. In fact, of all elective surgical procedures, onychectomy is one of those that is most highly associated with postoperative difficulties. In any case, the operation is bound to be painful. Although we try to emphasize pain control, its still likely to be unpleasant for a cat to go through.”

In recent years, declawing by means of laser surgery has gained favor with some veterinarians. This procedure, which employs an intensely focused light beam instead of a scalpel to remove the claws, tends to produce less pain, bleeding, swelling and scarring. In Dr. Richardss view, however, laser surgery isnt necessarily superior. As with conventional onychectomy, he says, “It all depends on the hands of the surgeon.”

In general, Dr. Richards considers the declawing of a persistently scratching cat to be a reasonable option in only two situations: (1) if the cat shares a household with a person having a seriously compromised immune system – an HIV/AIDS patient, for example -or a severe bleeding disorder; or (2) if the cats owners appear likely to abandon the animal or to have it euthanized unless the animal undergoes the procedure.

In most cases, it is the destruction of furniture that leads owners to consider declawing their cats. But there are several steps far less extreme than onychectomy that owners can take to discourage this behavior or at least minimize its unpleasant results. For example:

Install a scratching post in your home – a sturdy piece of wood, for instance, about three feet in height, that is covered with carpeting, burlap or other fabric that does not fray but will show the marks and maintain the scent of the cats scratching. Ask your veterinarian about scratching post training.

Trim your cats nails carefully every week or two. If you are wary of undertaking this task, consult your veterinarian or an animal groomer for advice on how to do it properly. (You may also want to view an online video about claw trimming on the Cornell Feline Health Center website at www.felinevideos.vet.cornell.edu/.)

Purchase plastic nail caps that can be glued on to your cat’s claws. These products are widely available, inexpensive and must be replaced only once every month or so.

It is also possible, says Dr. Richards, that, with the guidance of a veterinarian or animal behaviorist, even the most determinedly destructive cat can be trained away from the kinds of scratching behavior that most owners find quite exasperating (and rightfully so).