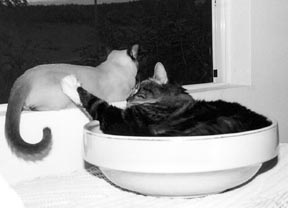 Much like snowflakes, cats tails possess endless individuality. They can be long and slender, long and thick, short and stocky, or somewhere in between. A cat owes the size and appearance of her tail to genetics – the anatomical traits she has inherited from the feline gene pool, which also determines her coat pattern, eye color and overall body type. The tail provides a cat with balance, and its movement can help us to understand what is going through our cats mind – sort of a feline version of sign language.

Tail movement is an integral part of a cats body language, offering clues to her mood. Of course, tail movement is just one aspect of the cats mode of expression – like hand gestures are with humans – and deciphering what Kitty is communicating involves integrating tail movement with all other displays, including vocalization.

What It All Means
If your cat walks with her tail erect – not puffed up and gently waving back and forth occasionally – she is expressing a willingness to interact. Its a way that cats talk to other cats, says Karen Overall, VMD, PhD, diplomate, American College of Veterinary Behaviorists and Animal Behavior Society Certified Applied Animal Behaviorist. Its classic behavior when you put food down for strays and they come with tails up, anticipating action that is not hostile.

When one cat passes another, she will raise up her tail. They acknowledge each other and the rights of way, says Dr. Overall. Its a feline version of tipping your hat. If your cats tail is up and bouncing around when you talk to her, she is signaling appreciation. Its an affiliation gesture, says Dr. Overall.

A droopy tail may indicate that your cat is just checking out her environment and not seeking any action. Shes sort of copacetic, says Dr. Overall. If she flicks her tail, she may be changing her mind about what she is doing. Shes definitely getting more aroused, says Dr. Overall.

Some cats seem to always flick their tails. Rapidly flicking tails indicate agitation. These cats are much more reactive, maybe like people who interact with their environment by always talking, says Dr. Overall. Cats who flick their tails are always commenting on something. It may be an indication of anxiety.

If your cat seems to be angry, dont wait until she strikes to find out. Look at her tail. Is the tail puffy? Is it moving? How does it fit with the position of the body and correlate with facial expressions? says Dr. Overall.

A Complex Structure
A tail is the extension of a cats vertebral column, and its bones – called caudal vertebrae – are numbered as they are in other areas of the spine. Caudal vertebrae are abbreviated Cd1, Cd2 and so on, says Braam Bezuidenhout, DVSC, anatomist and senior lecturer in biomedical sciences at Cornell University College of Veterinary Medicine. The number of caudal vertebrae varies widely, but generally 19-21 are present.

Muscles Play a Part
There are muscles that surround the tail to give it a smooth feel, and to enable a cat to move the tail in expressive gestures. Four bundles of muscles are found on both the dorsal (upper) surface and the ventral (lower) surface of the tail. On each side, there are small, short muscles that run between successive vertebrae with ligaments connecting them. Where the tail starts, a cat has big muscle masses that progressively get smaller towards the tip of the tail. Thats why the tail tapers, says Dr. Bezuidenhout.

Some cats have tails that feel thick, while others seem thin. Its a combination of the thickness of skin, larger vertebrae and more robust muscles, says Dr. Bezuidenhout.