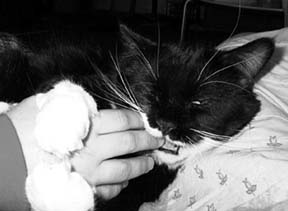 Your kitty is sweet and gentle, and youre confident that she depends on you for comfort and care. But then out of the blue, she attacks as you round a corner or come down the stairs. Or, youll be stroking your purring cat gently when, all of a sudden, he stops purring, turns around and bites and scratches you aggressively.
Why would your cat attack the hand that feeds it?

Just like dogs, cats can be aggressive by nature. They may not attack the mailman the way a dog might, but attacking their owners occasionally is not all that unusual, says John Wright, a certified applied animal behaviorist and professor of psychology at Mercer University in Georgia. However, its not normal for cats to be overly aggressive and cat lovers need to learn the difference. Aggressive cats can be dangerous and may need special attention.

When Its Play
Play aggression, for example, is normal for kittens and cats under two years of age, especially when no other cats live in the house. The cat may launch a surprise attack as he would in the wild. Such aggression usually involves stalking, batting at an object that resembles prey (such as your moving feet), pouncing, scratching or biting that usually doesnt break the skin. This sort of aggression in older cats is most common in animals that dont get enough exercise and in male cats that are not neutered.

Dont Pet Me Anymore
Some cats will suddenly no longer tolerate being petted and attack the person who, just moments before, was eliciting contented purrs. The reason may be due to some early socialization experiences with people, a genetic disposition, sensitivity to overstimulation or a sense of feeling threatened if petted for too long a time, says Wright.

To prevent such attacks, learn the pre-attack signals.  Typically, the cat will seem restless and start to knead with his paws or drool, twitch his tail, flick his ears, or push his whiskers forward in front of his mouth.  Cats are farsighted and dont see what they bite, but they can use their touch-sensitive whiskers to direct their mouth to your hand. Before this happens, remove your hand and let the cat sit quietly or leave, advises Wright. Be sure to watch for his whiskers to relax before adding another stroke.

Other Reasons for Aggression
When cats feel cornered or threatened, they may attack. Although we can sometimes recognize the source of their fear, such as other animals or children cornering them, cats that feel they have no escape are particularly prone to attack. Timid cats, for example, may feel threatened by sudden noise or movements. Cats that have recently been traumatized or that have been physically punished may live in a state of fear and have learned to be fearful – for example, of men or children – and be more prone to attack. Again, to prevent such attacks, learn the signals: The cat may crouch, flick his ears back, tuck his tail under and may roll slightly to the side.

If a cat sees an animal out the window, for example, he may feel threatened and become agitated. But because he cant attack the perceived threat directly, he may redirect his aggression to a person nearby, especially if someone comes to pet him just at the moment hes ready to lash out. What seems like an unprovoked attack to us is actually a natural response to the threat outside. A cat that is agitated from a spat with another cat in the house also may redirect his aggression to a person.

Another trigger of feline aggression is simply pain and illness, which cats are masters at masking.  An injured cat or a cat with arthritis or a toothache, for example, will be irritable and could scratch or bite if touched.  Although less common, sudden aggressive behavior also can be the result of a tumor, rabies,  toxoplasmosis or other serious medical problems.

Cats also exhibit fear-based aggression when they are scared, such as at the veterinarians office or when being brushed or forced to swallow a pill.

Preventing Feline Aggression
If the aggression is inhibited so that any bites or scratches are gentle rather than hurtful, you might excuse such attacks as play, especially if your cat is young, says Wright.  But if your cat is consistently aggressive or becomes suddenly aggressive, he should be checked out by a veterinarian to make sure your cat isnt suffering from any medical illness. If you have a male cat, neutering can dramatically reduce its aggressive behaviors.

One strategy to prevent surprise attacks is to put a bell on your cats collar; that way you know when your cat may be lurking.  Then learn the signals of an imminent attack: Typically, a cat that is preparing to attack will first crouch and be very still and flick its ears.

To avoid becoming your cats next victim of play aggression, give your cat plenty of playtimes with toys or stuffed socks to entertain him, but dont use your hands or feet.  Make sure the cat has plenty of interesting toys when youre not home.

Good toys that might mimic a moving prey or intriguing environment are empty spools of thread, toys that dangle or roll and open bags that your cat can explore.

Also consider whether the cat might be under stress, either from changes in the environment or new people in the house.

Anytime you notice any signs of attack, distract your cat by pulling out a toy or making a loud and sudden noise, such as with a whistle, clap, pennies in a can, a bike horn, stomping the foot or dropping a pile of books.  Redirect his attack to a moving prey by tossing one of his favorite small toys in a direction in front of him and away from you.  He should learn to attack the moving toy while you remain motionless and less interesting, says Wright.  Never hit or punish the cat; that will only make him fearful and potentially more aggressive. Once you have created a distraction, leave the room and ignore the cat until you believe that hes calm again.

Neutering Can Help
To prevent aggression in the long term, you should neuter your cat. Be sure to exercise your cat for at least 10 minutes, twice a day, with catnip toys, dangling yarn and other chase toys (but never leave your cat alone with any yarn or string because swallowing these items can be fatal). Provide your cat with an appealing scratching post and a good seat by a window with a bird feeder.

If the aggression persists and the veterinarian can detect no medical roots of the problem, consider an animal behavior specialist. Some cats are aggressive because they are attempting to maintain dominance and control or never learned to inhibit their aggressive tendencies from their littermates. A professional can help family members reward increasingly tolerant behavior.