Fleas are tiny blood-sucking parasites that can spread disease to your cat and to you and your family. They’ve evolved over millions of years—they spread the bubonic plague that killed millions of people in the Middle Ages—and they’re not going away any time soon. They still carry plague today, but also parasitic larvae that infect human skin and eyes, rickettsial bacteria that cause fever and systemic illness, and Bartonella, the bacteria that causes cat-scratch fever in people.

Cats get tapeworms (Dipylidium caninum) from fleas swallowed while grooming. Your first clue that your cat has tapeworms is usually seeing rice-like segments in the hair around the cat’s anus, in the cat’s feces, or left behind in your bed where your cat sleeps. These are individual segments of the huge worm, that can grow to 18 inches long (or more!) in your cat’s intestines. As if this isn’t bad enough, if you accidentally ingest a flea, you could end up with your own lovely, long tapeworm to contend with.

Fleas suck a lot of blood. In severe infestations, they can consume enough to cause life-threatening anemia, especially in kittens and geriatric cats. This preventable situation often requires intensive veterinary intervention, including blood transfusions.

As far as ticks go, cats rarely suffer from Lyme disease, even if bitten by a tick infected with its causative bacteria (Borrelia burgdorferi). There are, however, other tick-borne red blood cell parasites that can cause disease in cats, including the hemobartonella and  tularemia bacterial species. Of particular concern to cats: feline cytauxzoonosis, a protozoal parasite of the red blood cells that is transmitted primarily by the Lone Star tick,  which can be found in most of the United States. Lethargy, lack of appetite, and fever are early signs of this disease, which usually has a poor response to treatment and is often fatal.

And, once an undetected tick is finished feeding, it drops off into the surrounding environment, which may well be your home.

Assuming that you have no current flea problem (see sidebar about eliminating a flea infestation), we’re going to move on to prevention. The goal of prevention is to keep your cat from inadvertently picking up even a few fleas, which can rapidly turn into hundreds of thousands of fleas in the home.

While your indoor cat is not as vulnerable to flea infestation as free-roaming neighbor cats are, it is certainly possible for him to be infested.  You may bring a flea in on your sock or pant leg. A friend visiting from a flea-infested home could do the same. If you have dogs, even if they are treated with flea preventatives, they could carry them in. If you live in an apartment complex, fleas can travel from door to door and floor to floor.

Flea and tick prevention in cats comes down to the many safe and effective commercial products available. Which you choose may depend on whether your cat is allowed outdoors. While we will discuss a few of the most popular products here, you can visit the Companion Animal Parasite Council’s website, capcvet.org, and click on the Quick Product Reference Guide at the top of the screen for an exhaustive list of FDA- and EPA-approved flea and tick preventatives for cats.

The mainstays of flea/tick prevention in cats are topical products, oral tablets, and a prescription collar.  The most popular products are the topicals (especially the one that lasts for three months) and the collar.

Comfortis (Elanco), with the active ingredient spinosad, is a monthly chewable tablet for cats that are at least 14 weeks of age and 2 pounds in body weight. It kills fleas, and reported occasional side effects include lethargy, vomiting, and diarrhea.

Credelio (also from Elanco), with the active ingredient lotilaner, is a monthly chewable tablet for cats 8 weeks of age and older and greater than 2 pounds in body weight. It kills fleas and is labeled for prevention of black-legged (deer) ticks in cats 6 months of age and older that weigh at least 2 pounds. Lotilaner belongs to the isoxazoline class of drugs, which has occasionally been associated with neurologic side effects, so caution is advised in cats with neurologic disorders. Vomiting is the main other side effect.

Among the topicals for flea prevention, the Advantage products (Bayer), with their active ingredient imidacloprid, are popular. The only disadvantage is that they don’t kill ticks, which must be considered when choosing a product for cats who go outdoors. All Advantage products kill fleas.

Advantage II includes pyriproxyfen, which is an insect growth regulator that helps knock down current environmental flea populations and prevent new ones from starting by targeting the eggs and larval stages. 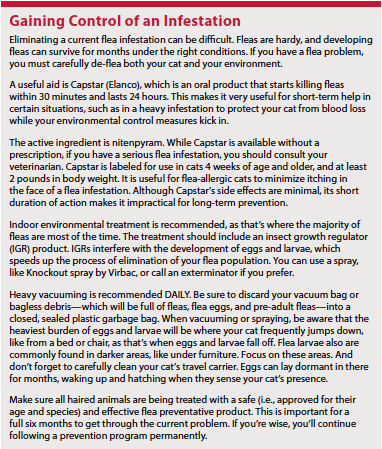 Bravecto (Merck), active ingredient fluralaner, has become a popular topical preventative among cat owners because of its long duration of action and because it also prevents tick infestations. Fluralaner is an isoxazoline, so you should use it with caution in cats with neurologic disorders. Other side effects are minimal. It kills fleas and black-legged (deer) ticks for 12 weeks, but it’s only effective against Dermacentor ticks for eight weeks.

Revolution (Zoetis), active ingredient selamectin, is approved for cats 8 weeks of age and older. In addition to killing fleas, it kills and prevents ear mites, and treats and prevents both roundworm and hookworm (intestinal parasites) infections. You can bump up a notch to Revolution Plus, which adds sarolaner, an isoxazoline, to kill ticks. However, the same caution regarding neurologic disorders applies.

Finally, the prescription flea/tick preventative collar Seresto (Bayer), with active ingredients flumethrin and imidacloprid, is labeled for cats over 8 months of age and kills fleas and ticks for 8 months. The active ingredients are not absorbed systemically (testing showed no detectable amounts in blood or tissue), but rather sit in your cat’s natural skin oils, with sustained-release technology releasing just enough ingredient every day. While the Seresto collar got some bad press in 2021 with unsubstantiated questions regarding its safety, the millions of collars sold and in use since its release speaks volumes about its relative safety and efficacy. Side effects include hair loss and/or skin irritation at the collar site.

Preventing fleas and ticks on cats makes good sense. Perhaps the best argument for flea prevention for indoor cats is that fleas cause diseases, both human and feline. This makes the big question not why would you, but why wouldn’t you use flea/tick preventative in your cat. The prevention of flea and tick infestations is less expensive, uncomfortable, and inconvenient than the cost and headache of treatment