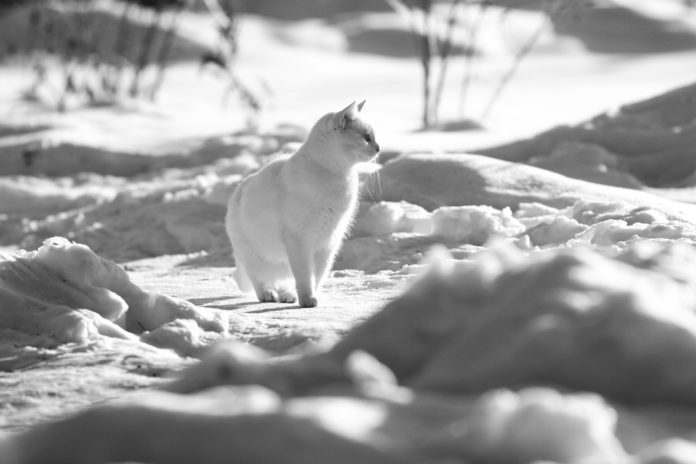 Cats whose breed developed in frigid areas of the world are likely to tolerate cold weather better than cats whose origins can be traced to more temperate regions. But even the fattest, furriest Maine coon will have only a slight edge over a trim, thin-coated Siamese when it comes to prolonged exposure to the biting winds, ice, snow and sleet that come with winter.

Indeed, any cat left outside for extended periods of time when the temperature is below freezing — not to mention any poor creature who happens to tumble into an ice-cold pond — will be at risk for a potentially deadly drop in body temperature.

The chances that this condition — called hypothermia — will prove fatal depend largely upon the animal’s age, overall physical condition and ability to regulate body temperature, says Gretchen Schoeffler, DVM, DACVECC, chief of emergency and critical care services at the Cornell University Hospital for Animals. The prognosis may be especially poor for kittens, elderly cats and those who have sustained an injury such as a broken limb, she says.

Moreover, certain disease conditions, such as hypothyroidism, can also interfere with a cat’s ability to maintain an appropriate body temperature or to restore it to normal after it suddenly plummets.

Mild, Moderate, Severe. A cat’s normal temperature, taken rectally, ranges between 100 and 102 degrees. According to Dr. Schoeffler, hypothermia may be defined as any decrease in body temperature to a level below 100 degrees Fahrenheit. The severity of the condition is ranked in three categories:
– Mild is between 90 and 99 degrees.
– Moderate is between 82 and 90 degrees.
– Severe is lower than 82 degrees.

Most cats can tolerate a temperature drop of five or six degrees (mild hypothermia) for a short period of time without serious or lasting damage. If the decline persists, however, the animal’s oxygen requirements will decrease and its blood circulation will decline correspondingly. If untreated, the decreased flow of oxygenated blood will eventually inhibit the cat’s metabolic functioning and will result in progressively severe and widespread damage to the tissues of its internal organs.

Meanwhile, his blood pressure will drop, his heart rate will slow, and the cat will be at risk for cardiac arrest. The surface of his skin will be noticeably cold to the touch. If low body temperature is suspected, the owner should place a bare hand on the animal’s groin — the point at which the hind legs meet the torso. If the skin feels cold, the animal’s temperature should be taken with a rectal thermometer — a device that all cat owners should have on hand. “In extreme cases,” says Dr. Schoeffler, “the temperature may be so low that it won’t even register on a standard thermometer.”All cases of suspected hypothermia need prompt treatment, regardless of whether the condition is thought to be mild, moderate or severe.

Warming Up. Treatment in all cases of hypothermia entails efforts to warm the cat. If he has very mild hypothermia, he should simply be confined to a warm indoor area and covered loosely with blankets. This will stop further heat loss and allow his body to reheat naturally and gradually. “If the cat is responsive to treatment,” Dr. Schoeffler, “this is probably not an emergency situation.”

However, if the cat’s temperature falls below 97 degrees, rewarming can be considerably more complicated. In general, a cat experiencing significant hypothermia should be wrapped in towels that have been warmed in a clothes dryer, and he should then be rushed to a veterinary clinic, says Dr. Schoeffler.Any cat experiencing severe hypothermia should receive emergency veterinary care. This is likely to require internal as well as external warming techniques, such as warm water enemas, warm intravenous fluid therapy, oxygen support and constant monitoring of heart rate, blood pressure and respiration. The treatment’s success will depend on a wide variety of factors, such as the cat’s body temperature at the time that treatment is initiated, the length of time that he has been exposed to frigid temperatures, whether he was wet or dry when the condition was discovered, whether he has lost consciousness and his general health status and ability to heal naturally.

To lessen the risk of hypothermia, owners should avoid allowing their cats to remain outdoors during cold weather, especially at night when temperatures tend to plummet, Dr. Schoeffler says. “By minimizing or carefully supervising your cat’s outdoor experience, you are likely to increase his lifespan, giving you more time to enjoy your special feline companion.”