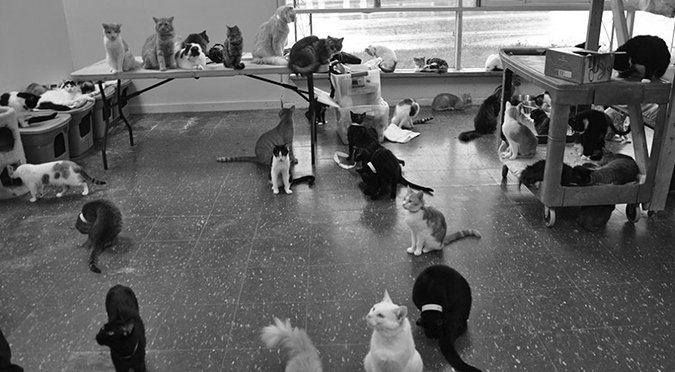 Can you identify the animal hoarder in your community? Is she the neighbor who has cats gathering in her yard? Perhaps it’s the quiet man who keeps his window shades closed? Or an outgoing community leader? How can you determine the difference between an animal hoarder and someone who responsibly cares for multiple pets?

The majority of hoarders are women, and the most common animal victims are cats, with dogs second. However, animal hoarders come in all income levels and ages. While they were believed to have an obsessive-compulsive basis, the American Psychological Association suggests that hoarders suffer attachment disorders, paranoia and depression.

As director of the Maddie’s Shelter Medicine Program at Cornell University College of Veterinary Medicine, Elizabeth Berliner, DVM, MA, ABVP, has participated in more than a dozen hoarding investigations and says, “Typically, animal hoarders do not recognize that they’re failing to provide adequate care, and they may not even recognize death.”

Each year, between 900 and 2,000 new cases of animal hoarding impacting as many as 250,000 animals are reported in the U. S., with cases doubling in the past four years, according to the Animal League Defense Fund. Experts credit the increase to greater public awareness and wider cooperation by law enforcement, humane societies, social services and mental health agencies.

Identifying an animal hoarder can be difficult because some isolate themselves, while others may be viewed as champions of homeless pets. Some tend to be overwhelmed by a large number of animals but often will ask for help. Others see themselves as rescuers, but fail to recognize their failure to provide adequate care. They are resistant to help, often hostile to authorities, and will undermine attempts to improve the situation. Still others are exploit hoarders, collecting animals to breed and sell them.

Randy Lockwood, Ph.D., senior vice president for Anti-Cruelty Initiatives and Legislative Services for the American Society for the Prevention of Cruelty to Animals, has been involved in animal hoarding for more than 30 years. “I’ve found that hoarding cases tend to be an interesting but strange juxtaposition of people thinking they are helping animals, but in actuality, are killing them with kindness.”

As it turns out, animal hoarding is a complex mental disorder challenging to diagnose and treat, and difficult to stop due to a nearly 100 percent recidivism rate. Professionals from various agencies are increasingly sharing information about hoarding, Dr. Lockwood says. “This is critical because animal hoarders can be mobile, and if they feel threatened, they often move to a neighboring town or the next state. We are much better at sharing information when we hear that a hoarder has moved.”

The big difference between OCD and hoarding is the level of insight in the individual. “People with OCD perform certain compulsive rituals that they are often aware of and uncomfortable with and OCD is relatively treatable,” Dr. Lockwood says. “However, a prime characteristic of a hoarder is the lack of insight. These are people who otherwise function at high levels and can be highly educated, but don’t seem to realize the harm they are doing to animals.”

When you go into a hoarder’s home and see the clutter and presence of dead animals, you wonder why they can’t see it or smell it, Dr. Lockwood says. “Denial is a big part of this condition. You see the conflict of a person wanting to care for animals, but the animals in their care are dying and the only way for this person to reconcile this is denial.”

Far more evident is the medical and emotional toll on cats and other animals. “Last year, we were part of a team that investigated a hoarding case in a single-wide trailer,” Dr. Berliner says. “It was shocking. The floors were soaked with fecal matter and the air was unbreathable. We wore masks, rubber boots, other personal protective gear. While it is hard to fathom how a person can live in this environment, what is more striking was that these poor animals had no choice.”

Specifically, cats rescued from hoarding situations often suffer from one or more of these medical conditions, Dr. Berliner says:

“Cats in these hoarding situations incur diseases of neglect and poor husbandry,” says Dr. Berliner. “Sadly, some animals we find are dead. Others are in such bad condition that they need to be euthanized. And those we are able to save are usually under socialized. They may be socialized toward other animals, but not to people. They can be hard to re-home.”

Individuals who adopt a cat who has been hoarded need to have realistic expectations about their level of interaction with them. “Shelters need to be sure the people who adopt them know their situations and are committed to keeping them physically and behaviorally healthy,” Dr. Berliner says. “We can sometimes help these animals overcome their socialization issues and fears of people — or we need to give them the space they require to live a quality life in whatever setting we determine to be more appropriate.”

Animal hoarding task forces are being created at community and statewide levels. Mental illness plays a big role, so criminal prosecution is not always the most effective approach, Dr. Berliner says. “When animal hoarders are prosecuted, it is usually under anti-cruelty statutes.”

Many communities are providing more of a “harm reduction” approach by offering assistance to animal hoarders with a limited number of pets who are carefully managed and monitored over the long-term, Dr. Berliner says. “This requires cooperation between human health providers, housing services and humane investigation units to be successful and guarantee that the animals are provided proper care and kept to a reasonable number.”

As part of their training, veterinary students at Cornell’s Shelter Medicine Program participate in medical teams to treat and rescue animals in hoarding cases. In November 2015, Dr. Elizabeth Berliner, Director of Maddie’s Shelter Medicine at Cornell, and her students worked with the SPCA of Tompkins County and other agencies in Newfield, N.Y., where three animal remains were found, and 28 dogs, cats, and small mammals were found inside a single-wide trailer.

The Cornell team worked closely with SPCA officials and provided triage, documentation and veterinary management of the animals in this case. Five years earlier, the owners had been found guilty of hoarding 100 animals in similar circumstances in Caroline, NY.

“We can use humane traps for under-socialized cats,” Dr. Berliner says. “We set the humane traps in the home and then return within hours to retrieve the cats inside these traps. The use of nets is not successful on these cats as many tend to be feral, and we absolutely do not want to endanger the people retrieving the animals. It takes a team and we are fortunate to have this collaboration between the college and the SPCA in our community.”

Don’t Try to Solve the Problem on Your Own

Here are signs that may indicate a person is an animal hoarder, according to the Hoarding of Animals Research Consortium from Tufts Cummings School of Veterinary Medicine, which gathered early research on the subject:

If you suspect a person is hoarding animals, contact your local animal humane investigator or law enforcement agency. “It takes someone calling attention to the problem to get it solved,” says Elizabeth Berliner, DVM, MA, ABVP, director of the shelter program at Cornell. “Do not try to solve the problem on your own because it is very complex and requires concerted efforts among various agencies.”