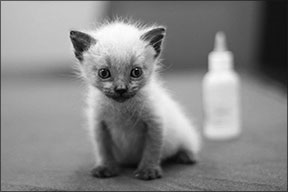 Volunteers at an animal adoption center in Los Angeles are keeping kittens alive with one simple act of kindness. They’re feeding newborns in two-hour shifts around the clock. They view their effort as crucial: Among 13,000 healthy or treatable pets euthanized at Los Angeles City shelters last year, more than 6,000 were neonatal — or newborn — kittens.

The volunteers’ work is part of the Best Friends Animal Society Adoption Center’s No-Kill Los Angeles initiative. The goal is to save 1,800 lives this year. Nearly 800 kittens and 49 nursing mothers have been spared so far.

The kittens — some weighing only 8½ ounces — are often abandoned or turned into shelters with little hope of thriving and being adopted until the neonatal nursery opened in February, the society says. With the help of the No-Kill Los Angeles coalition and Los Angeles Animal Services, “We have made significant inroads into saving the lives of these helpless kittens,” says Marc Peralta, Executive Director of Best Friends Animal Society Los Angeles. “There just wasn’t a safety net in place for these cats or enough resources to provide round-the-clock care before.”

Says Nicole Swartzlander, Neonate Program Coordinator for the center, based in the city’s Mission Hills area, “Without the volunteers, we couldn’t save the numbers we have. They make the place run.”

One reason for the growing cat population in Los Angeles and other cities nationwide is the length of the feline pregnancy. It lasts a scant 9 weeks, and cats can become pregnant again in only a month.

That’s why spaying and neutering are crucial, Swartzlander says. The urban legend that two intact cats and their offspring can result in 420,000 cats in seven years was discredited several years ago. New estimates put the figure at 500 to 5,000 cats. In any event, Swartzlander says, surrounded by nearly 100 meowing kittens in cages at the neonatal nursery, “If our communities would make spay/neuter a priority, we wouldn’t have all these kittens.” ❖