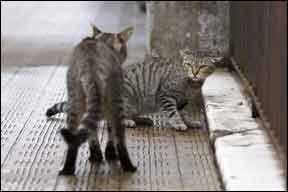 For several days, your cat has been acting oddly, lolling about the house, uncharacteristically lethargic, off his food and seemingly depressed. Then one evening, while stroking his back to comfort the mysteriously dispirited animal, you notice a smallish but alarming

lump just to the side of his tail. Although you touch the lump ever so gently, he reacts with a howl, hisses, leaps from your lap and scurries to a dark corner.

The lump you discovered is quite possibly an abscess, and although your touching it caused the poor animal intolerable discomfort, its a good thing that you spotted it. The sensitive swelling may indicate that the cat has an infection of some sort, which would explain his sluggish behavior of late, and prompt veterinary care is in order.

Characteristics. An abscess is a localized collection of pus, a sticky, smelly, yellowish fluid that forms at the site of an infection. Although pus typically contains a certain amount of cellular debris and dead tissue, it is composed mainly of white blood cells that have been summoned by an infected animals immune system to combat invading bacteria or other microorganisms.

Cats, just like humans, dogs and other creatures, can develop a variety of lumps and bumps on their skin – cysts, tumors, pimples and so forth – but abscesses have their own distinctive characteristics, notes William Miller, VMD, medical director at Cornell Universitys Companion Animal Hospital. “Because an abscess is filled with pus,” he says, “it will be inflamed, warm and tender. Tumors are not usually like that, and pimples are merely superficial eruptions, affecting the outer layer of skin and minuscule by comparison to an abscess.”

External and Internal. An abscess may develop at the site of a penetrating wound – if a cat steps on a thorn, a wood sliver or a piece of glass, for example. But abscess-producing infections in cats usually result from bites from other cats, since the bacteria that cause infection are normal inhabitants of the feline mouth and are easily passed along when one cats sharp teeth puncture another cats tender flesh.

If an abscess is to develop, it will usually do so about three days after a cat has been bitten or otherwise wounded. It takes that long, says Dr. Miller, for the microorganisms that entered the cats body to proliferate and for the animals white blood cells to respond in great numbers. A well-developed abscess will appear as a dome-shaped mass on the skin surface, typically a half-inch to an inch in diameter and either firm or slightly mushy to the touch.

Although abscesses may appear anywhere on an animals body, they are most frequently located on the limbs, face, base of the tail and back. An owner that frequently interacts with a cat – or at least observes it regularly – is apt to see the alarming lump. In longhaired cats, however, the skin eruption may remain hidden from view until it has progressed to an advanced stage.

The size of an external abscess depends on the location of the infection-causing wound and the amount of tissue that is affected. For example, says Dr. Miller, “If a bite wound is on the face, it cant get awfully big because of the bony prominences and the thin skin. The abscess will usually rupture after a few days and discharge pus to the surface. But if a cat has an abscess on the chest area, where there is a lot of loose skin, it can get bigger and bigger. An abscess the size of your fist wouldnt be unusual there.”

Treating an Abscess. It is possible for an owner to treat a cats abscess at home, although Dr. Miller strongly discourages this since, he says, “the probability of the treatments being completely successful is pretty slim.” Home care, which should only be undertaken, if at all, for a small and clearly demarcated abscess, would involve carefully clipping the fur around the affected area, cleaning the skin adjacent to it, and hot-packing the abscess every two hours or so, using a clean towel soaked in a mixture of water and salt.

But Dr. Miller instead recommends that treating an abscess of any size should be left to a veterinarian. This will ensure that the injured cat receives a thorough presurgical workup; an expertly executed lancing, draining, and cleansing of the abscess and underlying tissue; and appropriate postsurgical treatment with systemic antibiotics, “usually,” says Dr. Miller, “one of the penicillins.”

Proper treatment of an abscess centers on a surgical procedure in which the veterinarian uses a scalpel to make a small incision into the mass and applies pressure to drain the pus that has collected within it. Prior to this procedure, however, an ailing cat will undergo a number of tests. First, the veterinarian will take the cats temperature; a high reading (above 102.5o F) indicates that the animals body is responding to the infection. Likewise, a blood test showing a high white cell count is a good sign, indicating that the cat is mounting an attack against the bacteria.

If there is any indication that the infection has caused bone damage or, in older cats, any harm to the kidneys, liver or other organs, a complete test of the animals blood chemistry will be performed to determine the extent of the damage.

Testing Is Possible. And the cat – especially if its primarily an outdoor cat – may be tested for the presence of feline leukemia virus (FeLV), feline immunodeficiency virus (FIV) and other life-threatening organisms. Surgically treating an abscess will usually take from 15 minutes to a half-hour. To have a small abscess lanced, a cat may not need to be fully anesthetized – sedation and local anesthesia will suffice. For larger abscesses, the cat may have to be totally anesthetized for the duration of the procedure.

If an affected cat is old or very sick with an unrelated disease, it may have to remain at the veterinary clinic for a few days to receive intravenous fluids and special antibiotics. In some cases, repeated draining of the wound may be required to make sure that any remaining pus continues to flow out of it. The majority of abscesses, however, can be treated during a single clinic visit, with full recovery occurring within just a few days.