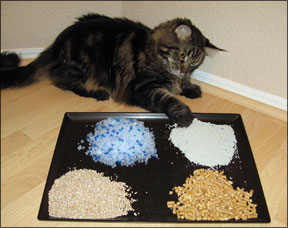 Within the past several years, a number of products have entered the cat litter market as “alternative” litters. The chief claim of many of these litters is that they are made from plant-based or

recycled materials, as opposed to clay, the basis of “traditional” kitty litters.

As with most products or groups of products, there are both advantages and disadvantages to using alternative cat litters. One advantage that makers of these specialty litters feel appeals to cat owners with environmental concerns is that alternative litters – because they are made of biodegradable substances – present less strain on landfills. Some brands are even marketed as being “compostable” and/or burnable.

Additionally, alternative litters are often give off little or no dust, which could be a benefit to a cat with upper-respiratory issues. “Our general advice to owners of asthmatic cats is to limit environmental exposure to potential irritants of all kinds,” says Carolyn McDaniel, VMD, a consultant with the Cornell Feline Health Center. “This includes aerosol cleaning agents, perfumes, cigarette smoke … and dusty cat litter.”

Another benefit of some alternative cat litters is the lack of artificial fragrances or harsh chemical additives. Dyes and deodorizers found in some cat litters have been linked with contact allergies in cats, says Dr. McDaniel, noting that even though allergic dermatitis is fairly common in the cat and it can be difficult to sort out a cause, “Any cat with dermatitis lesions affecting the paws should have the litter type evaluated for possible allergies.”

One of the biggest potential downsides to using an alternative kitty litter involves owner convenience: Not all of them are clumpable or scoopable. Clumpable/scoopable clay litters first appeared on the market in the 1980s and have remained a popular choice among cat owners. In fact, 70 percent of cat litters purchased are clumpable and scoopable, according to the American Pet Product Manufacturers Associations 2007/2008 National Pet Owners Survey.

Cat litters that dont clump must be emptied and replaced more often to keep odors under control. The inability to scoop urine clumps from certain alternative litters may mean that owners will have to change the litter more frequently to avoid undesirable odors (and could incur a higher cost by simply using more litter, more often).

New litters are appearing on (and disappearing from) the cat market on a regular basis. Some varieties are offered through national pet store chains, while others are available regionally or through Web-based companies. The following is a current list of types of alternative litters, categorized by their primary ingredients, and some product information as provided by manufacturers.

Of the alternative kitty litters appearing on the market, the APPMAs study shows that those made from wood pulp or shavings are the most popular – five percent of all litters purchased were made from pine or other chips. According to the manufacturers, pine-based varieties are made from recycled shavings, which are kiln dried to remove aromatic oils, and then compressed into

pellets. Feces can be scooped out, while urine is absorbed by the pellets, which swell on contact. Moistened pellets then dissolve into a wet wood dust. (One product, Feline Pine Scoop Cat Litter creates clumps by adding guar bean to the pine pellets.)

These litters are made primarily from wheat, oats or corn. According to manufacturers, odors are eliminated by “natural enzymes” contained in the grains. And, if your cat ingests these products, manufacturers say the litter will pass safely through the cats system.

Other benefits of these grain-based kitty litters are that they are clumpable, and some are flushable. (Note: A 2006 California law recommends disposing of cat litter in landfills rather than flushing it, in order to limit contamination of sea-otter habitat with harmful Toxoplasma gondii.)

Kitty litters made from recycled paper come in both pellet and granule forms. Recycled paper products tend not to cling to cats’ paws, making them a popular choice for kittens, recently declawed cats and other post-operative care, say manufacturers. Many of the products also claim to be safe to incinerate, compost and flush with septic systems.

If youre interested in switching over to an alternative type of kitty litter, Dr. McDaniel suggests giving you cat(s) a choice: “The best idea may be to provide a smorgasbord of litter types in a number of boxes to find out what a particular cats favorite is.”

Another method is to put roughly one inch of the new litter on the bottom of the cats litter pan and top this with three inches of the cats regular litter. At every litter change, decrease the amount of regular litter covering the new, alternative litter until the use of the old litter has been phased out completely.

Of course, no matter what the possible health benefits might be with an alternative litter or how attractive the pricing, a litter is only as good as the use it gets. The trick is to find a litter that both you and your cat will like.