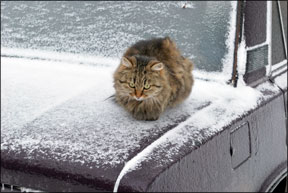 As you cope with the frigid temperatures that come with winter, you may make it a habit of adding antifreeze to the radiator of your automobile. This substance-a bright green, syrupy chemical called ethylene glycol-serves to lower the freezing point of water

and will certainly help to keep your car running smoothly throughout the colder months. Keep in mind, however, that ethylene glycol, if ingested by your cat, can prove deadly within a matter of days if the animal does not undergo prompt and expert veterinary treatment to get it out of its system.

According to Karyn Bischoff, DVM, chief toxicologist at Cornell Universitys College of Veterinary Medicine, ingesting just a tiny amount of antifreeze-less than a teaspoonful-can set off a chain of metabolic events within a cats body that will inevitably prove fatal if it is not recognized and treated within a few hours of ingestion. In some cases, a thirsty cat will lap up a puddle of the sweet-tasting substance from your driveway or the floor of your garage. More commonly, a cat will happen to walk through spilled antifreeze and subsequently swallow it while grooming its paws.

Rapid Progression. Antifreeze toxicicosis occurs essentially in two distinct phases, says Dr. Bischoff. In the first phase, a cat that has just ingested antifreeze will appear to be intoxicated, as if it has been imbibing alcohol. The cat may appear to be disoriented and poorly coordinated, confused, staggering about, and stumbling drunkenly as the ethylene glycol is being absorbed from its gastrointestinal system into its bloodstream. Then, after an hour or so, this inebriated behavior will cease and the cat may appear to be sobering up. If the cat receives emergency medical treatment to remove the toxic chemical from its system at this point, it will likely survive, says Dr. Bischoff.

Unfortunately, she points out, an owner may not notice the animals bizarre behavior or may casually dismiss it as transient and of no consequence. In that case, the prognosis for recovery becomes progressively worse by the hour, since the second phase of toxicity is already underway. “Basically,” she says, “the ethylene glycol, in itself, is not very poisonous. Its what the body does to the substance as its being metabolized that makes it toxic.”

In this phase, the ethylene glycol – now fully absorbed into the bloodstream – starts being metabolized in the liver, an intermediate process in which potentially toxic substances (metabolites) are yielded from the chemical. Within about 12 hours of ingestion, the proliferation of these metabolites dangerously increases the level of acidity in the cats bodily fluids. More important, says Dr. Bischoff, the metabolic process will lead to the development of calcium oxalate crystals, which block the minute tubular structures that normally allow the flow of fluids through the kidneys. If unrelieved, these crystals will cause life-threatening renal failure in an untreated cat within 20 or 30 hours after ingestion.

Prompt Treatment. A blood test by a veterinarian can quickly reveal the presence of the substance in a cats system, and emergency treatment will begin immediately. Therapy focuses on interrupting the process in which ethylene glycol is being metabolized by an enzyme called alcohol dehydrogenase. One way of achieving this is to get the afflicted cat totally drunk-virtually comatose-on pure alcohol (ethanol) which is given intravenously.

“The alcohol dehydrogenase is then kept busy metabolizing the ethanol instead of the antifreeze,” says Dr. Bischoff, “and the ethylene glycol will then be excreted intact by the animals kidneys.” This is not an easy treatment, she notes, since the patient must be kept immobile and intoxicated for up to 36 hours, which can be severely trying for a geriatric cat or one whose overall health is already compromised.

Constant monitoring is important during this process for the safety and welfare of the patient. (Dr. Bischoff notes that substances other than pure alcohol are now available to divert the activity of alcohol dehydrogenase. Although they are more expensive, she points out, they are much safer.)

The prospect for recovery depends ultimately on how soon the poisoning is diagnosed and treatment is initiated, says Dr. Bischoff. Unfortunately, most cases of antifreeze toxicity will go unnoticed during the initial (drunken) phase. The next time that the cat appears to be ill will be at 12 hours or so after ingestion and then again at 24 or 30 hours, when the kidney deterioration is well underway. At this point, the prognosis is likely to be poor.

Since prompt initiation of treatment is of utmost importance, Dr. Bischoff urges cat owners not to ignore the earliest signs of ethylene glycol poisoning. “If your animal is behaving as if it is drunk,” she says, “contact your veterinary clinic immediately. You may be told how to induce vomiting – but more likely you will be instructed to rush the animal to the clinic without delay.”

Averting Danger. To protect a cat from ethylene glycol poisoning, Dr. Karyn Bischoff urges owners to thoroughly mop up and flush any antifreeze that has spilled on a garage floor or driveway. “Keep the antifreeze in containers that are sealed, labeled and stored where your animal cant get at them,” she advises. “Avoid letting the animal roam free around the neighborhood or countryside. If you dont know where it is, you have no way of knowing what its getting into.”