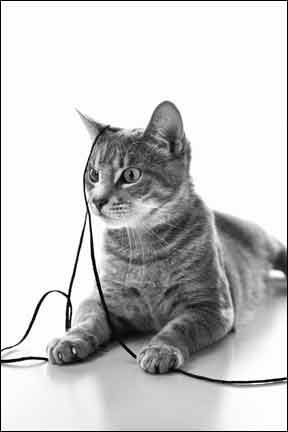 Our cats don’t live in a protective bubble, and their feline curiosity can create potential choking hazards. Some cats can start to choke if they gobble large amounts of dry food too quickly or accidentally swallow string.

Witnessing your cat in a wide-legged stance, coughing, gasping for breath can be frightening. That’s why it’s vital to know the proper response to keep him safe.

“Cats can choke on kibble or toys, but most commonly, they come to the emergency room choking on a foreign object due to chewing on thread or swallowing needles,” says Dan Fletcher, DVM, Ph.D., Assistant Professor of Emergency and Critical Care at the Cornell University College of Veterinary Medicine.

Foreign Object. He offers this advice if your cat is conscious and choking: If he is breathing without difficulty, monitor him for a few minutes to see if he can dislodge the object on his own. If he can’t or is having difficulty breathing,  try to identify a foreign object by carefully opening his mouth by grasping the top of his muzzle with one hand and the lower jaw with the other hand. You must be very cautious; even the sweetest cat can bite or scratch when stressed, so if he struggles or you’re not immediately able to identify a foreign object, stop and proceed directly to the nearest veterinarian.

If you can easily see the object, remove it. However, if the object appears to be string, yarn or tinsel, do not attempt to pull it from your cat’s mouth. “If a linear object has been swallowed, it may have trailed down the intestinal tract,” Dr. Fletcher says. “Pulling these objects can cause the intestines to tear or rupture, leading to life-threatening infection in the abdomen. These animals should be taken to the nearest veterinarian immediately.”

Wheezing Sound. If the sounds your cat makes change from coughing and gagging to a gasping, wheezing sound known as a stridor, it’s a sign he’s unable to get full breaths of air. He may collapse, become unconscious and even stop breathing.

If your cat is unconscious, Dr. Fletcher recommends that you open the mouth, pull the tongue out past the canine teeth and look down the throat. If you see a foreign object such a piece of kibble, remove it with your fingers or tweezers. “But if the object is stuck and there is resistance to removal, it should not be forced out,” Dr. Fletcher says. “Regardless of whether an object is found and removed, any pet who collapses should be taken to the closest veterinary clinic, even if his condition improves.”

Call the clinic to let the staff know you’re en route so they can be ready. Because cats depend upon air movement into their lungs to cool them, they can quickly overheat if they have airway obstructions. Keep the car cool and avoid wrapping your cat in a blanket — transport him in a carrier.

The veterinarian will do an initial assessment of your cat’s airway, breathing and circulation. If your cat isn’t breathing and doesn’t have a heartbeat, cardiopulmonary resuscitation will be started to restore blood flow and deliver oxygen to vital organs.

If the obstruction is severe, your cat will be sedated and an endotracheal tube will be placed into the airway to provide air flow to the lungs. If the object has been swallowed, surgical removal may be necessary.

“Anytime a cat is choking, he should be seen by the closest available veterinarian immediately,” Dr. Fletcher says. “Apparent choking is often due to other processes such as lung or heart disease, infections, or inflammation of the airways that can impede breathing and can rapidly progress to become life threatening.”