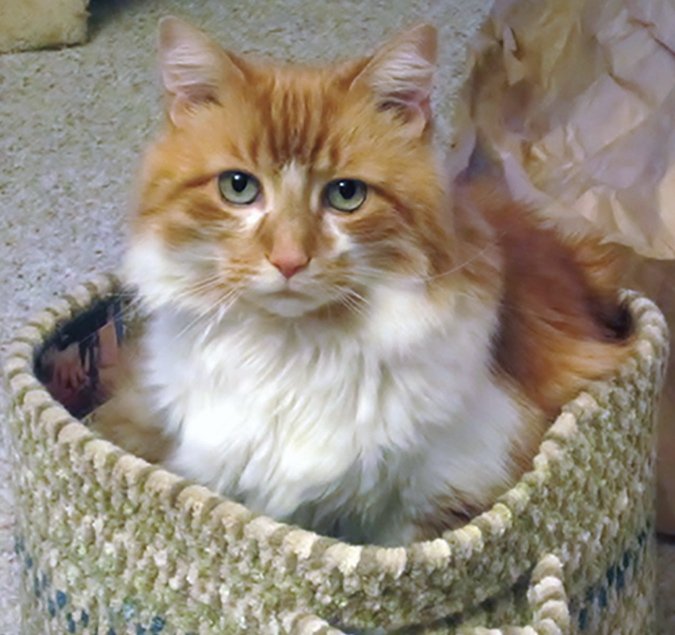 Does your cat make noises that sound nothing like a traditional meow? She’s not the only one! While purrs, hisses, and, of course, the famous “meow” are the best-known cat sounds, cats have a wide repertoire of noises they use to communicate with other cats and us.

“A chirp is given by the queen when she is returning to her kittens, perhaps to call them so they can all nurse at the same time,” says Pamela J. Perry, DVM, PhD, Behavior Resident at the New York State College of Veterinary Medicine at Cornell. This is a happy sound that indicates familiarity.

But chirps aren’t just for mother cats. “Adult cats chirp to get the owner’s attention,” says Dr. Perry. “I had a cat, Curly, who would chirp on command. Then when he really, really wanted something, he would chirp exuberantly!” (See sidebar, below.)

While chattering is cute, it isn’t quite as happy a sound as chirping. “Cats often chatter when they are watching prey through a window,” says Dr. Perry. “It appears to be hunting-related and due to excitement and frustration from not being able to get the prey.” If your cat is not an avid hunter or doesn’t have much opportunity to observe prey animals, you may never hear her chatter.

Any cat can chirp or chatter, as it’s more an individual personality trait than a breed tendency. As for noisiness in general, some breeds do stand out. “Oriental breeds certainly have a reputation for being vocal,” says Dr. Perry. “Siamese and Tonkinese cats were reported in one study to be the most vocal, whereas Persians, Maine Coon, and Ragdolls were the quietest.” So if you live in an apartment with fussy neighbors, a Siamese kitten may not be the best fit for you right now.

“Any change in behavior, including vocalization, should alert an owner to seek veterinary advice,” says Dr. Perry. “Cats may vocalize when ill, distressed, or in pain. A change in the cat’s voice also may indicate a problem in the larynx or pharynx.” Foreign objects lodged in the cat’s throat can distort her voice, as can tumors in that area of the body. And just like us, some cats cry out when in pain while others hunker down and stay very quiet, probably in a preferred hiding place where the cat feels secure.

Dr. Perry adds, “Geriatric cats often vocalize more frequently, especially at night. This may be an indication of cognitive dysfunction or other diseases,” which may require a veterinary visit to rule out causes. (See February 2018 “When Kitty Battles Dementia.”)

You can teach your cat to vocalize on command. Start by doing some reconnaissance: Find out what treats or toys she likes as a reward, and in what situations she makes the desired sound, be it a meow, mew, or chirp. When you know she is likely to make the sound, be ready to reward her. After several repetitions, she will figure out that the sound is earning her the reward and will start offering it to you intentionally. At this point, you can introduce a cue, such as “speak,” “meow,” or “chirp.”