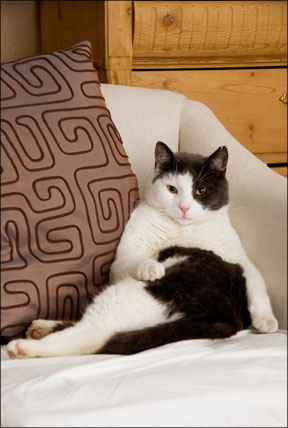 A cats health depends largely on its endocrine system, an array of small organs that manufacture chemicals called hormones and deliver them into the animals bloodstream. Once they reach their respective target destinations, hormones interact with tissues to enable bodily processes and to ensure their

effectiveness. Among the components of the endocrine system is the pancreas, and perhaps the most important function of the pancreas is the manufacture of a hormone called insulin.

After a cat has consumed fats, carbohydrates and proteins, these dietary components are broken down into a vitally necessary chemical substance called glucose – sometimes referred to as “blood sugar.” Insulin then allows the passage of the glucose from the bloodstream into the cells, where it provides the energy needed to sustain an animals bodily functions. Without the properly balanced presence of glucose in a cats cells, its health will inevitably be compromised, perhaps fatally.

A Common Disease. Diabetes mellitus is a serious disease, frequently diagnosed in cats, in which the pancreas is unable to produce sufficient amounts of insulin. The deficiency of this hormone will typically lead to the excess accumulation of glucose in a cats circulating blood and excess excretion of it in its urine. At the Cornell University Hospital for Animals, says Richard Goldstein, DVM, “We see diabetic cats every week – new cases as well as chronic, recurring cases. Its the second most common feline endocrine disorder – after hyperthyroidism – that we treat at our hospital.”

The good news, says Dr. Goldstein, an associate professor of small animal medicine at Cornell Universitys College of Veterinary Medicine, is that feline diabetes, though incurable, is eminently manageable in most cats if the condition is diagnosed early. This is especially true, he adds, in light of recent advances in treating the condition.

Two Categories. Cats may be afflicted with either of two varieties of diabetes.

In Type I diabetes, an animals body generates little or no insulin due to an insufficient number of pancreatic cells capable of producing the important hormone.

In Type II diabetes, the pancreas may produce the hormone but the bodys cells have difficulty making efficient use of it – a phenomenon called “insulin resistance.”

Cats are commonly susceptible to both forms of the disorder. “Most have Type I,” says Dr. Goldstein, “but Type II also occurs very frequently.” Also, he notes, “Some cats may be clinically diagnosed with diabetes for a while and then go through periods when they dont require insulin supplementation. But in most cases, the condition will reappear.”

Risk Factors. Male and female cats are equally susceptible to diabetes, Dr. Goldstein points out. The condition can occur in any breed and can afflict cats of any age, although it is most frequently observed in middle-aged and older animals, especially those that are obese (weighing 15 pounds or more). A cats lifestyle may increase its susceptibility to diabetes, he points out, but only to the extent that indoor cats tend toward obesity more than outdoor cats, and obesity is known to play a causative role in Type II diabetes.

During the past few years, researchers have established a strong link between the emergence of feline diabetes and the use of steroids to treat skin allergies and other disorders. Dr. Goldstein notes: “Its very common for a cat that has an underlying pancreatic pathology to develop diabetes after being treated with steroids over an extended period of time.”

In general, the prominent early signs of the disease include increased water consumption (polydipsia), increased urination (polyuria) and weight loss. It is unlikely that, in the early stages of the disease, any other indications will be observed. There will be no change in an animals excretory pattern or the consistency of its stool. If untreated, however, the signs can progress to include severe lethargy, persistent vomiting and a lethal wasting away of body tissue.

Treating Diabetes. When diabetes is suspected, a veterinary exam will aim to confirm that diagnosis and rule out other possible causes. The procedure will involve a thorough medical history and physical exam; a complete blood count and a blood chemistry panel; a urinalysis to check for the presence of glucose in the animals urine; a search for signs of possible urinary infection; blood tests to determine the concentration of blood glucose; and additional tests to exclude other significant disorders. In some cases, abdominal X-rays or ultrasound imaging will be done to evaluate the health of the pancreas and other internal organs.

Treatment of a confirmed case of feline diabetes will always entail dietary therapy aimed at maintaining a cats proper weight and minimizing the consumption of food that might disturb its blood glucose levels. “Until recently,” says Dr. Goldstein, “it was generally thought that the best diet for a diabetic cat would be a high-fiber, low-fat diet. But in the last few years, the trend has been toward a high-protein, high-fat, low-fiber diet. This seems to work better, and cat food manufacturers are now making these diets commercially available.”

New Types of Insulin. The most significant advance in diabetes treatment, however, is the development of new types of insulin. Most, though not all, diabetic cats will require injections of insulin, he explains, which must be administered daily by the owner into the scruff of the animals neck. In the past, these shots would have to be given once or twice daily. However, Dr. Goldstein explains, new types of insulin have been synthesized during the past few years that significantly reduce that burden on both patient and owner. For example, he says: “A synthetic insulin called glargine is longer acting. A lot of cats that are started on glargine and are also consuming the newer type of diet may go through extended periods in which they do not require any insulin injections at all.”