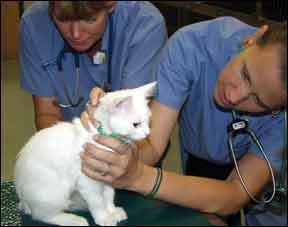 You’re nestled comfortably in your favorite chair with your cat dozing peacefully in your lap. You’re petting her gently, stroking her back. You’re happy, she’s happy — but suddenly she lets out a horrific howl and springs violently into the air with her claws out, furiously throwing her head about and trying to bite her own backside as if it had attacked her. Then the episode stops as suddenly as it began — she abruptly flops to the floor and, with a few convulsive jerks, passes out.

Within a minute or so, she comes to, yawns, stretches and trots off to her food bowl for a snack. Apparently, she’s back to normal, but you’re obviously concerned and wondering, “What the heck just happened?”

You should not take such signs lightly. Seizures may have many causes: brain injury, inflammation, tumor or degeneration; stroke; metabolic disorders; or toxicity. On the other hand, your cat may be exhibiting a disorder called feline hyperesthesia syndrome, a collection of clinical signs that in themselves are seldom life-threatening but nevertheless warrant your concern and a visit to your veterinarian.

A checkup is in order, as the diagnosis of feline hyperesthesia is one of exclusion; in other words, it is not attributable to a single underlying disease or other physical disability. The frequent occurrence of feline hyperesthesia syndrome has been associated with a wide array of serious clinical problems including inflammation or cancer of the brain, nutritional deficiencies and liver disease.

It’s in the Chemistry. Some observers believe that the syndrome represents a form of idiopathic epilepsy — that is, epilepsy with no physical cause. Others believe that it is triggered by mental problems, either resulting from an inborn deficiency or from psychosocial factors such as sexual competition with other cats, loneliness and boredom or frustration wrought by lack of physical activity.

Veterinarians generally agree, however, that feline hyperesthesia syndrome indicates the presence of neurological impairment involving brain chemistry rather than the physical structure of the nervous system. That is why it is designated as idiopathic epilepsy.

Occasional displays of the syndrome by an individual cat are common; cats who have frequently recurring events are rare. In all cases, the behavior of cats exhibiting the syndrome — also known as rolling skin syndrome, neurodermatitis and psychomotor epilepsy — is the same, although varying in duration and intensity. Never observed in a kitten, the first signs of a tendency toward the disorder appear between the ages of one and four. The signs include the development of rippling skin on the cat’s back, just above the tail; widely dilated pupils; and the cat’s habit of staring off glassy-eyed into space as if in a trance. They also include seemingly pointless outbursts of dashing madly and aimlessly about the house or yard, and attacking objects — both animate and inanimate — as if warding off an assault.

Stroking Near the Tail. Most frequently, a specific event will be triggered while the cat is experiencing what she loves most — being petted by her owner. Although occurring with no observable pattern or predictability, an episode is initiated when the cat’s lumbosacral area near the tail is stroked. For reasons not completely understood, this sets off motor activity — apparently similar to pain response — toward which the afflicted cat responds by first violently “counterattacking” the stimulus, and then suffering other motor activities resembling an epileptic episode, which can last from seconds to several minutes. The seizures are not likely to be life-threatening, although they can be dangerous if they precipitate, for example, a fall from a high place.

Since feline hyperesthesia syndrome is not a specific disease — but rather a set of signs — treatment cannot cure an afflicted cat, but merely mitigate the severity of these signs. Some cats respond well to corticosteroids. Others respond to anticonvulsant or other analgesic medications. In any case, a cat suffering repeated episodes should be taken to a veterinarian for a complete physical examination — including a neurological workup — as the first step in making the correct diagnosis and relieving the cat from this affliction.