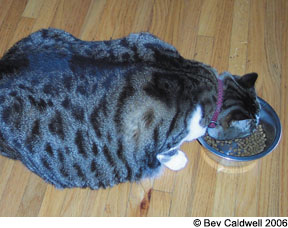 In terms of her size, shape, coloring, temperament and behavioral mannerisms, you may regard your cat Penny as a unique creature, and as far as those considerations go, she may indeed be one of a kind. But keep in mind that there are several ways in which Penny is just like the cat next door, the one that lives down the street and, for that matter, every other cat in the world.

All cats are alike, for example, in their need for a nutritionally sound and palatable daily diet. The normal feline diet must include a correctly balanced blend of vitamins, protein, minerals and fats, along with a sufficient amount of water – the latter being especially important for a cat that is routinely fed dry food.

The Greatest Threat
Consuming a complete and well-balanced diet will not, of course, protect Penny or any other cat from injury or from the onset of traumatic illness, although it is likely to supply the nutritional resources that an injured or ill animal needs in order to respond as well as possible to such an occurrence. Conversely, the lack of nutritionally complete and balanced food intake can result in a wide variety of diet-related disorders that, if ignored by a cats owner, may have lethal consequences.

With that in mind, should you start stuffing Penny with as much healthy food as she can handle? On the contrary, says Francis Kallfelz, DVM, a professor of veterinary nutrition at Cornell Universitys College of Veterinary Medicine, since uncontrolled overfeeding will inevitably lead to what has emerged in recent years as the most prevalent diet-related feline disorder of all – obesity. There is no question, he says, that this is the number one nutrition-related disorder in cats today.

Potential Risks
Due to the ready availability of nutritionally sound commercial cat foods, Dr. Kallfelz points out, owners generally dont have to worry that their animals arent consuming a complete and well-balanced diet. Nevertheless, owners should be aware of what the components of such a diet are, their functions in the feline system, and the potential risks involved in feeding a regimen that is deficient in them.

Protein is the source of certain chemical compounds called amino acids, which are necessary for building and maintaining the supporting structures in the body, such as muscles, ligaments and tendons. A cat needs about 20 different amino acids in order for its body to function properly. Half of these can be adequately synthesized within the body, but the remainder – the essential amino acids – cannot, and thus must be taken in via the diet.

Although proteins exist in plant-based foods, cats do not process them efficiently. Rather, they should take in most of their protein by consuming animal-based foods such as meat and fish. In some cases, these foods may not be sufficiently available, so dietary protein supplementation will be necessary. Common signs of protein deficiency include disturbances in skin pigmentation and a prolonged shedding of hair that results in bald patches on the head, back, abdomen and legs.

Several decades ago, says Dr. Kallfelz, a serious deficiency of an amino acid called taurine was prevalent in the feline population. Taurine deficiency was responsible for serious diseases of the heart, eyes and reproductive system. This rarely occurs today among domestic cats, however, since cat food manufacturers now supplement their products with adequate amounts of taurine.

Vitamins are water- or fat-soluble organic substances that exist naturally in plant and animal foods and are needed in small amounts for the growth and proper functioning of the feline body. As is the case with amino acids, some vitamins are produced within a cats body, while others must be consumed in the routine diet. A wide array of disorders can result from an animals inability to produce sufficient amounts of vitamins or from a lack of these substances in its food.

Vitamin deficiencies that can lead to significant feline health problems include: vitamin A deficiency, which may cause retarded growth, decline in appetite, eye infections, incoordination and brain damage; lack of vitamin B1 (thiamine), which can result in weight loss and neurologic disorders; vitamin D deficiency, which may cause bone deformity in adults and rickets in kittens, a disease marked by poorly formed, soft and easily broken bones; and vitamin E deficiency, which can cause a disorder called steatitis that may trigger a painful inflammatory response and can damage an animals body fat.

Minerals such as calcium, phosphorous, sodium, potassium, magnesium, iron, copper, zinc and iodine are essential to a cats health. They help maintain the bodys tissues, its fluid flow, and a proper balance of electrolytes (compounds that, among other things, regulate the electric charge across cell membranes).

Given the important roles that they play, minerals – just like protein and vitamins – must be adequately present in a cats system, and a dietary deficiency can have a detrimental effect on a cats health. For example, calcium is instrumental in bone and tooth development, blood clotting and many cellular functions. A deficiency of this mineral may result in bone disease, disturbances of locomotion and excessive functioning of the parathyroid gland. A magnesium deficiency can slow the growth of kittens and cause muscle weakness in adults. A cat with a potassium deficiency may become lethargic and uncoordinated. And a zinc deficiency can result in significant skin disease.

Excesses of the necessary nutritional components can also have a serious impact on a cats health, notes Dr. Kallfelz. In discussing nutrient toxicities, he says, for example: You can get a vitamin A toxicity by feeding a diet that is too high in certain types of liver, which will be reflected by the overgrowth of bone. You can get vitamin D toxicity by feeding your cat certain types of cod liver oil, which can cause high blood calcium. This, in turn, may result in very serious clinical signs, such as kidney failure and various neurologic problems.

Ongoing Research
On a much brighter note, Dr. Kallfelz observes that diet-related disorders in cats, other than obesity, are uncommon these days. The dietary deficiencies and excesses that were once very common are relatively rare today, he says, because of the scientific research that has been done over the past 40 years on feline nutritional requirements. The pet food manufacturing industry has used all of the results of that research to formulate diets that are complete and balanced.

The research is ongoing, he adds, citing, for example, current investigations into the possible relationship between the consumption of dry-type cat foods and the prevalence of type 2 diabetes in cats. At the same time, he notes that the increasing prevalence of feline diabetes is known to be directly associated with obesity. Free-choice feeding, he says, is certainly causing an increase in obesity among cats – and obesity has been convincingly linked to a decreased sensitivity to insulin. Obesity also increases the incidence of feline arthritis and cardiac disease, aggravates those conditions if they already exist, and in general decreases the quality – and the length – of a cats life.

Advice to Owners
Dr. Kallfelz offers the following advice to cat owners: Make sure youre feeding a food thats guaranteed to be complete and balanced for the life stage of your animal, and make sure youre feeding your animal the proper amount. You can find a nutritional guarantee on the label of virtually every cat food on the market today. And make sure that you dont overfeed the animal. Watch its weight. An adult cat at maintenance should be neither losing nor gaining. As long as the label carries the appropriate life-stage guarantee and is a properly formulated diet, it shouldnt make any difference whether its wet or dry food.

What about the cat that is refusing to eat and is losing weight? The problem may very well be with the cat, not the food, says Dr. Kallfelz. Its likely that the animal has a medical problem, and youd do well to have it examined by your veterinarian.