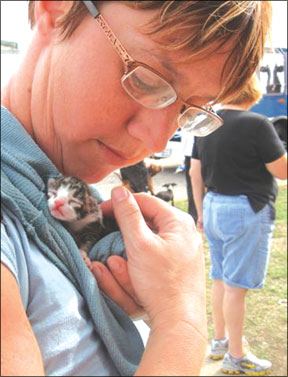 that dogs and cats from coastal shelters in danger of destruction could be moved to safety in Houston.

In addition, the Houston SPCA coordinated evacuation efforts for owners in need of crates, carriers, muzzles, leashes and other travel items necessary to safely evacuate their beloved pets with them to shelters, hotels and other temporary living arrangements.

The question remains, of course, why were so many pets left behind when owners had more than a week to prepare a safe evacuation?

Under the Pets Evacuation and Transportation Standards (PETS) Act of 2006, state and local emergency preparedness authorities were required to accommodate households with pets or service animals in their evacuation plans. “The common reasons we heard [for leaving pets behind] were, We didnt think wed be gone so long, We left food on the table, or theyd say, We thought theyd be fine,” relates Meera Nandlal, public relations manager for the Houston SPCA in Houston, Texas.

“Owners told us they figured that their cats could climb up higher on furniture if the water levels rose,” says Nandlal, noting that this belief was seriously flawed: “The water line left on the walls of one home [with four surviving pets] was higher than the highest table in the house. [The pets] had to swim until the water receded,” she says with disbelief.

The Storm After the Storm

To accommodate the numbers of pets being rescued from the hardest hit coastal areas after Hurricane Ike made landfall, the Houston SPCA set up a temporary shelter in Galveston, TX, trucking in tens of thousands of pounds of crates, food, water, litter, newspaper, cleaning and medical supplies, bowls, blankets and other supplies. The rescue efforts also included 20 trucks and

In Houston, the SPCA enacted a fostering program, Operation-Save-a-Life, to keep animal levels manageable in area shelters. In addition, a call center for reuniting pets with owners was enabled, as was an online service. The Houston SPCA also made home visits (to residences in areas in which only first responders were allowed to enter) to check on, feed and water pets left behind by owners.

The Houston SPCA estimates the expense associated with Hurricane Ike to be in excess of $1 million. And, the work is not complete. Houston SPCA staff continues to support Galveston Islands care and sheltering efforts with manpower and supplies. Hundreds of animals left behind in the storm that were not claimed by their owners wait in shelters to be placed. The ripple effect from this disaster is expected to be felt in the area for many months or even years to follow.

Pet owners can learn from the devastation of Hurricane Ike – and ease the stress on their pets and shelters following future natural disasters – by being prepared themselves. The number one rule? “If you are evacuating, you absolutely must take your pets,” stresses Nandlal. If the danger of an impending storm or other disaster is cause for you to leave, it is cause for your pets to leave, too. People often forget, too, that even if a pet that is left behind survives the disaster, it could be days or even weeks before you may be allowed back into your home to care for him.”

To make sure youre ready to take your animal with you – say to a hotel or to a relative who already has pets – make sure you have a portable pet carrier at the ready for quick evacuations, suggests Nandlal. “Label the carrier with your name and contact number [cell phone number is obviously the best choice since you wont be at home if you are evacuating], your veterinarians name and phone number, and someone from outside the area and his/her number. Put the information in a waterproof bag and fasten it securely to the carrier.”

Prepare a container of at least a weeks worth of food and water and be sure to have your cats medications and vaccination records in a place that is easily gathered up and to take with you. Nandlal also recommends bringing your cats favorite toy, blanket or something else that will make your pet more comfortable when in a strange place.

Finally, “always have proper identification for your pet,” says Nandlal, who suggests a microchip ID in addition to a readable tag on a safety collar. “We had an animal come into the shelter that was clearly someones well-groomed, well-cared for pet. When we called the number on the rabies tag, the number had been disconnected,” relates Nandlal. So, be sure that contact numbers on the tag are current and readable, as some older tags can be illegible.