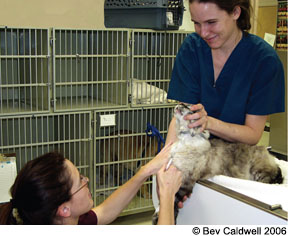 Blood can be the gift of life not just for us, but also for our cats. “A cat suffering severe injury or trauma may require blood transfusions,” says Marjory Brooks, DVM, internal medicine specialist and co-director of the coagulation section at Cornell Universitys Animal Health Diagnostic Laboratory.

Just like human donors, feline donors are required to take a battery of tests prior to giving blood – and not every cat qualifies. One qualification is weight: A donor cat usually weighs from 10 to 12 pounds. “The bigger the cat, the less risk of hypotension (low blood pressure) after donation,” says Dr. Brooks.

Donor cats are screened before they enter a donor program to ensure that they are free of viral diseases such as feline leukemia and feline immunodeficiency virus, and other blood-borne infectious agents such as Hemobartonella or Bartonella. “Before each donation, cats temperatures are checked, and they are given a physical exam to make sure theyre healthy,” says Dr. Brooks.

Donors should be indoor cats that are maintained on a flea-control product and free of intestinal parasites. “Males tend to have a higher red-cell count and heavier body weight,” says Dr. Brooks, which means that male cats tend to make better donors than females. Donor cats are usually two to 10 years old, with no history of pregnancy or prior transfusion because of possible sensitization to foreign blood cells or proteins.

In this case, types A and B refer only to the cats blood types, not their personalities. Unlike humans, whose predominant blood type is type O, the vast majority of cats are type A. Type B is less common and type-AB cats (having red cells carrying both antigens) are extremely rare. Type O does not exist among the feline population, and there is no Rh factor as there is in the human population.

Using a donor that is the same breed as a recipient is no guarantee that the blood types will match. “Theres a different proportion of types in different breeds,” says Dr. Brooks. (Approximately half of British shorthair and rex cats are type B while most domestic shorthairs are type A, for example.)

The blood-type trait is inherited in a recessive pattern like the genes governing hair length. The gene responsible for blood type A antigen is dominant to the gene for type B. A type-A cat may carry the recessive B gene, and two type-A parents could therefore produce type-B offspring if both carry the recessive type-B gene. Two type-B parents produce only type-B kittens. And its possible to have different blood types among kittens in a litter.

Giving a recipient the wrong blood type can have dire consequences. “Giving type-A blood to a type-B recipient causes acute transfusion reactions,” says Dr. Brooks. “It could be fatal.”

Another complication of blood type incompatibility is neonatal hemolysis (also called neonatal isoerythrolysis), a condition occurring when a type-B queen is bred to a type-A tom. Type-A kittens in the litter are at risk for anemia because their type A cells are destroyed by antibodies present in the queens first milk. For this reason, type-B queens should only be bred to type-B toms.

The procedure takes five to ten minutes, during which time about 50 to 60 milliliters (about four tablespoons) of blood are taken. Cats must be heavily sedated or anesthetized while giving blood so they remain still. “Most cats arent patient enough,” says Dr. Brooks. Sometimes the donor is given fluids to combat hypotension.

Who Are the Donor Cats?

Some veterinary facilities maintain onsite donor cats or use blood from commercial animal blood banks. Clinics use various incentives such as health exams, vaccinations, free blood typing and transfusion if ever needed, and recognition for giving the “gift of life” to cats in critical need to entice cat owners to allow their cats to donate blood. At Cornell University Hospital for Animals, blood for patients comes from volunteer donors owned by staff or students. “We decided it was better for the cats if we had owned animals rather than ones kept here,” says Deb Watrous, the licensed veterinary technician responsible for the blood bank. “They seem much happier if they are in their own environment.”