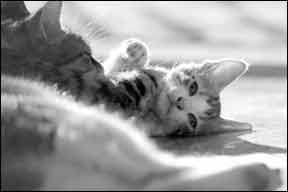 Your seven-year-old cat is a generally healthy animal. In fact, she’s never had a really serious sick-day in her life. But your neighbor’s cat always seems to be ill. Indeed, every few months she shows up on your doorstep wheezing, sneezing and coughing. Her eyes are red and watery, and she acts lethargic. These disturbing signs persist for a week or 10 days, but then she seems to be all right again — for a while.

It’s quite likely that the cat next door is suffering from a deeply rooted upper respiratory infection, a highly contagious disease affecting her nose, sinuses, pharynx and larynx. Why is it, you wonder, that your cat never experiences this problem, while the cat next door can’t seem to shake it?

The answer, most probably, is that you’ve taken your cat to your veterinarian for periodic booster vaccination to protect her against the infectious agents responsible for most feline upper respiratory infections. Your neighbor’s cat, on the other hand, hasn’t seen a vet in years.

Potential Problems. Although the primary clinical signs of upper respiratory infection are troublesome and often debilitating, they are generally transitory and self-limiting — they just come and go without causing enduring harm. However, they can sometimes progress to secondary complications with long-lasting consequences.

These include pneumonia, conjunctivitis or corneal ulcers (vision-impairing eye conditions), and a host of other virus- and bacteria-borne illnesses resulting from the entry of infectious microorganisms into an afflicted cat’s system via the open sores that often break out inside its mouth and on its nose, lips and tongue. In addition, some cats may refuse to eat because of the painful ulcerations in their mouths and may consequently become systemically ill as the result of a nutritional deficiency.

Major Offenders. “About four out of five upper respiratory infections are caused by one of two viruses,” says Fred Scott, DVM, PhD, former professor emeritus of virology at Cornell University’s College of Veterinary Medicine and the founding director of Cornell’s Feline Health Center. An estimated 40 percent of cases are caused by feline herpesvirus (FHV), which is also known as feline rhinotracheitis virus (FRV), and about 40 percent are caused by feline calicivirus (FCV). “The remainder, notes Dr. Scott, “are caused by a bacterial agent called Chlamydophilia felis and other micro­organisms.”

These viruses are usually passed from cat to cat when they lick or groom one another, notes Dr. Scott, or through other direct physical contact. These viruses can also be airborne. “During the acute stage of infection,” he says, “there’s a lot of sneezing going on. An infected cat will blow the virus out into the environment, and cats a few feet away will inhale it. A virus can also be transmitted from an infected queen to her kittens during pregnancy or through grooming them after they are born.”

Disease Progression. Once present in a cat’s system, no medication can make the viruses simply disappear. Herpesvirus will remain in an infected cat’s system forever, resurfacing periodically to cause recurring episodes of fever, ocular inflammation, nasal discharge, sneezing and other signs of rhinotracheitis. As for calicivirus, it will typically vanish from an affected animal’s system within a year or so after the initial infection, but in some cases not until after it has done significant damage to the cat’s upper respiratory system and has opened the pathways for secondary infection.

Herpesvirus, explains Dr. Scott, initially announces its presence by causing acute sneezing attacks in its host. But its impact is felt beyond the respiratory system components. “The virus starts to replicate and destroy cells in the animal’s nose,” he explains. “This will typically be followed by a discharge of fluid from the cat’s eyes. It may be noticeable initially in just one eye, but both eyes will soon be involved. And the discharge will be watery at first, but it may become progressively purulent.  This is often followed by conjunctivitis — inflammation of the mucous membrane that lines the inner surface of the eyelid. And in a small percentage of cats, you may see signs of corneal ulceration.” The length of time it takes for the disease to run its course and for the clinical signs to subside ranges, he notes, “anywhere from a day to a week or so.”

“It’s a very common infection in mature cats that have not been vaccinated against it,” says Dr. Scott, “and almost all of these affected animals will recover. But it can kill very young kittens or those that have been infected in the uterus, because the infection can easily develop into a serious systemic disease.”

The signs and progression of a calicivirus infection are “entirely different,” Dr. Scott points out. “There is less sneezing and not as much eye involvement. But you may see ulcers on the affected cat’s tongue, lips and sometimes around its claws. And some strains of this virus can cause fatal pneumonia.”

As with herpesvirus, he says, kittens are significantly more susceptible to serious systemic disease — especially pneumonia — resulting from a calicivirus infection. “Kittens are protected for a few weeks by the natural immunity they’ve gotten from their mothers,” says Dr. Scott, “but they become susceptible after that immunity wears off.”

Dr. Scott urges all cat owners to make sure that their cats are vaccinated according to the schedules recommended by veterinarians. Unfortunately, no vaccine is 100-percent effective. Although all existing vaccines are apt to reduce the severity of viral infections, none can be guaranteed to immunize all cats against the organisms that cause upper respiratory disease. Also, new strains of  feline calicivirus are continually evolving; therefore, the efficacy of current vaccines may diminish as time goes by. 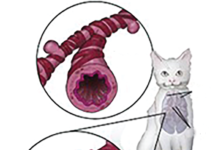 Asthma Can Be Controlled