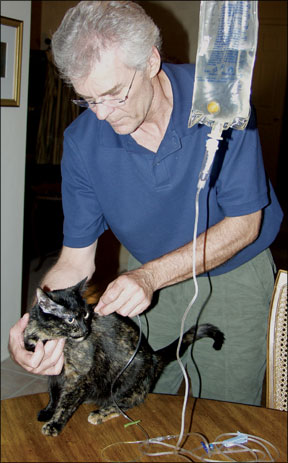 Chronic renal failure in a cat occurs when 75 percent or more of the animals healthy kidney tissue has been destroyed and replaced by scar tissue. As a consequence, the two kidneys, each of which contains many thousands of tiny filtering units (nephrons), are unable to carry out their chief function of removing metabolic waste from the blood that is pumped through them with each heartbeat.

To compensate, most afflicted cats will drink increasing amounts of water in an effort to pass additional fluids through their kidneys. Unfortunately, this water will run quickly through the animals body; the cat will simply urinate more frequently. Meanwhile, the ultimately life-threatening metabolic waste will continue to circulate and to accumulate.

Eventually, the cat will be unable to take in enough water to compensate for the amount that is being shed as urine, and this fluid deprivation is likely to result in progressive dehydration. In addition to weight loss, the signs of dehydration include lack of appetite, listlessness, vomiting and constipation. If untreated, the loss of body fluid and vitally needed chemical constituents – proteins and electrolytes, for example – that the fluid contains will eventually prove fatal.

Although chronic renal failure is incurable, an affected cats life may be extended significantly – for years, in some cases – by the close monitoring of its hydration status and the routine replenishment of its body fluid levels. In cats with advanced kidney disease, treatment may require periodic hospitalization, during which the necessary fluids are delivered intravenously over the course of several days.

Another approach that has been gaining increased attention and acceptance during recent years is the routine injection – at home and by the cats owner – of fluids under an animals skin several times a week or more, a procedure called subcutaneous fluid therapy. “If theres no other reason for an animal to be hospitalized, this procedure can and should be done at home,” says Richard Goldstein, DVM, an associate professor of small animal medicine at Cornell Universitys College of Veterinary Medicine.

“At first, people tend to think that they wont be capable of doing it, but they do learn. Once you get over the fear that the needles will hurt the cat, youll find that injecting the fluid doesnt really pose a problem. Actually, giving a cat an injection tends to be much easier than giving it pills.” At the Cornell University Hospital for Animals, he notes, hundreds of cat owners have been taught the techniques involved with at-home subcutaneous fluid therapy during the past few years; he speculates that thousands of owners throughout the U.S. are now routinely practicing it.

If your cat is suffering from chronic kidney disease and you are unwaveringly committed to improving its condition and extending its life for as long as possible, you should see your veterinarian for instructions on at-home subcutaneous fluid therapy – the procedure and the equipment youll need to carry it out. Indeed, Dr. Goldstein advises, you should by no means attempt it without being appropriately trained by a veterinary professional; under no circumstances should you use equipment that has not been specifically supplied or recommended by your veterinarian; and you should inject no fluid into your cat that the veterinarian has not prescribed.

“You cant inject straight water into a cat,” he points out, “because that could result in serious tissue inflammation. The fluid that the veterinarian prescribes will be a mix of water and various substances, such as potassium or sodium, that the veterinarian has determined to be appropriate for your specific animal. In general, these solutions are similar to those delivered intravenously in a clinic, but they will vary depending on your cats condition, age, electrolyte balance and various other factors.”

Your veterinarian will supply you with the equipment youll need to feed the fluid into your cat, says Dr. Goldstein. In some cases, the fluid can be administered using a syringe and needle, but in most instances the procedure will require three devices: a bag containing one liter or so of the prescribed fluid; a drip set, which is a long tube leading from the fluid bag to a hub into which the needle is secured; and, of course, a needle, the gauge of which will depend on the speed at which the fluid is to be injected as well as the animals tolerance of the injection procedure.

When the fluid bag, drip set and needle are appropriately connected, the fluid bag must be suspended above the patient so that gravity will allow the fluid to flow properly. The cat is placed on a work surface, such as a counter top or floor, and held gently but securely (perhaps by a second person); the needle is deftly inserted into a thick fold of skin at the back of the neck; and a clamp on the drip set tube is released to initiate the fluid flow.

The duration of the procedure can range from 10 minutes to a half-hour, says Dr. Goldstein, depending on the prescribed amount of fluid involved and the size of the needle. “The larger the needle,” he notes, “the faster the procedure. But some cats wont tolerate the initial prick of a large needle, so youll have to use a smaller one, and this will make the procedure last longer.”

A single procedure will typically call for the subcutaneous injection of two to five ounces of fluid. “If youre starting early in the disease process,” says Dr. Goldstein, “it will have to be done two or three times a week. As the disease progresses, you may have to do it every day. Most cats will tolerate the procedure very well. In fact, they may be content to lie quietly in your lap while youre watching television, with the bag and drip set suspended from a coat rack next to your sofa or from a hook on the wall.”

Owners who are reluctant to routinely inject a needle into their cats should ask their veterinarians about a semi-permanent surgically implanted device that has a narrow opening on its exterior into which the end of the drip set tube is inserted directly. “No needles are involved,” Dr. Goldstein points out, “and this can be a solution for squeamish owners. But these catheters can be a source of infection, so owners who use them must be especially diligent about keeping them clean.” As with all aspects of subcutaneous fluid therapy in the home setting, he advises, owners must be in touch with their veterinarians every step of the way.