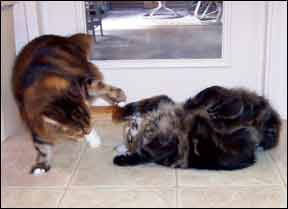 We all know people that we try to avoid, but what if your cat develops an unpleasant attitude? What if one cat attacks another in your home, or even your dog — or even you? Territoriality and fear are usually the causes. Luckily, both can be controlled with some patience and understanding.

Cats don’t plan these unpleasant behaviors to bother you. They aren’t plotting ways to punish you, either. “It’s more likely that your cat is saying, ‘Hey, this is my house,’” explains Katherine Houpt, VMD, PhD, and the emeritus James Law professor of Behavior Medicine at Cornell University’s College of Veterinary Medicine.

Probably more than fifty percent of cat behavior is genetically programmed. Cats were originally solitary hunters and territorial animals. Cats began to live together in social groups only when humans began to provide concentrated sources of food.

Early Socialization is Key. The critical period for the socialization of cats is two to seven weeks of age. During that time, kittens should meet other cats, humans and dogs, if possible. Cats not socialized appropriately may end up as difficult adult house cats. Obviously, a one-cat household will have fewer socialization problems than two-cat households. And having three cats in the house almost always leads to some trouble — aggression, spraying or litter box infractions.

The problem can develop over something as simple as taking one cat to the veterinarian. “Your other cat may not recognize him upon his return. The returning cat acts or smells differently,” explains Dr. Houpt. Or, perhaps, a new cat joins the household. “It’s not necessarily the original cat that’s the aggressor; it can be the new cat,” she says.

House size can also be a factor. Cats will sometimes divide the house, so that you have an upstairs cat and a downstairs cat. If this arrangement occurs and seems to work well, keep the litter boxes and food areas separated as well.

The Evil Stare. Besides obvious behaviors, how do you know when an attitude develops? Cats stare, says Dr. Houpt. And they walk with their hind legs extended so that their backs slope from tail to shoulder. Sometimes they make caterwauling sounds and hissing noises (although hissing can also indicate fear).

In addition, a cat staring at a human in irritation may lash its tail from side to side and point its ears backward. “A wagging tail is a happy dog and an angry cat,” says Dr. Houpt.

One way to discourage staring and tension between cats is to put a bell on the aggressor, so at least the other cat will receive a warning. “It is very important that the victim not be frightened of the other cat,” explains Dr. Houpt. One elaborate way to reintroduce cats if they become hostile is to keep the aggressor in a less desirable area of the house behind a solid door, gradually replaced by a plastic door, a screen door or a door opened just a crack.

Or the aggressor can be put in a cage while the other cat remains free. But feed the cats their meals together, although initially with their food bowls on opposite sides of the room. Gradually, move their food dishes closer together. When the aggressor is first let out of the cage, keep him on a harness.

Medication for both cats — prescribed by a veterinarian — may be useful to reduce aggression in one cat and reduce anxiety in the other. And don’t introduce a puppy to an adult cat if you can help it! “What is play to a puppy is torture to an adult cat,” says Dr. Houpt.

Humans as the Target. Cats go after humans as well, especially after what they may consider to be a threatening experience. Most often, it’s a case of redirected aggression: A cat seeing another cat outside the window may become aroused and attack his companion cat, a dog or even his owner. “The cat simply picks the handiest target,” says Dr. Houpt. “It’s a good example of how tenuous feline social bonds really are.”