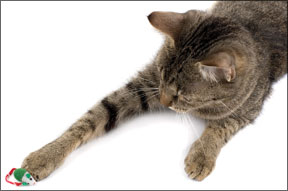 Cats are known to be fastidiously discriminating in their eating behavior. Compared to dogs, they are extremely cautious about what they take into their mouths. Owing to their finicky habits, a cat is unlikely to ingest anything that could cause it to choke.

But accidents do happen. A cats environment is full of countless little objects, from sticks, stones and rodent bones – to thimbles, buttons, rubber bands and strands of yarn. If a cat inadvertently

takes such a foreign object into its mouth, is not immediately able to disgorge it and attempts to swallow it, the animals upper respiratory apparatus can become blocked and its oxygen supply can become seriously diminished or totally impeded.

Oxygen deprivation can cause death within a matter of minutes. Therefore, any signs of choking must be viewed as an emergency situation requiring immediate attention. However, says Gretchen Schoeffler, DVM, chief of emergency and critical care services at the Cornell University Hospital for Animals, veterinarians rarely treat cases of feline choking. This is because such traumatic events tend to be either (1) self-limiting; (2) relieved thanks to prompt action by an affected animals owner; or (3) fatal before veterinary help can be obtained.

According to Dr. Schoeffler, a traumatic obstruction can occur at virtually any point within the array of tubular structures (larynx, trachea and bronchi) that channel inhaled oxygen into the lungs. An obstruction in the esophagus, the tube that enables food to pass from the mouth into the stomach, can also cut off the oxygen supply to the lungs if the ingested object is large enough to exert pressure on the adjacent airways. A serious blockage can even occur high up in the pharynx, the hollow structure at the back of a cats mouth that opens into the larynx and esophagus.

A choking cat will be obviously distressed. “If the obstruction is lodged high up in its airway,” says Dr. Schoeffler, “the animal will probably paw at its mouth. And due to a lack of adequate oxygen circulating in its system, the mucous membranes in its oral cavity will be pale, maybe even blue, instead of the normal pink color. If the cat is unable to take in air, it may become panicked, which will make it quite dangerous to deal with. As it struggles for breath, the stress will increase – and if you try to touch the cat, it may bite you and try to get away.” If a partial obstruction is present, she notes, the animal may breathe noisily. If its a case of total obstruction, the cat may lose consciousness and be “scarily quiet.”

The first order of business in treating a choking cat, she advises, is to place the animal as gently as possible in its carrier and drive immediately to the nearest veterinary clinic. Although the animal may be flailing about in a panic, do not attempt to restrict its movement by wrapping it in a blanket or towel. “If the cat is already stressed,” says Dr. Schoeffler, “restraining it could make things even worse. It could put it over the edge.”

Only if the cat loses consciousness on the way to the clinic, should you pull over and attempt to relieve the obstruction yourself. Gently tilt the animals head back and pry its mouth open. If you can spot the object that is blocking its airway, you may be able to remove it manually. “But dont try this if the cat hasnt passed out,” cautions Dr. Schoeffler. “Otherwise, youre sure to be bitten.” And do not attempt to retrieve the object with a tool such as tweezers or a needle-nosed pliers. “The cat might move suddenly,” she points out, “and the tool could puncture the soft tissues in its airways. Or it could bite down on the tool and break its teeth.”

You also might try to expel the offending object, she suggests, by trying a modified Heimlich maneuver. That is, put the unconscious animal on its side or stomach and, using both hands, apply pressure behind its rib cage. “Push sharply and briskly, but not too hard, inward and upward, quickly and repeatedly, toward its diaphragm,” she says. “This might dislodge the object. You might also try to pick the cat up, hold it securely under its back legs with its head pointing downward, and gently shake it. Gravity might help to dislodge it.”

If none of this works, Dr. Schoeffler says, “Your only alternative is to get back on the road, drive the cat straight to the veterinarian, and hope for the best.”