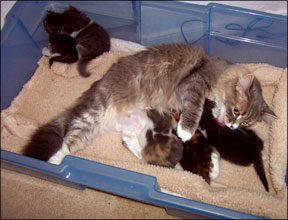 For cat lovers, few things are more pleasurable to witness than the astounding progress that a kitten makes in terms of physical development during the first year of its life. Typically weighing about three and a half ounces at birth, a kitten – if properly fed – will gain as much as a half-ounce per day; its birthweight will double in the first week; and it will have tripled its birthweight by the time it is three weeks old. As the weeks pass, the little creatures rate of growth rate will gradually slow, but it will reach its adult size by the it is 10 or 12 months old.

Passage through the first year – transitioning from total dependency on its mothers milk to the cutting of its baby teeth and its introduction to an adult diet – can present a formidable challenge to a young cat. Throughout this period, during which the kitten’s weight increases 50-fold, it can use all the loving care and attention it can get from its owner, especially in meeting its nutritional needs.

Unless afflicted with a congenital physical defect or inherited disease – or unless its mother for some reason is unable or unwilling to let it suckle – a newborn kitten will typically thrive perfectly well for four to six weeks solely by nursing at its mothers breast. According to Francis Kallfelz, DVM, the James Law Professor of Veterinary Nutrition at Cornell Universitys College of Veterinary Medicine, “Mothers milk is natures most nearly perfect food. It meets all of a kittens nutritional needs. Its rich in protein and minerals and is appropriately balanced in carbohydrates and fats.”

During the nursing phase, the owners main responsibility is to make sure that the mother cat, or queen, and her offspring have a warm, clean, quiet environment in which to nurse peacefully. The nursing should be monitored, however. Restlessness or persistent crying on the part of the kittens may indicate that theyre not getting enough milk. Illness can sometimes leave the queen unable to produce sufficient milk.

“If the queen becomes ill,” says Dr. Kallfelz, “its quite possible that shell be reluctant to nurse, and her kittens wont get enough nourishment. In that case, the owner may have to switch the kittens to a milk substitute and feed them with a bottle.” Cows milk or human baby formula can be used temporarily, he says, but the nutrient content of these substitutes is not suitable for long-term use, since they may cause diarrhea or other gastrointestinal upsets. Instead, kittens that are not nursing sufficiently should be fed a commercial feline milk replacement formula that closely matches the nutritional makeup of a queens milk.

A substitute may also have to be used if the queen simply stops producing a sufficient supply of milk. “The best way to determine whether a kitten is getting enough milk is to weigh it every few days,” says Dr. Kallfelz. “As long as it is constantly gaining, thats fine. But if its pattern of gaining starts to slacken off – if, that is, the kittens weight falls below the normal growth curve – thats a good indication that the queen is not producing an adequate supply of milk or that other nursing problems have arisen.”

At five to seven weeks of age or so, the typical kitten will be ready for weaning – the gradual reduction in its consumption of mothers milk and a correspondingly gradual introduction to solid food. “The time for that has come,” says Dr. Kallfelz, “once they are old enough so that their eyes are fully open and they are making purposeful movements – not just thrashing around.”

During this same period, a kitten will start teething, and its mother will presumably welcome the relief from having her nipples bitten during nursing. A kittens so-called milk teeth start to appear when it is about four weeks old, and by six weeks of age or so, a full complement of 26 teeth will be present. (By the time the kitten is about six months old, the deciduous teeth will have fallen out and been replaced by 30 permanent teeth.)

Perhaps the most obvious indication that the time for weaning has arrived, says Dr. Kallfelz, is that the kitten is constantly trying to “get at the queen” – and the queen “is clearly not receptive.”

Initially, says Dr. Kallfelz, a kitten should be fed a complete and balanced diet formulated for kitten growth – either a canned food or a dry food moistened with water and mashed to make it readily edible. “At first,” he suggests, “put some of the food on your finger and place it in the kittens mouth so that it gets used to the taste and feel of it. Be careful to use only a little bit so that the animal doesnt choke. Then you want to start gradually increasing the amount. If youre using a dry food, you can reduce its moisture content as the kitten begins to eat more.”

A kittens food intake will usually be, so to speak, self-governed. That is, the animal will naturally limit is consumption of solid food in relation to its stomach capacity. Several feedings throughout the day – every four hours or so – will prevent overloading the little animals digestive system and kidneys with fewer, larger feedings. The number of feedings can be decreased and the intake per feeding can be increased appropriately as the kitten matures.

“To start,” Dr. Kallfelz suggests, “put the food in a shallow container – a pie pan, for example – so that the kitten can get at it easily. During these feeding sessions, be sure to keep the queen somewhere else. You want to make sure that she doesnt steal the food.”

Fluid intake should be avoided in the early stages of weaning, when the kitten continues to receive adequate liquid from the queens milk. However, Dr. Kallfelz suggests, “As soon as the animal starts routinely consuming solid food, you should certainly start making water available to it, since milk production by the queen will decrease as the kittens rely more and more on solid food and it is important that adequate hydration be maintained.” Most cats, he notes, will be completely weaned and consuming adult diets by the time they reach the age of 10 weeks or so.